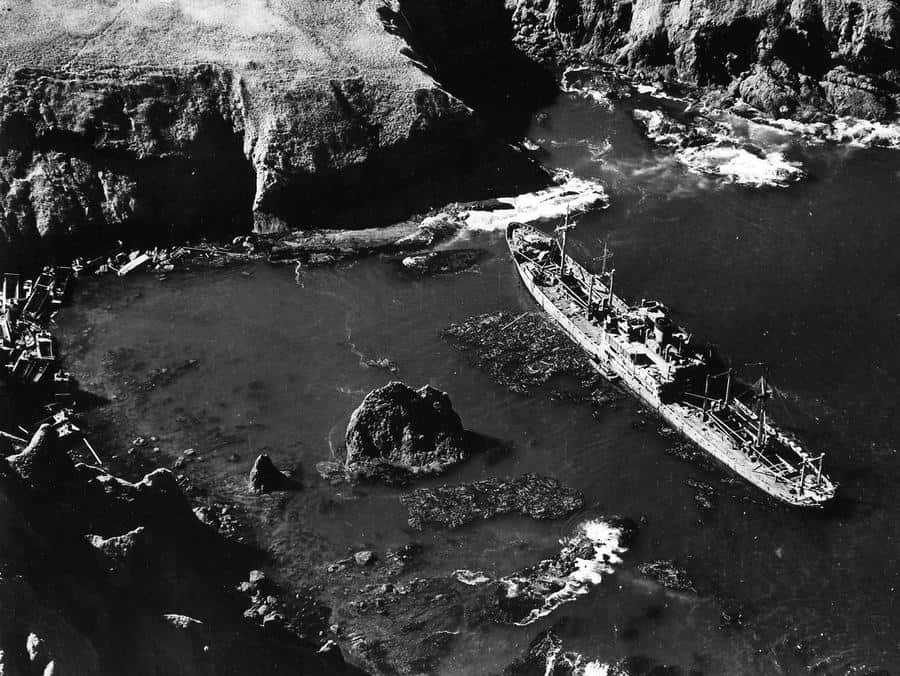 “Damn American dogs, we massacre you!” a Japanese soldier screamed through the fog toward the cold, hungry and exhausted American soldiers huddled below in valley foxholes on the island of Attu in Alaska.

In the Spring of 1942, Japan basked in the glow of victory. During the six months since the bombing of the U.S. fleet at Pearl Harbor, Japan had launched a series of overwhelmingly successful offensive campaigns throughout the southern and western Pacific.

Rather than consolidate, however, Tokyo endeavored to quickly expand their hegemony in the Pacific region. Though, two recent setbacks accelerated an already ambitious timetable.

In early May, the U.S. Navy thwarted an early invasion of Australia by checking a powerful Japanese fleet in the Coral Sea. Though far less strategically important, the brazen air raid on Tokyo by 16 U.S. B-25 bombers on April 18, 1942 caused alarm in the halls of both the Japanese Diet and Imperial General Headquarters.

Led by Lt. Col. James Doolittle, the bombers took off from the aircraft carrier USS Hornet, an unprecedented tactic. Confounded, Japanese leadership believed the attack may have been generated from a secret base in the western Aleutians.

An American territory extending 1,000 miles west from the Alaskan Peninsula, the Aleutian archipelago provided a natural avenue of approach between both countries. Though not as harsh as the arctic climate of the Alaskan mainland, the Aleutians are perpetually shrouded in fog and experience wind gusts of up to 120 mph known as the ‘willawaw.’ Sparsely populated and bereft of natural as well as man-made resources, the Aleutians presented a challenging environment for any army.

Admiral Isoroku Yamamoto, one of Japan’s most capable commanders, developed plans to invade and occupy strategic points in the Western Aleutians as well as Midway Island. He envisioned both as bulwarks in a defensive perimeter linking the north and central Pacific. Using the Aleutians and then Midway as bait, he intended to lure the already diminished U.S. Navy from Pearl Harbor before annihilating the exposed U.S. Pacific Fleet.

Yamamoto believed an attack on the Aleutians in early June would draw U.S. warships away from the more strategically important Midway Island. The Japanese could then seize Midway and intercept the returning American fleet responding to defend that critical island.

In June of 1942, Japanese forces launched air attacks on military installations at Dutch Harbor on Unalaska and made subsequent landings on two Aleutian Islands, occupying Attu and Kiska.

By that stage, however, American cryptanalysts had cracked the Japanese naval code furnishing the U.S. Navy with insight into their rival’s order of battle.

Of course, U.S. Navy Admiral Chester Nimitz did not take the Aleutian bait instead exercising patience before ultimately striking the decisive blow of the Pacific War at Midway. About 15,000 Japanese Imperial Army soldiers remained entrenched but isolated on both Attu and Kiska Islands.

On May 11, 1943, approximately a year later, a large-scale U.S. invasion force steamed along the furthest edge of the American frontier in the direction of Attu, a volcanic island equidistant from Tokyo and Juneau.

Many of the 12,500 7th Infantry Division soldiers on the approaching transports had extensively trained for desert warfare at Ft. Ord, California. Conditioned for the heat and sand of North Africa, the motorized unit did not appear naturally suited for the Alaskan assignment. To Army commanders, though, the unit’s high state of readiness and proximity to the Aleutian Islands mitigated any training deficiencies or supply shortfalls.

Despite the abrupt operational shift to the colder climate of Attu and anticipating a quick three-day clash, 7 ID soldiers had not been issued proper winter weather gear. This appalling logistical oversight would prove consequential as the majority of casualties sustained in the campaign would be attributed to exposure or lack of adequate supplies.

Regardless of these and a host of other unknown variables, Operation SANDCRAB was underway.

Though delayed by fog, troops landed uncontested at both the Holtz and the ominously named Massacre Bay disembarkation points. Expecting fierce resistance, the soldiers were relieved to arrive unopposed, many marveling at the eerie quiet and treeless landscape.

However, the respite would be brief.

The tedious advance dictated soldiers examine every foxhole, trench and dugout for the tell take wires that signaled a booby trap. Wounded Japanese soldiers, abandoned by comrades, would often wait for approaching GIs before detonating a grenade killing themselves as well as the Americans. These tactics conditioned soldiers to shoot first and few prisoners were taken on either side during the brutal close quarters fighting. Unnoticed at night, Japanese soldiers would stealthily crawl through the fog and darkness toward the American listening posts. Brandishing knives and Samarai swords, the Japanese sappers would simultaneously attack the enemy scouts by silently slitting their throats. With no alarm raised and a wide gap created in the U.S perimeter, the Japanese infantry would then launch massive banzai charges against the oblivious, vulnerable troops.

In some respects, the fighting on Attu was typical of combat in the Pacific; small units engaged in savage fighting. Though the lack of supplies and frigid temperatures created a unique misery as well as a common enemy.

Though logistical problems soon became acute for both sides.

The lack of food compelled some American soldiers to toss grenades into the bay in hopes of catching fish to eat. Provisions recovered on raids to enemy camps would trigger fistfights among famished U.S. troops. Suffering from frostbite, soldiers would often confiscate the warmer coats from dead Japanese, an extraordinary step due to the risk of an all too frequent and lethal threat on Attu: friendly fire.

As well, the promise of the anticipated air support from nearby USAF in Amchitka failed to materialize due to the adverse weather conditions.  Many aircraft crashed into uncharted hills obscured by fog or were often grounded negating an assumed strategic advantage.

However, the Aleutian weather could be an erstwhile ally as the Japanese discovered one early evening as hundreds of Imperial troops attempted to withdraw from mountain positions to link up with the last of the remaining units at Chicagof Harbor.

On the afternoon of May 18, the omnipresent fog suddenly lifted and the clouds parted to reveal unfamiliar blue skies as well as brilliant sunshine.

For most of the afternoon, Captain Jim Simons’ artillery battery had been taking fire from unknown enemy positions on a nearby mountain. Looking through binoculars, Simons was amazed to see about 400 Japanese zigzagging up the steep snow-covered incline. He quickly turned his cannons on the retreating troops but realized his guns were well out of range. Before Simons could give an order to adjust fire, he heard the engines of P 38 Lightning fighter-bombers approaching from the direction of Amchitka.

“The Lightnings came over in a formation of eight, quickly judged the situation and went to work. They cut their motors out and glided in over the Japs. The heavy machine guns spat fire, lead and death. We could hear their screams and after a few more turns by the Lightnings, all movement stopped on the trail. Dead Japs lay in the snow.  It was the biggest killing so far.”

As the 18-day battle reached its bloody finale, American soldiers would be involved and bear witness to more killing. Indeed, they discovered that Japanese doctors had killed the remaining patients treated in the field hospitals in a case of sanctioned suicide.

In Japanese culture, surrender was considered so shameful that death-even suicide- was preferable.

Dr. Paul Nebu Tatsuguchi described the macabre practice of ‘gyokusai’ a euphemism for mass suicide in the name of Emperor Hirohito in his personal diary:

“The last assault is to be carried out. All the patients in the hospital are to commit suicide. Only 33 years of living and I am to die here. At 1800 (hours) took care of all the patients with grenades. Good-bye, Taeki, my beloved wife, who loved me to the last.”

For the U.S. Army, the victory at Attu came at great cost and the after-action reports would be damning. During the 18-day battle, American soldiers would sustain more casualties due to weather and lack of supplies than enemy action. (2,100 to 1,700 killed or wounded by the Japanese)

Attu was among the deadliest campaigns of the war.

Approximately 71 U.S. soldiers were killed for every 100 Japanese making the price of securing Attu second only to the invasion of Iwo Jima.

Operation COTTAGE had begun and similar to Attu, North American forces encountered no resistance. A thorough search of the island yielded only the abandoned gear and equipment left by the 5,200 Japanese troops who had been evacuated undetected weeks earlier.

Despite the enemy’s absence, however, American and Canadian troops sustained significant casualties due to booby traps and a series of friendly fire incidents.

Kiska was in full allied control by August 24, 1943. The primary American objectives had been achieved.

Though successful, the 15-month Aleutian campaign was marked by command failures, neglect, unsanitary conditions, friendly fire, poor morale and savage combat. Attu and Kiska would be the only battles to take place on American soil during the Second World War but have drawn surprising little attention in the following decades.  Like many notable figures at this time, Dashiell Hammett, the celebrated writer, enlisted in the Army in 1942. The 48-year author of the Maltese Falcon traded Hollywood glamour a drab Quonset hut on the Aleutian Island of Adak. Cpl. Hammett of the 338th Special served as the editor of the base paper. He described the Aleutians as the ‘least known part of America’ and perhaps for this reason the bloody campaigns of Attu and Kiska are the least known battles of World War II.