Today in military history: US drops atomic bomb on Nagasaki - We Are The Mighty

Today in military history: US drops atomic bomb on Nagasaki 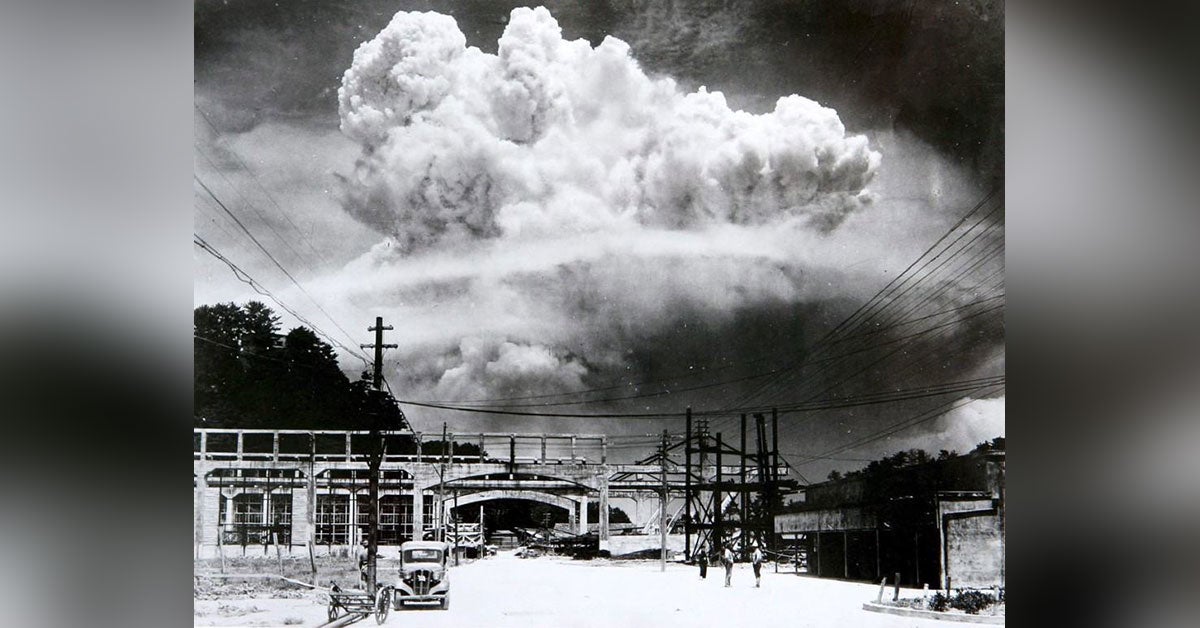 On Aug. 9, 1945, the United States dropped a second atomic bomb on Japan at the city of Nagasaki.

Three days earlier, the U.S. struck the Japanese city of Hiroshima with the first tactical use of an atom bomb in military history.

Yet Japan continued to fight.

The city of Kokura was the original target but a layer of clouds concealed the area that morning, causing the B-29 Superfortress “Bockscar” to divert to its secondary target, Nagasaki, a major shipbuilding city with a large military port.

“Suddenly, the light of a thousand suns illuminated the cockpit,” remembered Bockscar co-pilot Fred Olivi. “Even with my dark welder’s goggles, I winced and shut my eyes for a couple of seconds. I guessed we were about seven miles from ‘ground zero’ and headed directly away from the target, yet the light blinded me for an instant.”

Somewhere between 70,000 and 80,000 people were killed, with tens of thousands more wounded.

One man, Tsutomu Yamaguchi has the dubious distinction of having been within two miles of both blasts.

Yamaguchi designed tankers for Mitsubishi Heavy Industries. He was in Hiroshima on Aug. 6, 1945 finishing up a three-month business trip to the shipyards there when he was blown over by the blast and knocked unconscious. He woke up in time to see a pillar of fire over the city that eventually bloomed into the darkly iconic mushroom cloud shape of a nuclear explosion. He was less than two miles from the epicenter of the explosion.

He rushed to an air raid shelter where he found two of his colleagues who were on the trip with him. They rushed to grab their belongings and flee back to their hometown of Nagasaki.

He made it to the hospital in Nagasaki and was treated for the burns that covered much of his body. Despite his injuries, he reported Aug. 9 for work at Mitsubishi.

Again, Yamaguchi was less than two miles from the bomb when it detonated. The second blast blew off his bandages and severely injured the man he’d been talking to.

This time, the hospital that had treated Yamaguchi was destroyed so he simply ran home. He sheltered there, dazed by a bad fever until Aug. 15 when he heard that Japan had surrendered.

Yamaguchi went on to become an advocate against nuclear proliferation. In 2010 he died of cancer.