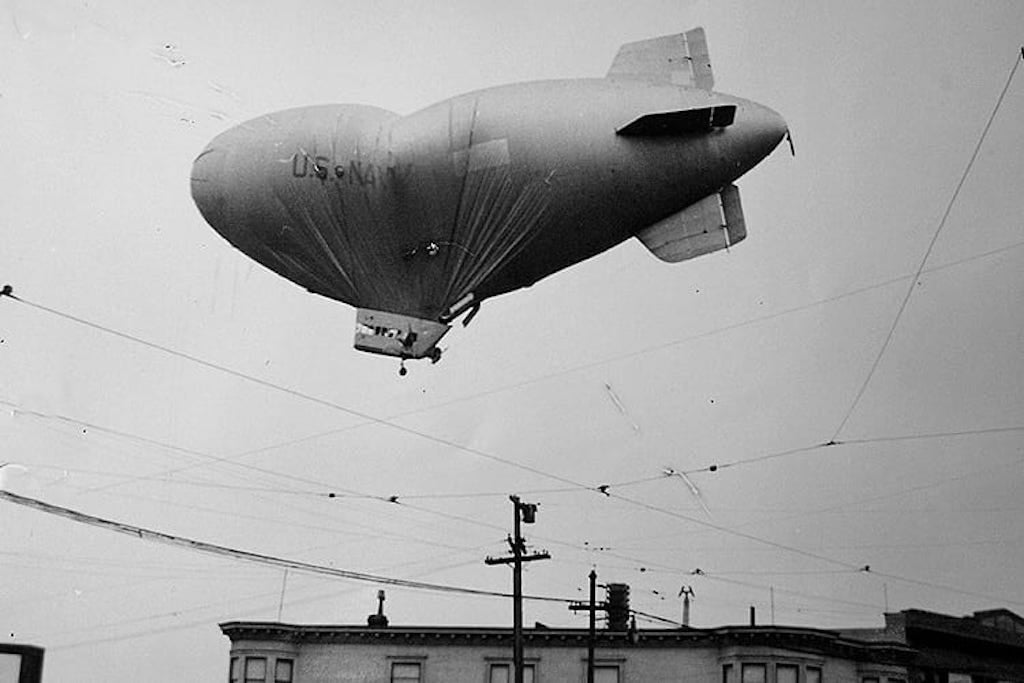 The derelict L-8, floating over San Francisco after the disappearance of its crew.

In the early days of the World War II, blimps were an important part of aerial defense and after the surprise attack on Pearl Harbor, major American cities wanted them, especially on the West Coast. A blimp could give cities advance warning of any incoming enemy attacks, while keeping an eye out for enemy submarines, so the U.S. Navy dispatched them to cities like Los Angeles and San Francisco.

But blimps, like many war materials and vehicles, were in short supply at the beginning of World War II, so the Navy got some help from the first name in blimps, the Goodyear Company. Goodyear began cranking out L-class blimps to meet the cities’ needs. One of these, a former advertising blimp, was sent to Moffett Field, California for duty before being transferred to Treasure Island.

Numbered L-8, this blimp was assigned to a four-hour patrol off the coast of Northern California that would take it to a series of islands in the Pacific and back to the mainland. When L-8 took off from its Treasure Island home station in San Francisco Bay on August 16, 1942, only two men were aboard for the submarine patrol. They would never be seen again.

Lieutenant Ernest Dewitt Cody and Ensign Charles Ellis Adams departed Treasure Island at 6 a.m. local time. Little more than an hour and a half later, they radioed their position back to base and mentioned they were investigating an oil slick on the surface near the Farallon Islands. This position was confirmed by two civilian vessels who passed through the area.

Both the fishing vessel Daisy Gray and Liberty freighter SS Albert Gallatin confirmed that they saw the L-8 in the area it reported, hovering there for around one hour on August 16. The Daisy Gray saw that the blimp was flying low, and worried that it would drop depth charges, it pulled in their nets and left the scene.

But by 10:30 that morning, L-8 was unresponsive and the reason why is unclear. At 11, an Army aircraft reported seeing the blimp, saying that nothing seemed abnormal. Yet, the next time the airship was sighted, it was partially deflated and headed toward the San Francisco coastline 15 miles from San Francisco itself.

The blimp crashed into a golf course near San Francisco, a hit that rocked the ship and made it drop one of its depth charges. A last gust of wind brought it into the air again, where it drifted another 15 miles to Daly City, where it finally came down amid electrical wires and houses. When onlookers made their way aboard the downed dirigible, there was no one else on the blimp.

A Samaritan who ran toward the accident found the ship’s door wide open upon arrival. There was no trace of the two Navy officers. Daly City residents and firefighters retraced the path of L-8’s drift from the coastline looking for them, but no trace was ever found.

Back in the blimp’s gondola, everything appeared to be in normal working order. The logbook was still on the ship, as well as its parachutes and life raft. The radio still worked and the ship’s weapons were still in place and operational. The only thing that was missing were the life jackets, which were normally worn by crew members while the blimps were in operation.

Within two days an investigation was launched. It found there was no mechanical problems with the blimp that would have led the crew to abandon it. Weather conditions were also ruled out as a reason. There was no evidence of foul play or sabotage and since witnesses saw the ship during its investigation of the oil slick, it’s unlikely they accidentally fell from the blimp.

By the end of the year, the two men were declared dead, but the Navy could not list a reason why. To this day, there has been no evidence or trace of the two men since they left Treasure Island and were spotted by the Daisy Gray. Even the Japanese didn’t take credit for the disappearance.