Devotion: A film review - We Are The Mighty 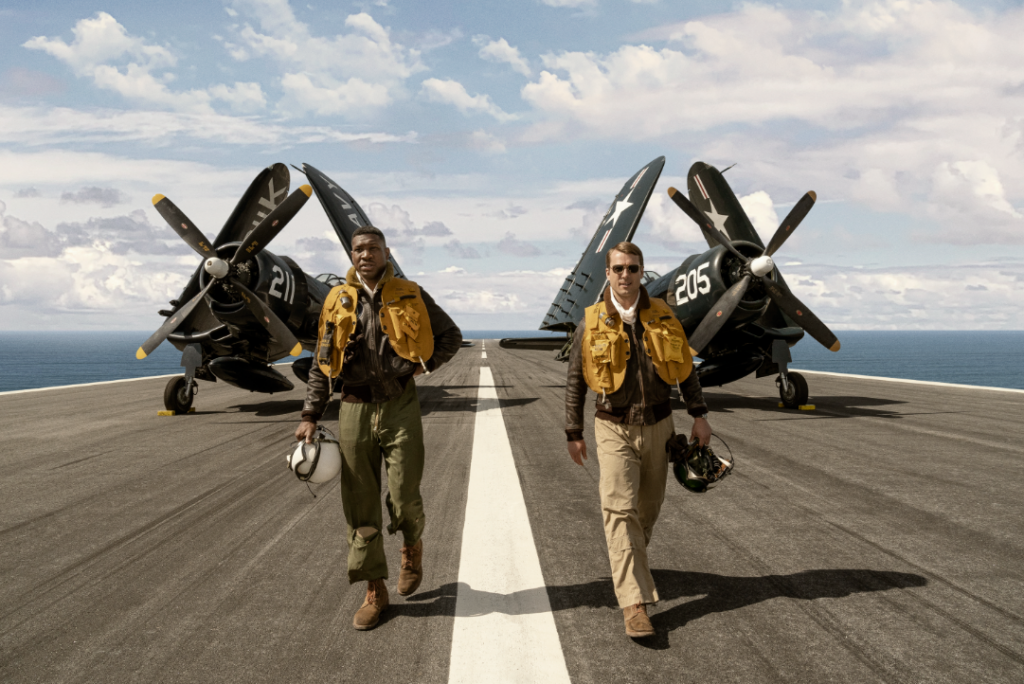 Devotion is a film of epic proportions based on the true story of Jesse L. Brown from the book of the same name by Adam Makos. The book is worth reading before or after seeing the film. You could be distracted by the beautiful cinematography, aerial effects and the real aircraft used in the film such as F4U Corsair, AD Skyraider and F8F Bearcat however it is not possible to miss the heart and soul of the story about Jesse L. Brown.

The fine actors, direction by J.D. Dillard, producers at Black Label Media and production team who bring it to the silver screen make sure you witness the struggles Brown faced being the first African American Naval Aviator. They also bring rich character development to the story’s main characters, which makes for great cinema.

From start to finish Devotion is a breathtaking journey of one man’s dream to fly and to continuously overcome barriers in his way while ensuring he remained a steadfast teammate to his fellow pilots and devoted husband and father. Although understated, Brown relies on his faith to make it through tough times and to keep going in the face of much opposition.

We are introduced to Jesse L. Brown, played by Jonathan Majors, his wife Daisy, acted by Christina Jackson and his young daughter Pamela early in the film, which helps us understand his motivations. We are then introduced to Tom Hudner, portrayed by Glen Powell, as he arrives at Jesse’s squadron. The normal military camaraderie occurs which helps establish the characters and tone of the film. Majors brings much depth to his portrayal and truly understands the pain and hardship Brown endured during his lifetime. Powell has a strong grasp of Hudner’s character and patriotism as well, which he brings to the screen in a classy Golden Age of Hollywood fashion.

Brown takes Hudner on an initial test flight around the Quonset Point Naval Air Station in Quonset, Rhode Island, and shows him the ropes. Brown even buzzes his home where his wife and daughter are at. We witness touching moments with Jesse and Daisy on the beach before his deployment. The squadron then deploys on the USS Leyte out to the Mediterranean with Brown and his shipmates visiting Cannes and getting the opportunity to meet a famous movie star at the time.

Throughout the film’s course, the time together of Brown and Hudner allows us to see them bond and form a true brotherhood as friends. The USS Leyte is called to Korea from the Mediterranean and that’s when the real action begins. The ground combat between the U.S. military and North Korean forces is intense, especially in the brutally cold Chosin Reservoir during the Korean War. Brown and his squadron engage the enemy in some fantastic acrobatics and a bombing run with a lot of enemy aircraft fire going on. We observe Brown in high-level action to include some beautiful cinematography and effects in these sequences. The Marines are under attack and appreciate the support of Brown and his fellow Navy pilots.

To keep the suspense, you will have to watch the film to experience the rest and meaningful finish of the story. Devotion gets a four out of four red-star clusters in my book and should be on everyone’s to-watch list this holiday season. You get patriotism, brotherhood and a quality American film to watch with your loved ones that will stand the test of time. Go see it and be inspired in a theater near you!