This is the history behind Napalm - We Are The Mighty

This is the history behind Napalm 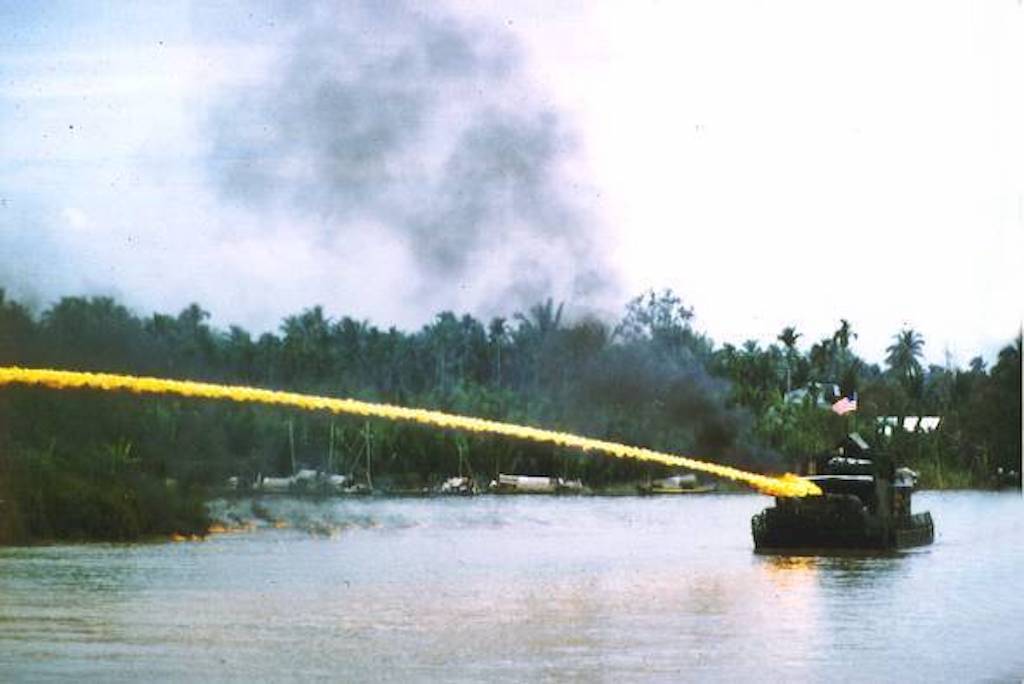 Riverboat of the U.S. Brown-water navy deploying an ignited napalm mixture from a riverboat-mounted flamethrower in Vietnam.

The Vietnam War saw widespread use of napalm, a sticky incendiary agent used heavily against enemies throughout the war. The idea is for the substance to stick where it falls, bringing widespread damage to whatever it may land upon.

However, the idea of such a device has been around long before the 1940s, when the version we think of came to light. Early versions date back to Greek times when it was called “sticky fire.” Allied forces also used petroleum-based gels and gasoline during World War II.

However, as rubber became in short supply, an alternative was needed. (Japanese forces took over all main rubber production areas, including Malaya, Indonesia, Vietnam, and Thailand.)

By the early 1940s, chemists at DuPont and Standard Oil, along with Harvard researchers had developed a number of rubber alternatives that the U.S. could use for tires, tanks, gaskets, hoses, medical supplies, and more. However, their research wasn’t done there. Harvard chemist Louis Fieser led a team that invented napalm as we know it today.

Fieser was contracted by the United States Chemical Warfare Service and his team worked in a secret lab to create the war-bound substance.

In the spring of 1942, they had rolled out a powder that remained dry, but once mixed with gasoline, it became sticky and highly flammable. The team added phosphorus, which increased the length the substance would burn.

They created a substance that:

Napalm also contains naphthenic acid, palmitic acid, and aluminum salts and is named as a portmanteau of its main ingredients.

The first test was done on July 4th of that year, where condemned buildings near the Harvard Business School were hit with napalm. Having been named a success, napalm was then used throughout the remainder of WWII.

A few decades later, a new version of napalm was created, known as napalm B, that was manufactured by Dow Chemical Company for U.S. military forces. Later this became a source of controversy when the deadly and disfiguring results of napalm were made public. Dow was boycotted and potential ires began to avoid the company. The management resided that their “first obligation was to the government,” and remained in production.

The boycotts and subsequent protests turned napalm B into a symbol for the entire Vietnam War for its use against innocent citizens.

In modern times, the use of napalm is not strictly considered a violation of international law. However, it has been banned against civilian use by the United Nations at the Geneva Convention of 1980.

Because countries do not have to adhere to all Geneva guidelines in order to join the UN, many still may approve the use of napalm against their enemies. The United States removed napalm from its own military arsenals in 1995, however, former President Obama signed a General Assembly in 2009 that approved the ability to ignore the Geneva treaty if doing so can save lives.

Rumors state that upgraded napalm versions were dropped in Iraq when initially invading, but have not been confirmed by official sources.