The 5 most brutal tactics in the history of warfare 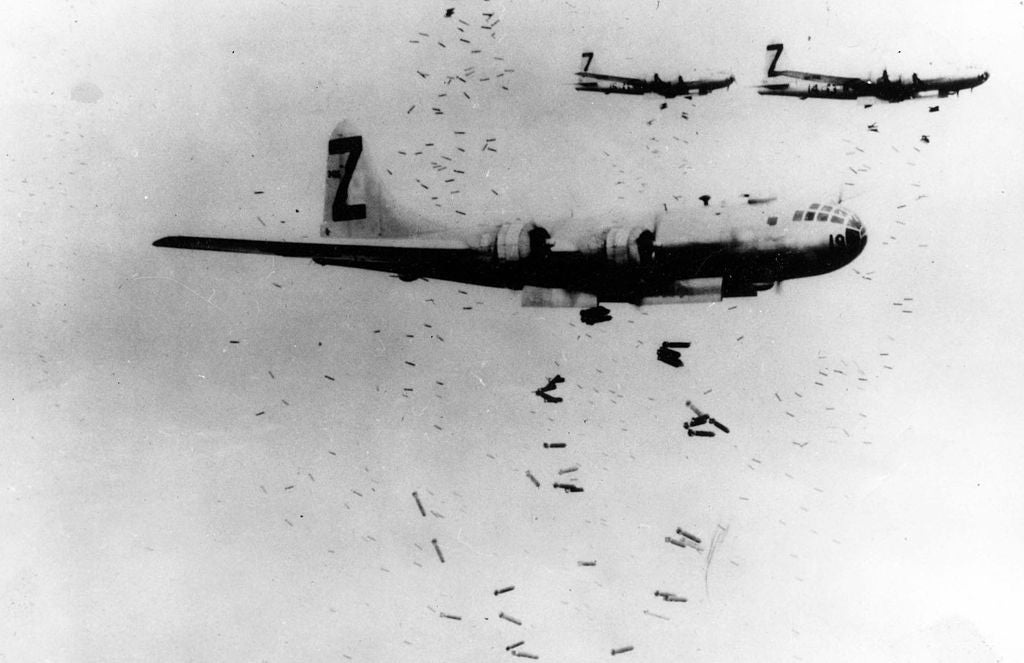 B-29 Superfortress bombers dropping incendiary bombs on Yokohama during May 1945. (U.S. Air Force).

War is, as Gen. William T. Sherman once remarked, hell. It’s also messy, disgusting and brutal. From the time humans first gathered together to go kill some other humans, war rolls through cities and villages, sowing death and destruction everywhere.

Ours is not to judge whether the following tactics were necessary for the success of a war or not, but there’s no doubt they were every bit as harsh and devastating in combat as they may seem. These five tactics give renewed meaning to the concept of “total war.”

When talking about brutal military tactics, it doesn’t get much worse than simple genocide. Mongols would not only crush their enemies’ cities, empires and armies, they would take it out on the entire population. This tactic worked so well, the Mongols are estimated to have killed 11% of the world’s population. Just hearing about the approach of a Mongol horde was enough to spark panic almost anywhere.

So when the Mongols demanded the surrender of a city, lest the entire population be killed, people took them seriously and many places did actually just surrender. This made the Mongol armies more efficient conquerors and allowed them to move troops to where they were needed the most and foreign troops who joined them brought more advanced technology, which allowed for more rapid expansion.

2. The Firebombing of Japan

The Pacific Theater of World War II was one of the most brutal and destructive wars ever seen by mankind. The Imperial Japanese Army and Navy was relentless and known to fight to the last man or die trying to win – or commit suicide for their failure. Knowing this, American scientists and military planners knew they had to devastate Japan before it would submit. While the atomic bomb was still a secret, the U.S. military hatched a plan to take down Japan’s wooden cities.

Harvard and the U.S. Army developed a new accelerant for use in bombing missions, napalm. Essentially jellied gasoline, the substance would allow explosives to spread fire throughout a wooden city quickly and more efficiently. When the bombs were finally dropped on Tokyo in 1945, the resulting fire destroyed half the city and killed 100,000 civilians in a night. Subsequent  bombings across Japan were just as devastating.

The Roman Empire fought a lot of enemies over the course of its thousand-year-plus lifetime. Much of its martial success was due to the legendary Roman legionnaires, whose distinctive look has echoed through the subsequent centuries. Rome’s standard foot soldier wore segmented lorica armor, carried a distinctive scuta or shield, and wore open-toed sandals, called caligae, into combat. They fought in close formations called cohorts when fighting in close battle and, to push the enemy back, would advance as an entire formation.

Unfortunately for Rome’s enemies who fell in front of a cohort and didn’t die, the Roman army sandal was cobbled with nails for traction, but also to maul the wounded as the Legions advanced. This means that falling to a cohort and not being killed outright doomed an enemy of Rome to being trampled to death by hundreds of nailed feet, slowly and deliberately.

As if the well-founded terror set in by word of an oncoming Mongol horde wasn’t enough to spark terror and start a footrace to get as far away as possible, a terrible fate potentially awaited those who stayed. An even more terrible fate came to those who resisted. And an even worse fate than that came to those who survived a battle against the Mongols. A prisoner of war, were they not an artisan or engineer, could expect to be a thing.

This means the Mongols would use their body as something to help them win the next battle. Farmers, nobles, priests, you name it, they would either soon be used as a human shield, part of a pile of bodies that might form a ladder, or a projectile weapon themselves, if they were diseased or decomposed enough.

As is the trenches of World War I on the western Front weren’t already a terrible hellscape with live decomposing bodies, rats eating the dead, and random artillery explosions shattering what tree cover was left and raining shards of wood down on the troops, the German Empire began add a little something extra: Gas. PTSD wasn’t discovered on the western front, but it was probably perfected there.

Chlorine gas turned water in the airway to hydrochloric acid, mustard gas blistered the lungs, throat and disfigured thousands, while phosgene killed silently and sometimes hours or days later. Gas was much more effective as a psychological weapon than a killing machine, but it did both those jobs equally well when the time came.