Why Ukrainian drones are so effective against Russian troops 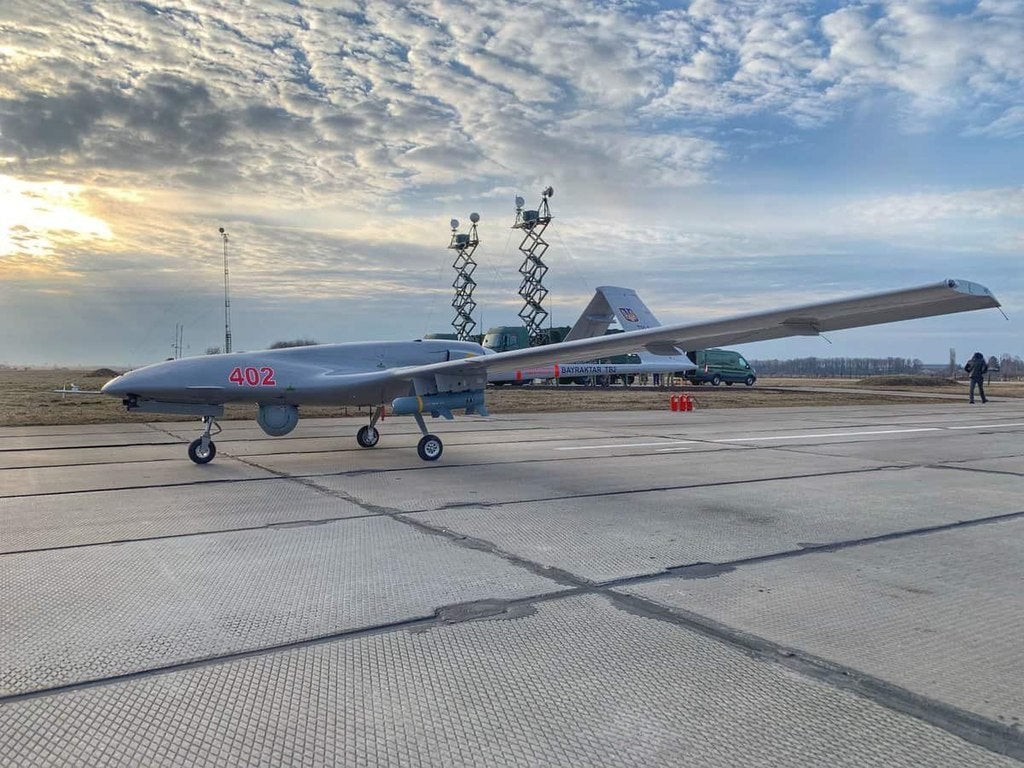 A Bayraktar TB2 of the Ukrainian Air Force armed with MAM-L; two ground control stations are in the background.

When watching the news coverage about the ongoing Russian war in Ukraine, we hear mention of the effectiveness of Ukrainian drones and the death they’re raining on Russian troops. When Americans think of drone strikes, they likely think of unmanned aerial vehicles like MQ-9 Reaper or they think about hand-controlled propeller drones, like the kind anyone can buy on Amazon.

The Ukrainian Bayraktar TB-2 drone is unlike either of those, but they are hugely effective against Russian soldiers and are hard for Russian aircraft to take out – and the reason why is simple: size.

TB-2 drones aren’t very big as far as armed UAVs go. They are much, much bigger than consumer drones that can be bought in stores and controlled on a smartphone, however. They’re about the size of a large American-built SUV.

One of the biggest draws of the Ukrainian TB-2 is that it can fly really high, making it difficult for Russian radar to pick up. The higher it is, the smaller its radar return will be and when mixed among the clouds and other natural occurrences, the TB-2 can be very hard to detect. Since it’s also really small anyway and Russian radar operators are probably more concerned about fighter aircraft, a TB-2 can easily go unnoticed.

The size of the Bayraktar is also an advantage against advanced radar like those equipped on Russian surface-to-air missile batteries. They can effectively be filtered out by those batteries and the radar aboard advanced Russian fighter jets that filter out smaller, slower-moving targets.

To top all of that off, the Russians aren’t able to jam transmissions sent by the Ukrainian TB-2 for the same reason: they don’t know the drone is relaying combat information because they don’t know when one is even in the area.

Simply put, the weapons necessary to shoot down such a target like the Bayraktar are unable to see them and thus can’t put them in their proverbial crosshairs. Although Russia has claimed to have shot down 37 of them (despite Ukraine only having 35), the Bayraktars are still causing untold havoc on Russian troop formations.

For those that do get shot down, they are relatively cheap and easily replaced. Turkey, a NATO ally, is not able to officially supply the drones for Ukraine’s defense, because it needs Russian energy. Ukraine acquired them through a private sale. But Ukraine isn’t currently running out of TB-2 drones, it’s running out of ammunition for the drones.

Since they can’t be easily detected, they can swoop in and take Russian infantry units by surprise with a variety of weapons. They carry Turkish-built laser-guided missiles, long-range antitank missiles, laser-guided mortars, and KUZGUN modular, multi-warhead munitions that can destroy tanks, boats, armored vehicles and even caves.

The Bayraktar TB-2 isn’t just used to great effect in Ukraine. The side flying the Bayraktar has succeeded or is currently winning conflicts in Nagorno-Karabakh, Syria, and Ethiopia’s Tigray region. In Ukraine, they aren’t just being used as weapons, either.

In what might be a reflection of the country’s need for ammunition, Bayraktars are being used as artillery observers, being called to locate targets and send back targeting information. As anyone who served in the military knows, the most dangerous weapon on the battlefield isn’t necessarily the enemy soldier with the rifle – it’s really the enemy soldier with the radio.