Army announces historic, ‘temporary promotion policy’ for soldiers - We Are The Mighty 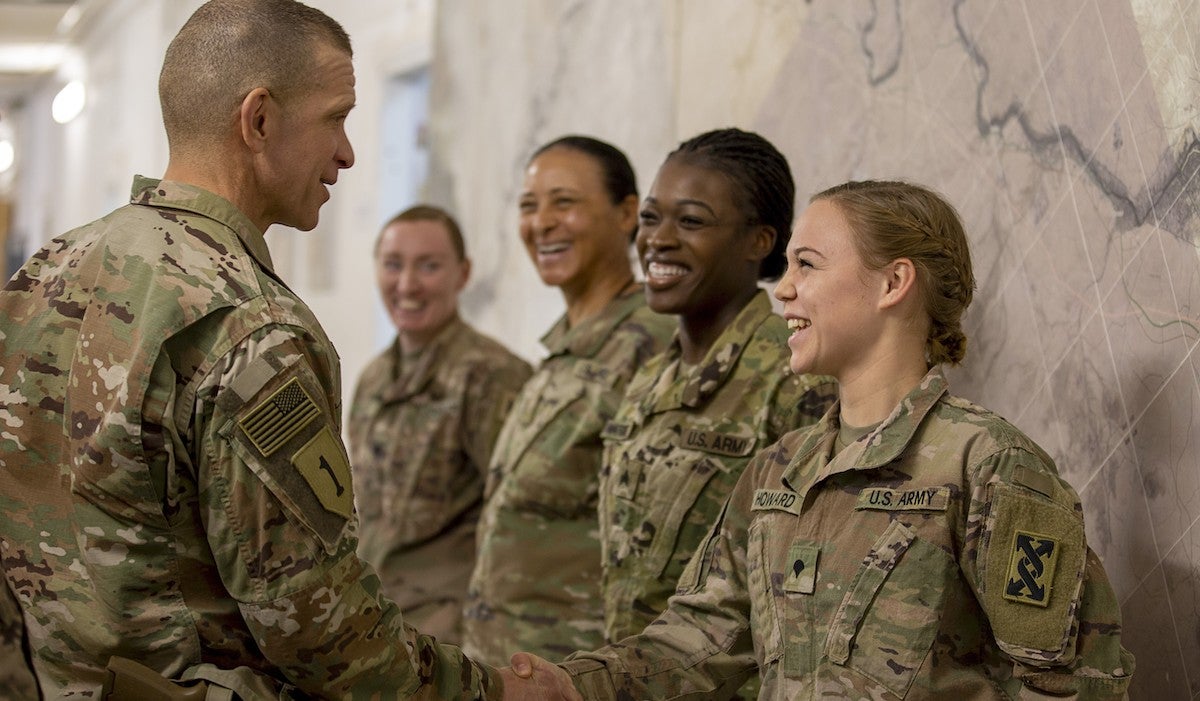 Sergeant Major of the Army Michael Grinston announced a historic new temporary promotion policy for soldiers. The policy is designed to expand on the Army’s ongoing commitment to supporting its soldiers.

“Today I am pleased to announce a new promotion policy that helps us to continue to put people first,” Grinston shared on a press call. Beginning with the January 2021 promotion month, soldiers unable to complete the Army’s required Professional Military Education courses to qualify for advancement to sergeant, all the way through sergeant major, due to pregnancy, deployment or those enrolled in a non-resident sergeant major course will be temporarily advanced to the next rank.

Through research, the Army recognizes that the requirements for advancement to higher rank negatively impacts women in particular. Grinston shared that female soldiers would routinely speak to him about the struggle and difficulty of determining when to start a family in order to not negatively impact their career. Female soldiers are unable to complete the physical training portion of leadership school required due to pregnancy or being postpartum, often putting them behind their male counterparts in career advancement.

Deployed soldiers were also falling behind their peers in advancement opportunities. Grinston explained that Army units overseas were declining to send soldiers to the required PME courses due to operational needs within combat zones. Around 300 soldiers requested exceptions in 2019 in order to advance to the next rank. Although the number may seem small, Grinston shared that it would be much higher if the Army ever had to significantly increase their numbers to meet combat needs.

When developing the policy, leadership wanted to ensure that those attending either sergeant major course could advance on time, regardless of how they took it. It was discovered that those attending the nonresident sergeant major course tended to finish their course later, missing the deadline for meeting requirements for promotion on time. This left qualified soldiers waiting a year to advance to the next rank despite completing the required schooling. The new policy avoids that.

Command Sergeant Major Kenyatta Gaskins was also on the call with members of the press and addressed questions on whether soldiers being temporarily promoted were actually ready to advance. “Those soldiers have already demonstrated that they have the potential to perform at the next higher level. They have been recommended for promotion by their commanders,” he explained. “I don’t believe we are blindly promoting individuals. These are well deserved promotions of soldiers who’ve demonstrated the ability to perform at the next higher level.”

The temporary promotion policy applies not only to active duty Army but also those in the Army Reserves and Army National Guard. As long as soldiers are otherwise qualified and meet the conditions outlined, they will be advanced beginning January 1, 2020.

Those temporarily advanced to the next rank will have a set amount of time to complete their PME courses or they will revert back to their previous rank. Should they be reverted back due to not completing PME, they will not be required to pay back the received increase in pay due to temporary advancement. Active soldiers returning from deployment will have one year to complete their PME course and active female soldiers will have two years from the end of their postpartum profile. Those in the Army Reserves or Army National Guard will have three years.

The temporary promotion is allowable only once in a soldier’s career.

“I believe none of these scenarios – starting a family, deploying to a combat zone or selection to the nonresident sergeant major course should be a reason a soldier’s career should be delayed,” Grinston explained. “These temporary promotions support the Army’s ‘people first’ strategy.”