At the Navajo Nation, an injection of hope - We Are The Mighty

At the Navajo Nation, an injection of hope 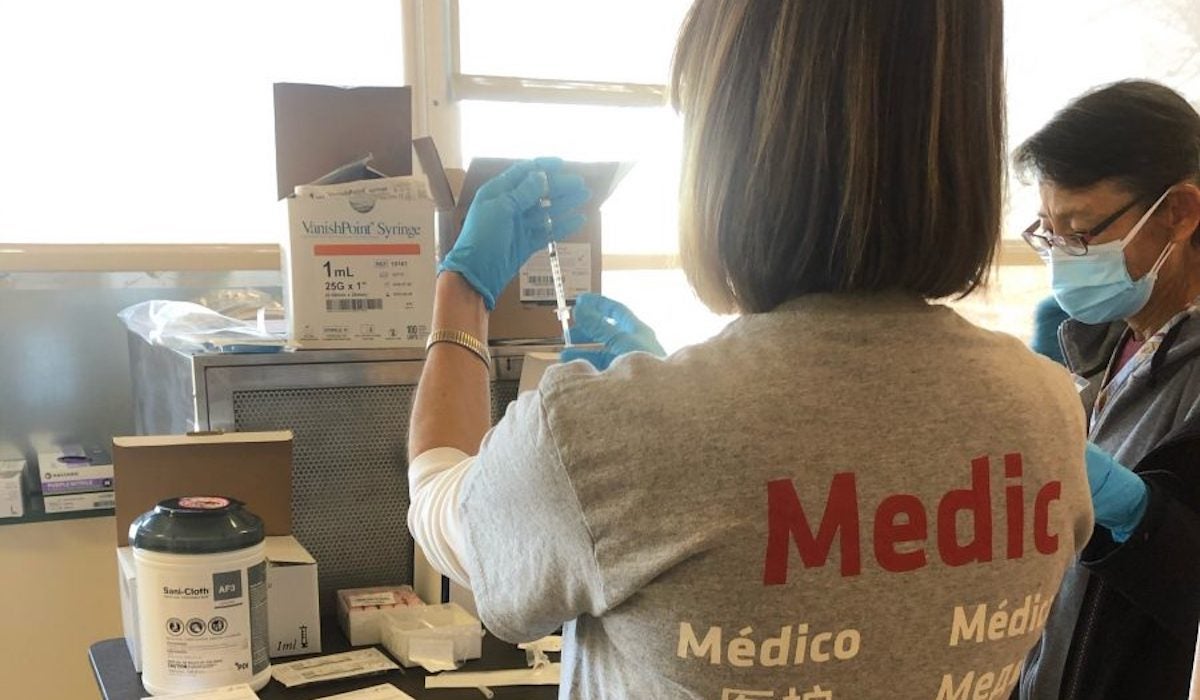 One month ago, RN Terri Whitson was mucking out hurricane-damaged houses in Lake Charles, LA. On Tuesday, she was at the Navajo Nation vaccinating frontline workers against COVID-19.

Making that vaccine delivery was very emotional for Whitson, who retired from the Navy in 2016 and has spent much of the past year volunteering on feeding operations and assisting with hurricane relief with Team Rubicon.

Whitson, who served in the Navy Nurse Corps, deployed as a volunteer nurse with Team Rubicon at the Gallup Indian Medical Center on December 6 having no idea she’d be there when the vaccine arrived. When she heard it was coming she asked to extend her deployment by another week so that she could help get the vaccine into the arms of people who need it most.

“I feel pretty fortunate to have been involved in this, and to be involved in something that I think is so huge—so huge that it could possibly bring everybody’s lives back to normal again and provide protection for these frontline workers in the hospitals who are just so overwhelmed,” Whitson says, before stopping to dry some tears. She gets a little emotional thinking about the losses Americans, and medical workers, have experienced over the past nine months.

Before the vaccine arrived at the Navajo Nation, Whitson had spent weekdays at the Medical Center working with employee health services, where she would talk with people about their test results—hard, emotional work in itself given the number of positives and knowing how short-staffed the system already was. On the weekends, when health services was closed, she swabbed noses at the drive-through coronavirus testing site, which is open to the public.

When the vaccine arrived at the Navajo Nation at 10 a.m. on Monday, Whitson was on the team that began setting up a vaccination space. It’s a place, Whitson says, that people might receive a bit of hope. On Tuesday, she delivered her first COVID-19 vaccination there.

For now, IHS and the team are focusing on vaccinating those frontline workers who have the most exposure to COVID-19 patients, such as people working in the emergency department, anesthesiologists, and hospitalists. The hospital, which has more than 1,300 employees, has received 640 doses of the vaccine.

By the end of the day Tuesday, the team had vaccinated 80 of their fellow doctors and nurses; on Wednesday, they expect to vaccinate another 95 more.

“You can feel an excitement, and people were joking and laughing,” says Whitson of her time administering the first shots. Everyone also wanted to either have a picture taken or be videotaped making history. “It was joyous. It was such a good feeling.”

That joy was a lift for Whitson, too. She’d spent the prior week hearing codes called in the hospital and hearing ambulances come and go, and knowing for herself just how devastating the pandemic has been in this community.

“It was a good day. It was a really good day, and it felt really good to give people … to hear them say, ‘you know, this is the beginning of the end’,” Whitson says, stopping to clear her throat. “You know, we were giving them an injection of hope.”