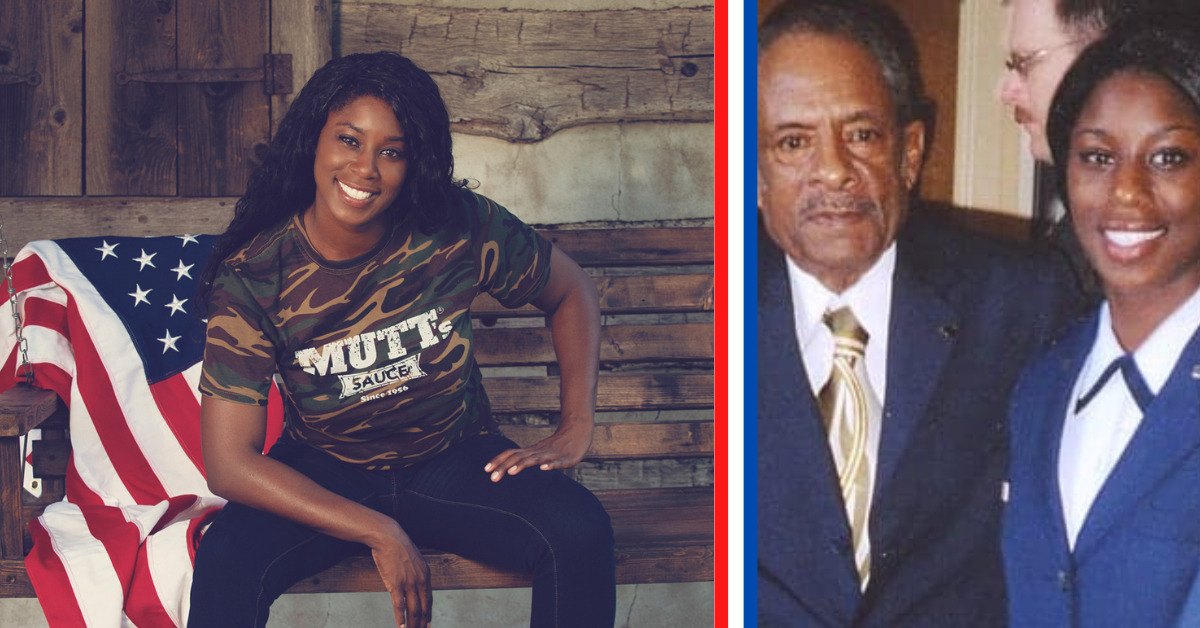 When retired Air Force veteran Charlie “Mutt” Ferrell left his granddaughter, Charlynda Scales, the recipe for his famous put-it-on-everything secret sauce, it wasn’t just a piece of paper or a memory for her to reflect on. Mutt’s Sauce would turn into a legacy of service.

“I grew up in Cookeville, Tennessee and was just a country girl. For most of my life I lived with my grandparents. So much of my childhood was spent listening to their stories of living all over the world and being an Air Force family,” Scales explained. “It was exciting to me and I was like, someday, I’m gonna do that too. I knew it came with its challenges. My granddad was in Korea and Vietnam as an aircraft technician. He saw a lot and there weren’t programs back then like we have now.”

A Legacy of Service

Her mother insisted on a big focus on education but Scales said she identified most with the jocks, loving sports. An injury would change her dream of a sports scholarship. “I had a very humble beginning. My mom was a single mom and it took her 10 years to get her college degree,” she shared.

After watching a fellow classmate filling out an ROTC application, she decided to apply herself. Towards the end of the year, Scales found out she got a full-ride to Clemson University and would commission into the Air Force after graduation.

“When I told my grandfather that I was going to the Air Force, the look on his face, I will never forget. He was trying to hold back tears and was so happy that I was choosing to go into service to carry on this family legacy he was so proud of,” Scales said. “We learned at that point that he had been diagnosed with stage four lung cancer and it was rapidly spreading throughout his body.”

But Mutt held on. Though too ill to make it to her college graduation, he was able to rally for her commissioning ceremony the next day. Scales was the first officer in the family and her grandfather was able to give her the silver dollar salute.

“I tell people, everything that has happened after that point is just icing on the cake, because the best thing has already happened for me in that I got that moment. He passed away less than a year after,” she shared.

Eight years into her active-duty career, Scales found herself at Wright Patterson Base eating something with less than stellar sauce. “It sucked and made me start missing my grandfather’s sauce,” she laughed.

Back in 1956, “Mutt” had the idea to craft a sauce that could be used on everything. While stationed in Okinawa with his family he’d often host parties and his sauce was always the highlight. “It was a way of breaking bread with people that bypassed any kind of barriers,” Scales added.

After the less than impressive meal on base, she called her mother to get her grandfather’s sauce recipe. “My mother said I had to come see her which was really weird because she’s not normally a cryptic person. So the next time I went to visit her she handed me the envelope my grandfather had given to her in his hospital bed,” she explained. “But everything I know about this man, this feels like it’s much more than handing me a piece of paper, there’s a lot of conversation, probably a lot of instruction that’s wrapped up in this gesture. My mom said he left no instruction. I just needed to figure out if I was going to shelve it and put it in a cupboard like most people do or if I was going to do something with it.”

She did something and Mutt’s Sauce was born.

With the goal of creating not just a family business but stability and the opportunity for multi-generational wealth, she was all in. From research, mentoring to actual product took less than a year and in 2015, Scales made the decision to transition into the Air Force reserve.

Just two years later she was on Shark Tank and receiving financial support to scale the business. Mutt’s Sauce went from producing 700 bottles per day to 8,000 and it was soon on the shelves of Kroger stores across the country. The business has now won numerous awards and further along than Scales ever dreamed.

In 2020 she welcomed her first son, David, who she says is her legacy.

“I still struggle with impostor syndrome,” she admitted. Her advice to others seeking to start their own businesses was direct. “You’re qualified just by breathing and being in the room and sometimes just by choosing to take on the impossible. Do the thing that’s scary.”