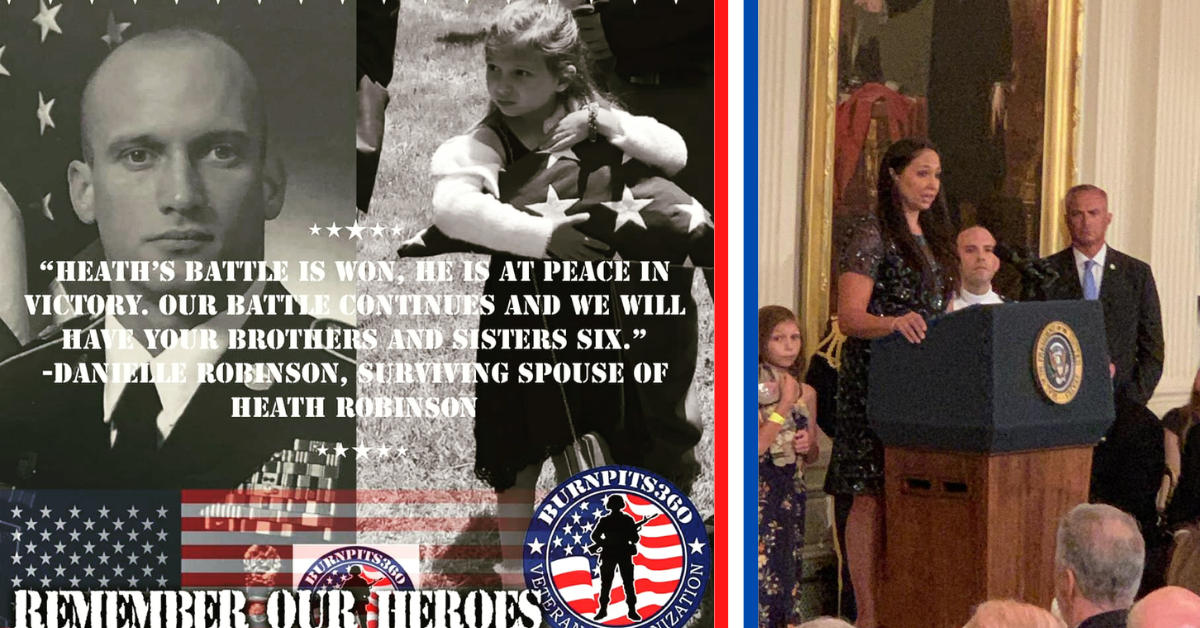 When Danielle Robinson began her relationship with her husband through hand-written letters during his Iraq deployment, she had big dreams. Becoming a fierce advocate for him and other veterans wasn’t even a thought.

“I grew up in Sandusky, Ohio, a small city on Lake Erie in northern Ohio, between Cleveland and Toledo. We’re known for one of the best amusement parks in the world, Cedar Point. I grew up with a very active childhood and was also a decorated gymnast for many years,” Danielle shared. “I began getting injured from gymnastics and started physical therapy. That’s where I kind of fell into a love for working with people.”

She attended Ohio State University with an undergrad in Exercise Therapy and was pre-physical therapy. Robinson earned her clinical doctorate in Physical Therapy at Youngstown State University.

But during her undergrad college days, she was introduced to Heath.

“He actually asked me on a date the weekend before he left for a deployment to Iraq. That’s how we began our journey that first year when he was in Iraq, we just chatted more and got to know each other. When he arrived home was when we really started dating,” she explained.

Heath was part of the Ohio Army National Guard. Robinson was surprised at how close she became to the members of his unit and their families. “I wouldn’t have expected it to be so family oriented. But everybody that deployed lived close and we’ve been best friends since 2006,” she said.

After three years of long distance dating, they got serious. They were married and had a daughter a few years later. Heath was the 2012 and 2013 Ohio National Guard NCO Soldier of the Year. He was healthy, fit and even finished a half-marathon in early 2016.

A few months later, he started feeling tired. Chronic nose and ear bleeding began not long after, followed by losing his voice completely. Though initially diagnosed with a rare autoimmune disorder that strikes the elderly, a biopsy on a lymph node would lead to devastating news.

“What the hell have you been exposed to?”

The tear filled words of the oncologist were followed with the diagnosis of an extremely rare form of stage 4 adenocarcinoma lung cancer which is caused by prolonged exposure to toxic substances.

Heath was on Camp Liberty and worked some of his 13-month deployment to Iraq on Camp Victory. Both bases were known to have huge burn pits. During his time at Camp Victory Heath had guard duty at the burn pits every day and for three months, he was breathing it all in.

His diagnosis would start a three-year journey of surgeries, treatments, hospitalizations and constant supervision because Heath was contimplating suicide.

Though Danielle was encouraged to apply for the VA Caregiver Program, they were denied. Heath’s lung cancer was 100% service connected but the VA said it wasn’t “proven” that the burn pits he was exposed to were the cause. Doctor after doctor who saw him continued to say the same thing – toxic chemical exposure is the only thing which could have caused this cancer. In the last months of his life after three years of fighting, he struggled to breathe and was in excruciating pain.

“I never thought I would be on Capitol Hill. Politics was always something I stayed away from,” Danielle said.  But making sure other veterans didn’t experience what Heath went through made it a necessity, in her mind. “I have treated a lot of Agent Orange veterans and seen everything they’ve gone through. I would have never known that my husband was going to be going through similar things that I was experiencing and seeing from them in the clinics. It was a complete blindside.”

It would begin her journey to getting the Sergeant First Class (SFC) Heath Robinson Honoring Our Promise to Address Comprehensive Toxics (PACT) Act signed into law on August 10, 2022. The fiercely fought for legislation expands the eligibility of more than 3.5 million veterans exposed to toxic chemicals to receive benefits.

The day of the bill signing was an emotional one for Danielle. “During Heath’s illness I felt so alone. I started finding more and more widows and other people who are similar to us and our story,” she said. “Just hearing story after story and the gut wrenching symptoms, denials, battles that each family had to go through, it just weighed on me. Over time it actually was my fuel for the fire to want to go to Washington and make a difference.”

Through the support of numerous VSO’s and the microphone of people like Jon Stewart, the voices for this act became loud enough for Congress and the American people to pay attention.

“We understand that when people go into the military that the risks of dying due to a combat related injury is fairly high during deployment,” Danielle explained. “With everything that’s gone on with the toxic exposures and finding out more and more of how the government knowingly allowed toxic exposures to happen, I would like the public to know that no matter what – our military needs to be taken care of because obviously they haven’t been for so long. We’ve seen it generation after generation. I’d like them to realize that just saying thank you on the street really isn’t enough.”

Heath often talked about wanting things to change and made Danielle promise she’d keep fighting until it did. Though he couldn’t make it to signing day, she knows he was watching.

​​”It was his dying wish. He knew it was too late for him. I think he knew my mom and I would continue to see this through until the end and we promised him we would,” Danielle said through tears. “He just wanted to know his brothers and sisters were going to be taken care of in ways that many of them were not.”

To learn more about the PACT Act, click here.