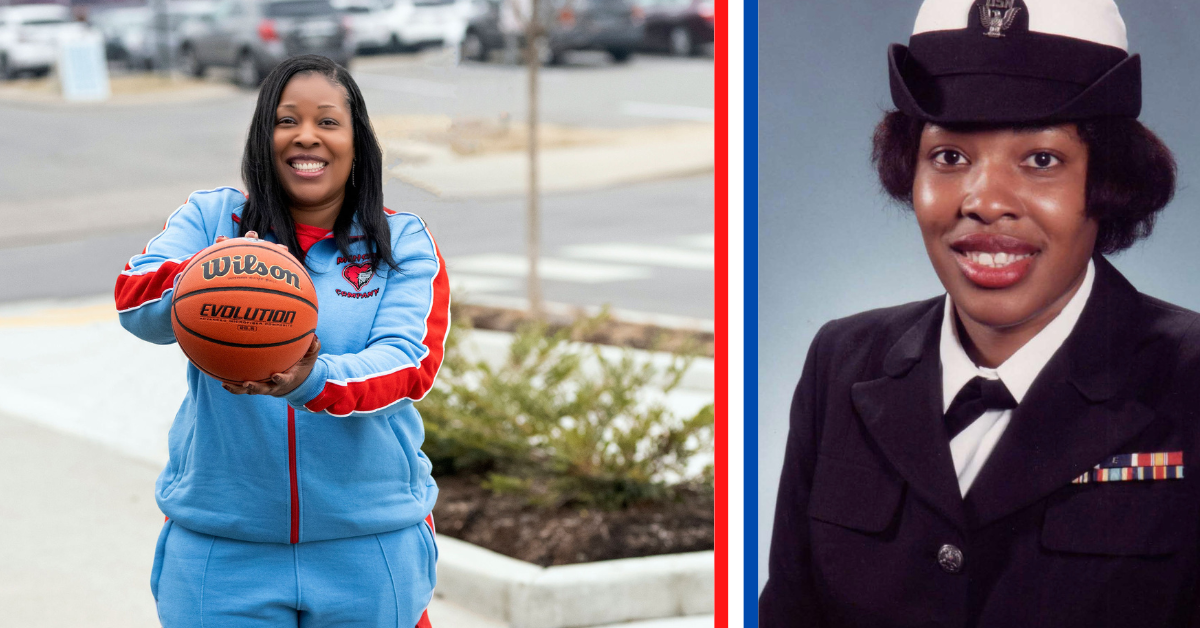 When Renee Bobb enlisted, it was to play basketball professionally because the WNBA hadn’t been established yet. Desert Storm would shift the true reality of being a sailor in the Navy and lead her into an extraordinary career serving others.

“I felt like joining the military will be a great way for me to continue my basketball career, honestly. I signed up for the United States Navy, becoming a telecommunications operator,” Bobb shared.” “I did get a chance to play NATO basketball for the Navy. Then Desert Storm happened and it was like, you gotta put your sneakers up.”

Even though it wasn’t what she thought she signed up for, Bobb loved her time in the Navy.

“It was truly an honor to have the opportunity to kind of serve my country. During Desert Storm, the ship that I was on, we actually supplied fuel and mail and resources to those that were actually on the frontline. It took everything full circle,” she added. “My first priority was playing basketball when I got into the military but it was so much bigger than playing basketball, it was having the opportunity to serve next to my fellow sailors.”

After transitioning after over five years in the Navy, she settled in Virginia Beach and launched a career consulting firm for veterans.

“After working with military veterans and their spouses to make a holistic transition, more and more kept telling me they didn’t really believe in the job market being right for them,” Bobb explained.” “I began to go to the public library to look things up because I wanted to learn everything I could about entrepreneurship. Then I actually made the transition to start helping people to start their own businesses.”

This approach led to contracts with the Small Business Administration and Small Business Development Center. Over 20 years later – she was widely recognized for her work and award-winning training modules. In 2017, she purchased Music City Icons, a semi-professional women’s basketball team.

“One day I was at Pathway Women’s Business Center teaching entrepreneurial classes in Nashville when this woman walked in. She’s like 6’1” and obviously is a basketball player. We ended up having this amazing conversation,” Bobb explained. The woman suggested she look into purchasing a dissolving women’s basketball team. “I ended up acquiring a team.”

Not only has she forged opportunities for her players to play overseas and with the WNBA, but she works closely with them on financial management, allowing them to have a true plan after basketball.

So, what inspires Bobb to pursue life as enthusiastically as she has? Her mother. After her parents divorced, she watched her mother sacrifice everything to ensure others were taken care of first. “She was always right there by my side. But she also was in social work as I was growing up,” she shared.

There were times her clients didn’t receive their food stamps and Bobb would watch her mother take money out of her own pocket to help them. “I always said I would never do that,” she laughed.

In 2017 she joined Bunker Labs as its National Director of Training and Development.

“I started the first ever black entrepreneur workshop series for military veterans, military spouses and the military connected community. It’s an eight week program where I bring in all these amazing speakers to speak to the issues and challenges that the participants were dealing with when it comes to access to capital, creating an environment where they feel safe to talk about some of the issues that they’re dealing with, as black entrepreneurs,” Robb shared. “The program has done so well they expanded the program to include Asian American, LatinX and female oriented training. To date, we have a little over 320 participants that have gone through the program.”

Those who go through her program also receive support seeking grants for their ideas and companies. Around $1.5 million has been awarded to the veterans she’s worked with.

Her words of wisdom for others seeking to fulfill their business dreams were direct. “Sometimes life puts you in situations where you have to stand up and you have to do all that you can do,” Bobb shared. “Sometimes people believe more in you than you actually believe in yourself. Once you get that belief in yourself then you’ve got to run with it, step up and be the leader that you’ve been designed to be.”