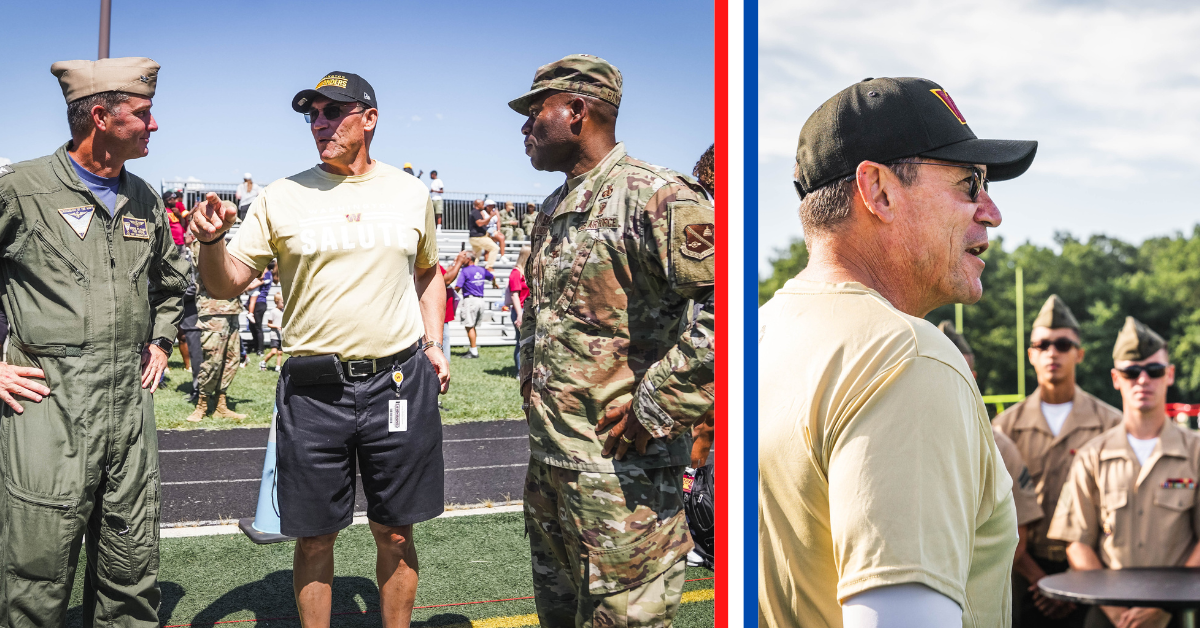 Long before Ronald “Ron” Rivera would play in and win a Super Bowl or become NFL Coach of the Year, he was an Army brat. It led to a life dedicated to hard work, pursuing dreams and giving back to the military community.

Born on the now-closed Fort Ord Army Base in California, it became home for the Rivera family. They spent a couple years in Germany before their dad was sent to support the Vietnam War.

The Life of a Military Kid

“When he came back, we got sent to Fort Gulick, Panama, on the north tip of the Canal Zone, on the Atlantic Ocean. I was the perfect age, I was a preteen to my early teen years and I spent them there. It’s an amazing place and full of adventure,” Rivera shared.

In a family of four boys, his brothers became his best friends. “We were very close because of the life we led but I think it also allowed us to make friends easily,” Rivera said. “When they talk about it takes a village to raise a kid I’ve always said it took an army base for me.”

It was during these years his football skills began to shine. When the family was re-stationed at Fort Ord, his playing in high school led to a recruitment by 28 schools before committing to the University of California, Berkeley. Recognized as an All-Star linebacker, Rivera graduated and went to the 1984 draft where he was chosen by the Chicago Bears in the second round.

They won the Super Bowl a year later.

“I think it’s a direct correlation between growing up in the military and me being who I am today. Mostly because you know, there’s so many disciplines you learn. Responsibility, discipline and you learn about chain of command. Duty, honor, I mean, those are all words but you see those words in action every day,” he explained.

These are the values he’s not only poured into his life but into his players, as well.

His coaching career led him from the Bears to the Philadelphia Eagles, San Diego Chargers and eventually to the North Carolina Panthers as the team’s head coach. It was here he’d lead the team to their record of all-time wins. Rivera was recognized as the NFL Coach of the Year in 2013 and 2015, eventually leading the Panthers to Super Bowl 50.

Beyond investing in his teams, giving back to the military community is personal for Rivera.

Standing Up for Those Who Serve

Throughout his time playing and in coaching, Rivera and his wife have committed to a number of causes which support the military. While coaching the Panthers, he spent a lot of time supporting TAPS and the USO of North Carolina. An event at an airport left its mark.

“It caught me for a second when I saw a family of a mom, a soldier, their four children, because that was us. And it really did choke me up,” Rivera shared. “We were at the airports. We were getting ready to go somewhere. I can see it clear as day in my mind’s eye right now. There we were dressed in our Sunday best. Dad was in his uniform and mom was trying to keep us in order. So that’s why I get involved. That’s why I give back.”

In 2020, he became the head coach for the Washington Commanders. “This was about change and changing the culture. I want to develop a sustainable winning culture and it starts by doing what I have to do now in order to impact the future,” Rivera said.

When he reflects back on his life – it’s hard to see anything but good.

“I really do feel very fortunate, very blessed. My parents are still alive, my dad’s 86 and mom’s 82. Every time I get a chance to come and visit, I do. They still live next door to Fort Ord California,” Rivera laughed. “it’s kind of neat to sit there and listen to my parents and my brothers and I talk about growing up in the military. We always talk about the impact it’s made on all of our lives.”

Rivera’s advice to the military community was simple. “It’s something I say to my players all the time and is one of my favorite sayings,” he shared. “Be where your feet are. Wherever you are, whatever you’re doing – be there 100% of the time.”

To learn more about this amazing coach and human, click here.