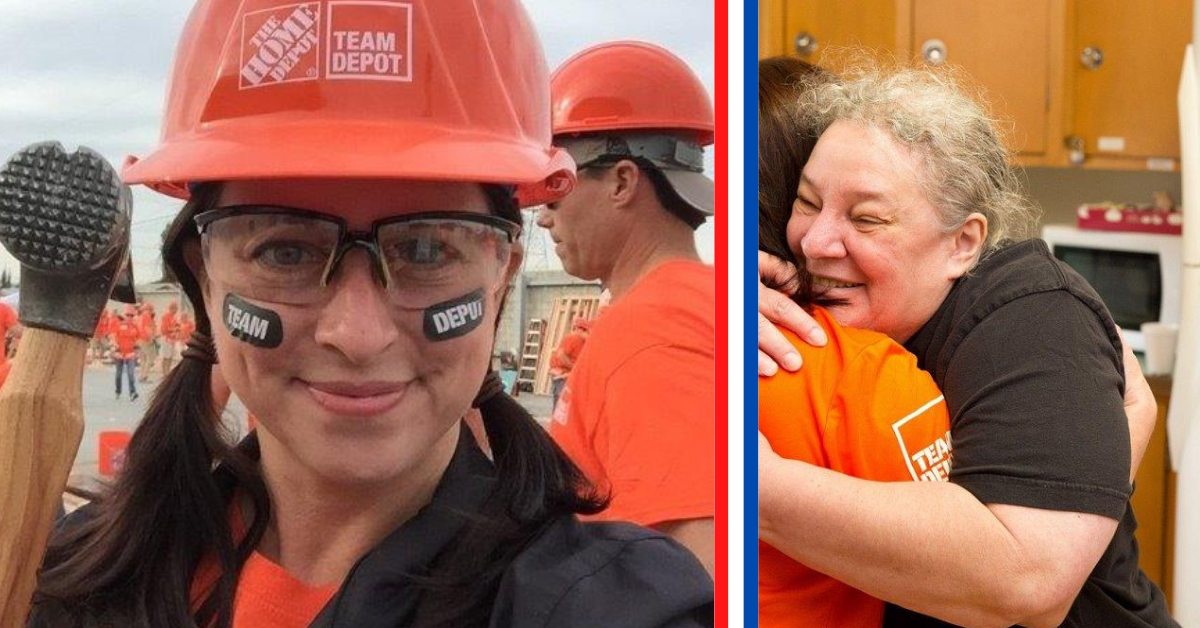 Over 35,000 employees at Home Depot are veterans and since 2011, the foundation has given away over $400 million to military-related causes. As the Senior Manager of National Partnerships for the nonprofit arm, Heather Prill wants to do even more.

Back to the Beginning

Though she didn’t grow up with a family background in the military, service was present everywhere. “One grandmother was a nurse and another was captain with the Salvation Army. Both were just very strong women and very big believers in servant leadership.,” she explained.

Prill’s parents were both professors and her dad retired as a minister. “I grew up where you give back to others. And that has just been part of my DNA since day one,” she added.

After college her career focus was always governmental affairs and working in the nonprofit world. When she came to the Home Depot Foundation, Prill said she had a  lot to learn.

“I was learning everything I could about the military and veteran space and just where Home Depot could serve and where I personally could serve. I have been very fortunate to have some great mentors and people who have brought me in along the way. I will say the military and veteran community is definitely a very open community and willing to teach you anything and everything,” she shared. “When I came into the foundation, we said that we were going to invest $30 million into ending veteran homelessness over the next three years and we invested that money pretty quickly. Fast forward to today and we’ve made a commitment to invest half a billion dollars into the veteran community by 2025.”

The three focus areas for the organization are housing for veterans (veteran homelessness, combat-wounded and America’s aging veterans), skilled trades training and disaster response. All of the work they do is in partnership with nonprofit organizations. They work to do more than act as donors but also work on capacity building and programmatic growth of partners. For example, Purple Heart Homes and Team Rubicon were small when the foundation started working with them, now they are large organizations that arewidely recognized as leaders in the space.

“It’s incredible to see the number of people that we’ve been able to serve through Team Rubicon and Purple Heart Homes and our other nonprofit partners. Just thousands and thousands of veterans who we’ve been able to touch. It’s so meaningful personally for me,” Prill explained.

For her, it’s difficult to pinpoint what she’s most proud of. But it’s easy to remember the stories that impacted and changed her life.

“I have a picture up on my wall of myself with one of our veterans, Malcolm Harvey. Malcolm served in the Navy for 12 years and then when he got out of the Navy, for various reasons, became homeless and lived in LA’s skid row. It took him forever to trust one of our nonprofit partners and to go in for help. Our veteran partner, U.S. Vets,was finally able to get him to come in and talk to them and trust them,” Prill shared. “From day one, Malcolm went in and completely changed his life around. We fast forward to today Malcolm has his master’s degree, is married, he has moved out of permanent supportive housing with his wife into their own housing and now works with U.S. Vets to get other veterans off the street and into housing.”

It was hard for her not to get emotional discussing the story and highlighting the why behind her work. The foundation is tackling all of the issues veterans face in a variety of different ways. To prevent stories like Malcom’s, they start before the veteran hangs up the uniform for good through the Path to Pro skilled trades program.

“That military piece for me is just so key because I’ve talked to so many service members who are going through our skilled trades program. But to hear their concern and anxiety about what’s going to do once they exit the military and then to be able to provide them not just with this certification but also help them get them placed in careers. To take some of that anxiety off of them has been very eye opening for me but also very fulfilling and definitely gives me my why,” Prill said.

The Home Depot Foundation’s Path to Pro program has assisted 2,550 veterans to date on 10 different military bases with pre-apprenticeship certifications. You can also find this program providing hands-on education in more than 250schools country-wide.

“As we started getting into the skilled trades we realized we’re giving people a career opportunity and helping prevent homelessness at the same time. It’s really incredible to see it all full-circle,” she said. “Home Depot was founded on eight core values and two of those are giving back and doing the right thing. It’s just amazing to me because when I look at this company, again, I come from nonprofit and government, this was my first foray into the corporate world and to come into a company that is so giving and so focused on giving back has been incredible.”

As she looks towards the future of giving back and serving those who’ve served our nation, Prill has high hopes for what’s to come. “It really is an honor for us to be able to be in this space,” she shared. “The Home Depot Foundation, we truly love the work that we do and are proud of our commitment to serve veterans.”

To learn more about The Home Depot Foundation, click here.