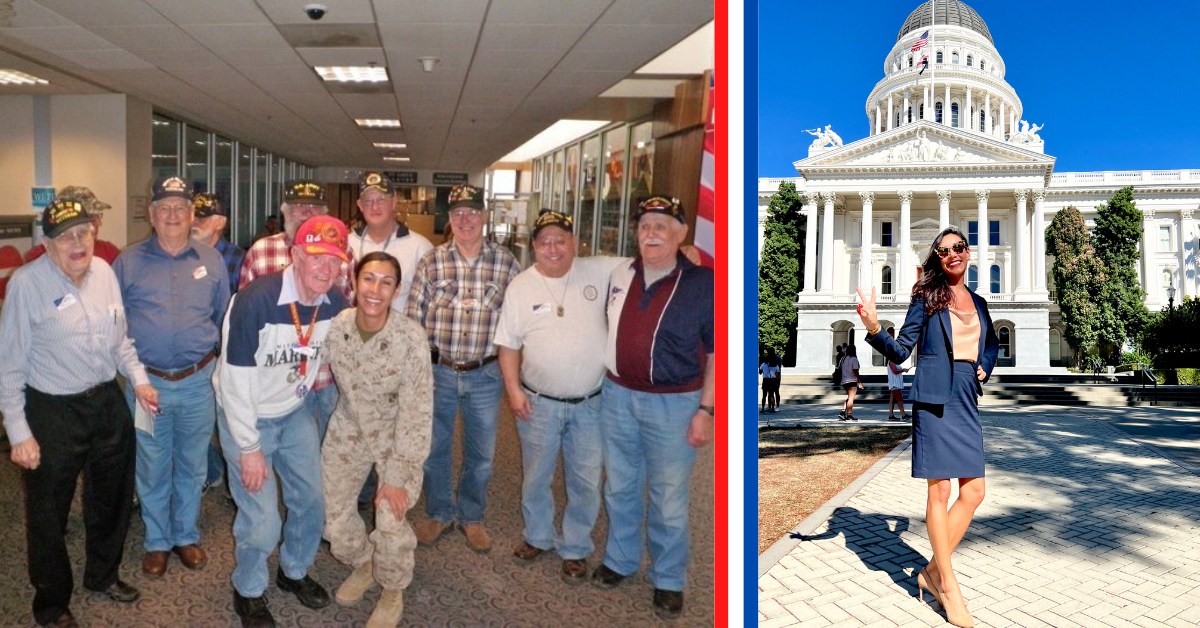 Veterans have become inundated with prescription medications from the VA to treat PTSD after 20 years of war, leading many to seek holistic options. Juliana Mercer is one of the loudest voices championing them. But before she was an advocate – she was a Marine.

“I was a senior in high school and had a sports scholarship lined up. The military was never really a thought in my mind but the recruiters were lined up in the strip mall plaza of my small town. One day I was bored,” she laughed.

After walking into the Army, Air Force and Navy offices – there wasn’t much interest. Next up was the Marine Corps recruiter. “I walked in and when I left I had signed my life away,” she shared. “Everything they told me a Marine did and was, it was something I wanted to be.”

Mercer graduated from basic training a week before the attacks of 9/11.

“As you know, everyone’s life changed, my life completely changed. I spent 11 years on active duty with a deployment to Iraq and Afghanistan. In between those two deployments, I worked at the Naval Hospital in San Diego, at the Wounded Warrior detachment,” she explained. “I spent five years every day seeing the true cost of our country being at war. My deployments were pretty intense ones. During those years we took some of the highest numbers of casualties that we had since Vietnam. I saw losses myself and saw loss every day while I was working with our wounded.”

After transitioning from the corps in 2012, she fell easily into nonprofit work serving the military community.

“I’ve mostly worked with organizations that support veterans in transition. I focused a lot on employment, community engagement and really dedicated my life to trying to figure out how we can help my brothers and sisters thrive,” Mercer shared. “When I started working in the VSO space, veteran unemployment was almost three times the civilian unemployment rate. 10 years later, we have it down to lower than the civilian unemployment rate. So, we’ve moved the needle on some things but we still haven’t moved the needle on mental health issues and finding real solutions for our veterans that are struggling.”

Despite being fulfilled in service, Mercer never took time to process her own trauma from her war experiences and from absorbing all of the stories she was surrounded with. “Because of the work that I’d done I knew that there was something wrong and I needed help,” she added.

Seeking support in 2019 led her to Heroic Hearts Project, a nonprofit organization dedicated to treating combat-veterans and survivors of military sexual assault with Ayahuasca. The medicinal plant has a history of use that dates back over 1,000 years.

“I was able to go down to Costa Rica to do Ayahuasca and that opened the door for this intense healing. I also had a psilocybin and in that therapeutic session, overnight – our country being at war for almost 20 years – everything that came along with that trauma like the grief and all of the pain just completely released,” Mercer shared. “I was back to that loving, authentic self that had been pretty much drowned by all the things that I was carrying. I immediately knew that this was the solution that I had been looking for and got really engaged with the Heroic Hearts Project.”

She is now on its board of directors and coaches veterans through their own journeys both during and after their treatment experiences. “I am advocating for a number of therapies to be approved by the VA. MDMA is now in stage-three of the FDA clinical trials,” Mercer said. “The fight is going to be getting it into the VA so that our veterans have access to it. My life was changed, if not saved. I’ve been able to connect dozens of veterans to these therapies and have first hand witness how life changing and life saving these therapies are. I’m so thankful to have found this because I know, there are lives that have been saved because of it.”

When asked what people would be surprised to learn about her, there was some laughter.

“I think people in general are surprised I am an advocate for psychedelic therapy since it doesn’t really go hand in hand with the military,” Mercer said. “I would encourage anyone suffering from PTSD, depression or MST to look into the Heroic Hearts Project. There’s solutions outside of what we’re used to.”

To learn more about the Heroic Hearts Project, click here.