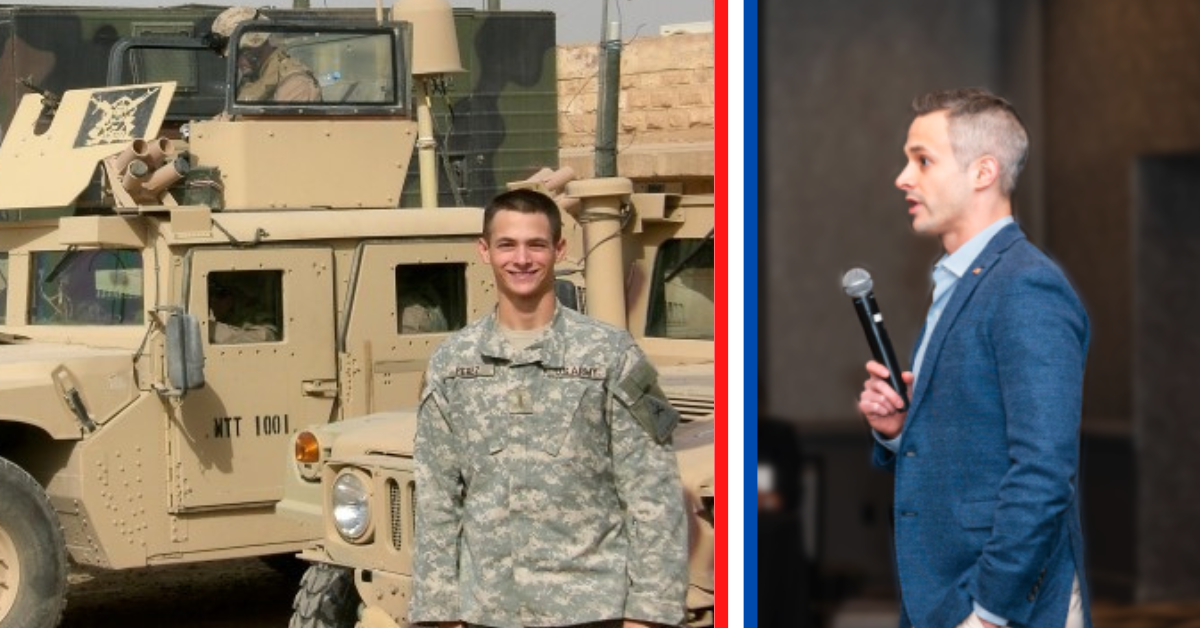 Today, John Perez is the Head of Military and Veteran Affairs for Johnson & Johnson. But first, he was a soldier.

“I was a senior in high school during the attacks on 9/11. I had always believed in service and was planning on joining the military throughout my high school years,” he shared. Watching the smoke rise from his New Jersey hometown, the commitment solidified in the ashes of the attacks.

Perez chose to commission into the Army, thinking it would be the fastest path to make the biggest impact. “I was able to graduate college in three years and was commissioned as a Signal Corps Officer, immediately went to initial training, and then joined my unit in Germany which had just forward deployed to Kuwait was about to go to Iraq,” he said. “I deployed in 2006 to Ramadi, Iraq, went through a unit reset and again deployed in 2008 for about 14 months to Iraq.”

After his second deployment he made the decision to transition into the Army Reserves and enrolled in a graduate program at Yale University. At graduation he joined Johnson & Johnson and had roles in different businesses and functions, including supply chain and acquisitions and divestitures. Now he leads military and veteran programming at the company in his current role as the Head of Military and Veteran Affairs.

A New Kind of Service to Country

“My first day as an intern within Johnson & Johnson, the first person to greet me was the head of the company’s veteran employee resource group – really helping to create an immediate sense of belonging,” Perez said.

He credits his time in the Army with building the foundation of everything he’s done since. “You’re really empowering individuals to go and learn by giving them great responsibility early in their career. Then you have a culture that is about testing and learning and growing, while staying grounded in values because being ethical is non-negotiable,” he said. “The military teaches you to make calculated decisions where you’ve assessed the risk and you’re then executing against your plan. And when the execution is done you spend time to learn from your experience. The military is the type of culture that enables this type of learning at the most junior level possible and early in your career. It’s empowering.”

It was obvious when he attended graduate school that his experiences as a soldier were instrumental in his success. “Everybody was very impressive in their professional backgrounds and incredibly intelligent. But the number of these early in career individuals that had the opportunity to lead people, to lead teams, whether it’s in direct reports or even on small projects, was more limited. The military really developed the skill of leadership immensely,” Perez added.

He’s used that approach in the roles he’s held at the company over the last decade. There were also big lessons early on that carry him through with his work still today.

“When I take on new teams or team members, I always go back to the first conversation I had with my first senior NCO. He gave me two pieces of advice that I think about all the time: it was first to take care of your team and your team will take care of you – to be a people-first leader. And second  to never expect to be treated better than anybody else in any situation,” Perez explained. “Everybody gets treated differently based on their role or seniority, but it’s the expectation of better treatment that creates negative behaviors you may not even realize you are doing.”

Take Care of Your Team

Words he lives by, even working for arguably the world’s largest health care company – which dates back to the 19th century.

”When we talk about Johnson & Johnson military programming, we talk about a really proud legacy of purposeful support that started in 1898, when the company held positions for employees who volunteered to serve in the US military in the Spanish American War,” Perez shared.

The programming has continued to evolve in the years since, leading to extraordinary benefits for National Guard and Reserve employees, as well as recent grant opportunities for healthcare innovators focusing on the unique needs of the military and veteran communities.

“It’s so great to see the programming growth.  For example, in the last year we’ve created an innovative paid time off program for military spouses going through military moves and launched a military spouse network within our employee resource group structure,” he shared. “We’re always trying to think of new ways to go and help those in need of support and engage those individuals in a way that we haven’t before.”

As he looks towards the future of standing in the gap for those that serve, Perez is grateful to be in a position where he can continue to do good.

“I think the most important part of what we do at Johnson & Johnson is living into our purpose of transforming the trajectory of health for humanity. There is an important part of that purpose in meeting the unique health and wellness needs of the veteran and military populations,” he said. “Whether it’s physical trauma or mental health or oncology or beyond. At the end of the day, the most important thing that we’re doing is helping veterans, service members, and military families live healthier, happier lives.”

To learn more about Perez and his commitment to the military through Johnson & Johnson, click here.