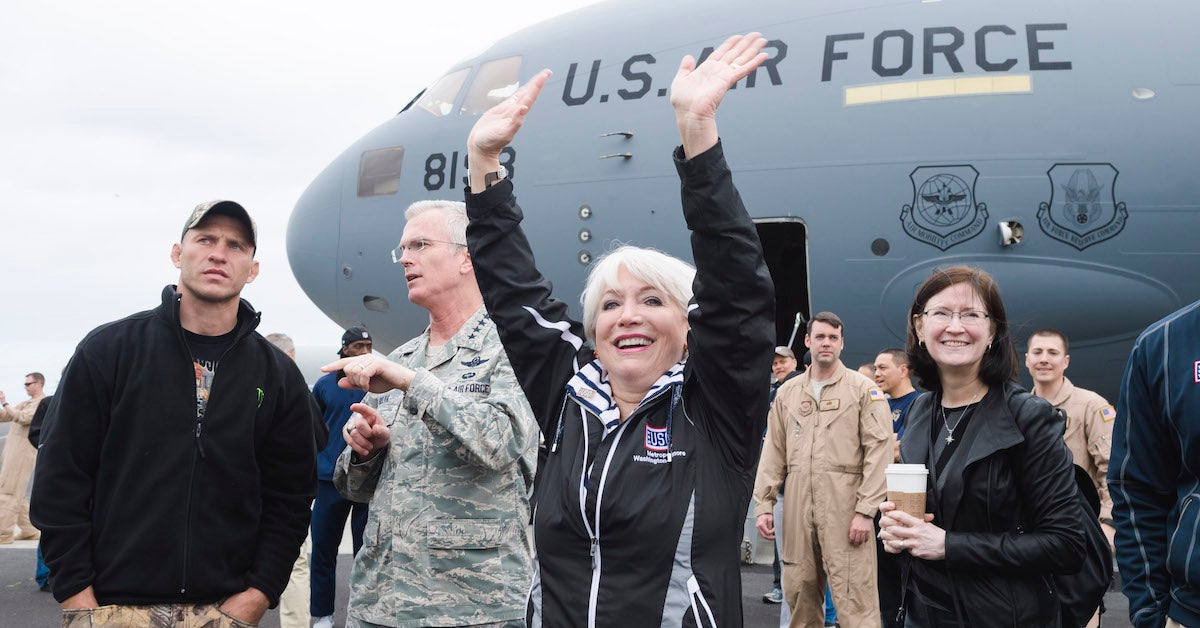 Elaine Rogers has been leading the USO-Metro in the Washington DC area since 1977 and has grown it to the largest USO affiliate in the world. Her dedication to the military community has made her a pioneer for social services. And she’s not done yet.

Rogers was born to a father who served with Patton during World War II. It was his service that inspired her. “I’ve always had that passion for the military. When Vietnam fell they had just set up camps in the United States as I finished college. I worked in one of those camps for the American Red Cross, alongside the military and our State Department. Then someone told me about a job at the USO,” she explained.

Rogers took a chance and a trip to D.C. and was hired on the spot. She worked alongside Bob Hope and after only a year of being a program director, she was made the president of USO-Metro. “When the draft stopped and the all-volunteer force came in, all of a sudden there were families coming in, too. We were the first USO to actually start family programming and really help spouses as they came into the military. I am so proud of that,” Rogers said.

What followed was a complete change from what the USO had been known for — Saturday night dances and entertainment. “We became a true social service organization. It was very difficult in the beginning because the people running the military didn’t understand what family programming was,” Rogers explained. “It was also difficult to raise money because the Vietnam war was so unpopular, so getting people to give money to an organization that served the military was challenging.” But, she persisted – deeply believing in the USO’s potential.

Rogers worked hard to get permission to put USOs on installations, a feat that would change the scope of the organization’s ability to directly serve those in uniform and their families. “We started doing heavy outreach and continuing to grow programs. Our entertainment has never gone away but it’s a very small piece of what we do now,” she shared. When the attacks of 9/11 occurred, her USO was poised as a first responding organization, welcoming thousands after the plane hit the Pentagon. “We were literally working with the military to figure out what our USO could do and how we could house all the families.”

As the War on Terror began, the USO-Metro began supporting the wounded and their families –  a task they were ready and able to do, with honor. Almost 20 years since then, they are still caring for the fallen, wounded and their families. The comfort and support offered to the military community is no small gift. It’s a blessing that has changed and impacted countless lives.

The USO has grown in spades since the early days, working hand in hand with the military. Watching the change has been a beautiful experience, Rogers shared. “I’ve had the experience of watching the first female commander of Walter Reed. The first woman who became a Master Chief Petty Officer. Witnessing the evolution of the military – especially for the women – has been amazing and really something to watch,” she said.

When Rogers was named one of the Mighty 25, she was shocked. “I always feel guilty because I don’t feel I deserve anything. I have the best job in the world,” she said. “What better could you do? I get to meet heroes every day!” She was also quick to say that without the USO’s incredible volunteers, they wouldn’t be in existence. In the USO-Metro area alone, there are over 1,200 volunteers willingly giving their time.

Despite an impressive career that has spanned over 40 years in the USO, there’s no end in sight for Rogers. With her innovation, dedication and tireless belief in service, she’s changed the landscape of giving back to the military. She’s been asked numerous times if she’s tired yet, which makes her laugh. “I tell people no – I am more energized today than I’ve ever been,” she said with a smile. Rogers encourages people to find the things that bring them joy and purpose. Then, never look back.