The complete guide to Hill Air Force Base 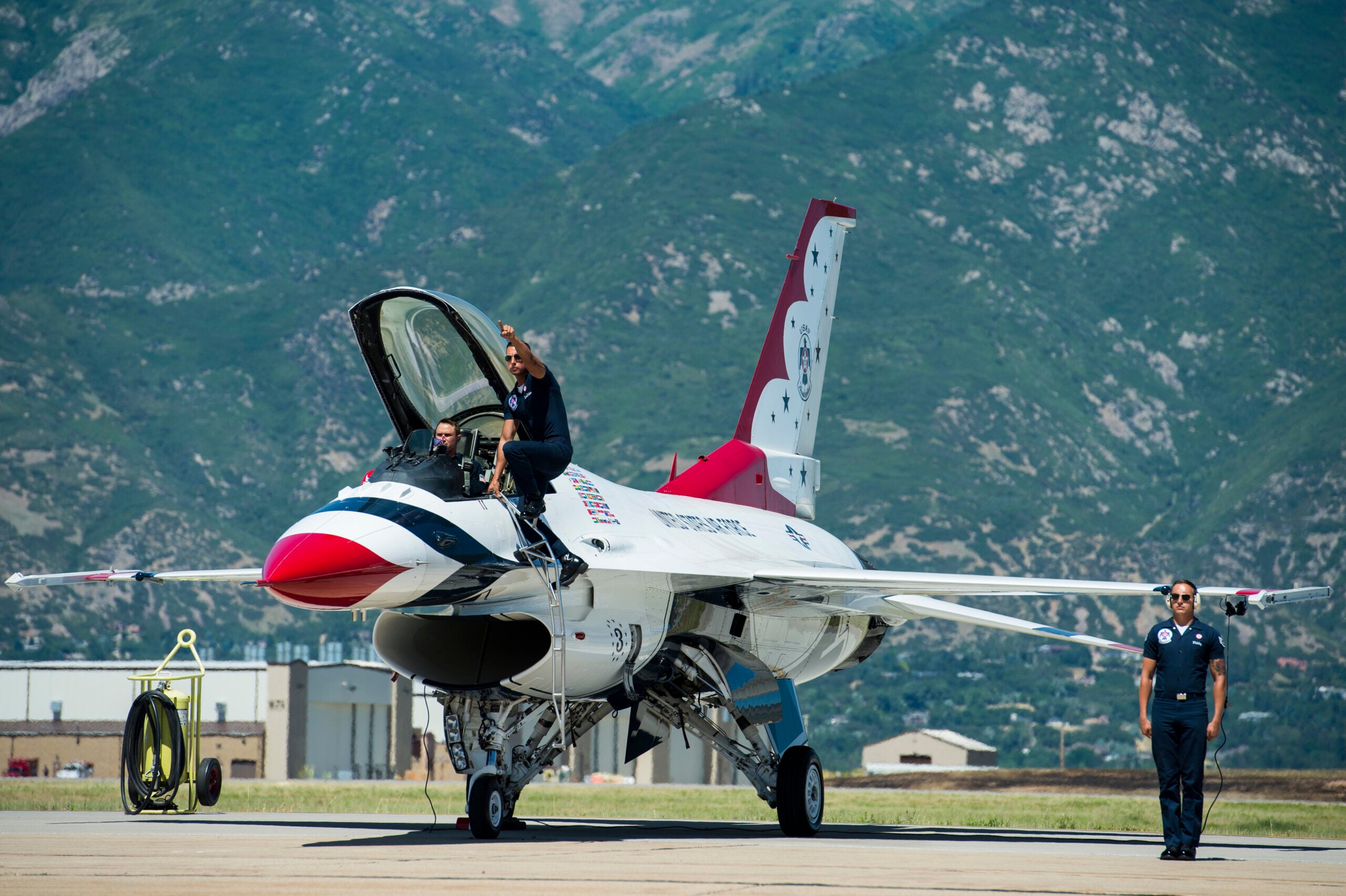 Staff Sgt. Sean MacGibbon, Tactical Aircraft Maintenance, signals to the Line Cone during the ground demonstration at the Warriors over the Wasatch air show at Hill Air Force Base, Utah, June 26, 2016. The Thunderbirds demonstrate the highest level of attention to detail and professionalism that represents team work, discipline and capability of our men and women serving in the U.S. Air Force around the world. (U.S. Air Force photo/Tech. Sgt. Christopher Boitz).

Did you ever think that your career with the Air Force would take you to Utah? Well, if you’re heading to Hill AFB, then that’s exactly where you’re heading! Hill is one of the most vibrant spots on the Utah landscape and that’s not just because it’s the sixth-largest employer in the state! Speaking of Utah, here’s what happened when the Mormons accidentally went to war with the Army. It’s also home to the AF Materiel Command’s Ogden Air Logistics Complex. That makes it the world’s manager for a dazzling array of aircraft, missiles, and avionics. Because it’s such a large base, you’ll find plenty of military communities in the surrounding areas. There’s also plenty to do, since Salt Lake City is pretty close by. If you love outdoor activities, cozy, snowy winters and world-class skiing, then Hill AFB is for you!

Hill Air Force Base is located just south of the city of Ogden in northern Utah. The Great Salt Lake is west of the base.

Hill AFB can be reached by car using the following routes.

Making the trek from the east? Take I-84 W, and follow signs for Salt Lake City, then follow signs.

Coming from the west? Take I-80 E toward Ogden.

There is an airport in Ogden, UT, but recently both Allegiant and Avelo Air ended their service to Ogden, so Salt Lake City is the closest airport for commercial flights.

Driving to Hill AFB would allow you to visit other cities near Ogden. From the East Coast, it might be a long drive, but those Utah mountains will be worth it!

Ogden is all about providing quality materials to maintain and sustain operational forces. The 75th Air Base Wing provides base operating support for the Ogden Air Logistics Center, the 388th and 419th Fighter Wings, and 25 tenant units.

Hill AFB is known for the aircraft maintenance and repair work of the Ogden Air Logistics Center. The 75th Air Base Wing provides base operating support for the center. Moreover, Hill has 25 tenant units in addition to the 75th. That’s to say nothing of the missions of the 388th Fighter Wing and 419th Fighter Wing. This means that HIll is one busy place!

Surprisingly, the Ogden Air Depot predates WWII. In fact, it was built in 1939 and named Hill Field, in honor of Maj. Ployer Peter Hill, a service member who died in the crash of an experimental Boeing aircraft.

Because of its remote location, Hill was relatively unchanged for several years. Then, in the 1950s, AF jet fighters came on the scene. Hill’s remote location provided useful to the AF as a testing ground for plenty of air frames. These include the F-84F Thunderstreak, and F-84G Thunderjet, not to mention the RF-84J Thunderflash, F-89 Scorpion, and the B-57 Night Intruder.

In the 1970s, Hill AFB became a crucial part of the Air Force’s F-16 Fighting Falcon operations. The Air Logistics Center was responsible for maintenance for a wide geographic area, including Alaska, western Canada, Idaho, Montana, North and South Dakota, Wyoming, and elsewhere.

Things to Do Around Hill AFB

George Eccles Dinosaur Park (12 miles) is a 5-acre park with more than 100 dinosaur replicas and a museum with hands-on activities.

Flowrider Utah (10 miles) is an indoor surfing facility that offers lessons for both surfing and bodyboarding.

The Ogden Nature Center (11 miles) is a 152-acre nature preserve and education center with walking trails, bird watching and plenty of live exhibits.

Housing at Hill Air Force Base

First things first – call the Military Housing Office as soon as you receive orders. The office can help with filing the appropriate paperwork to get on the housing wait list.

The MHO can assist you in finding off-base housing as well.

Because Hill AFB is so large, there are plenty of schools to choose from! In fact, mil-kids in the area are served by more than 90 elementary schools. That’s to say nothing of the 25 junior high schools and 15 high schools. There are also five alternative schools in the area. School assignment is based on where you live. Call the School Liaison Office for more information.

What planes are at Hill AFB?

What county is Hill AFB in?

Does Hill AFB have a vet?

What is Hill AFB known for?