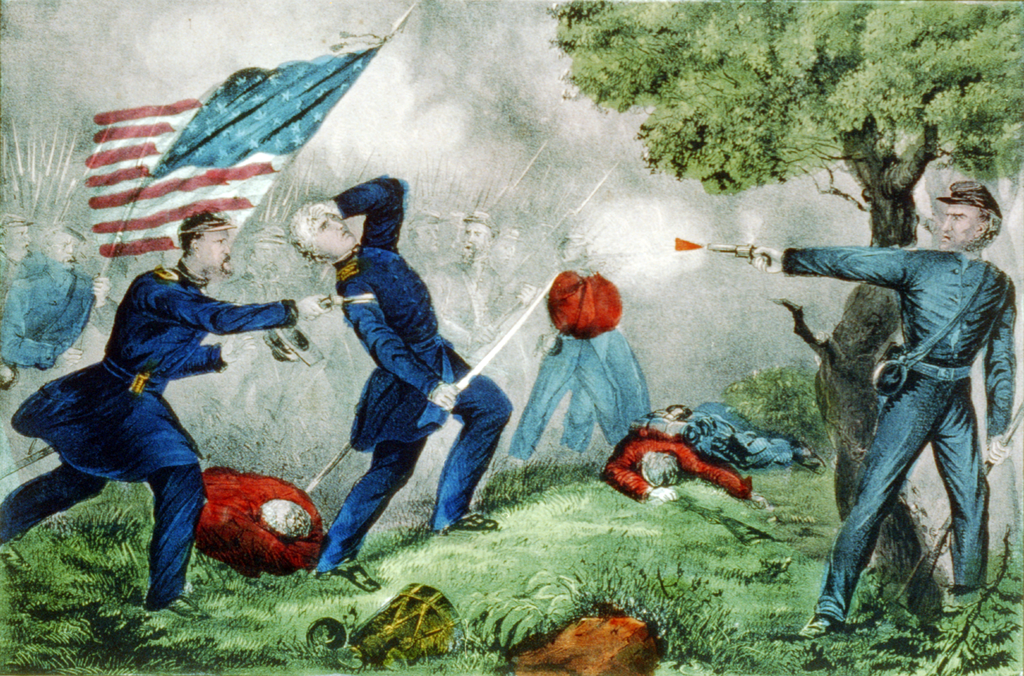 While it’s true a lot of Americans were conscripted, people from all walks of life volunteered their service during the Civil War. On the Union side, wealthy and important people could evade the draft by paying $300 to the U.S. government. Today, it would be easy to imagine a sitting American senator (or all senators) paying this fee, but back then, at least one wasn’t about to shirk his duty.

Edward Dickinson Baker was a former U.S. Representative from Illinois and was later elected to the U.S. Senate to represent the State of Oregon. He was also a veteran military officer who served with distinction during the Mexican-American War. When the Civil War broke out in 1861, Baker signed on to don the uniform one more time. It would be his last.

Baker was born in England and emigrated to the United States in 1816. Eventually his family settled in the Illinois Territory. As a young man, he studied law and became a self-taught lawyer, much like his future close friend, Abraham Lincoln. His military career started early as a militia leader who pursued the mob that murdered Joseph Smith, founder of the Mormon Church in 1844.

During the Mexican War, Baker was an officer who fought in the Siege of Veracruz and later commanded a regiment of infantry volunteers at the Battle of Cerro Gordo. In 1847, he was released from military service and was elected to the U.S. House of Representatives from 1849 to 1851. Eventually, he moved his family west, where they settled in Oregon.

In 1859, the Baker family had planted roots in Oregon and Baker was appointed to fill Oregon’s vacancy in the U.S. Senate. Then in 1861, the Confederate States seceded from the Union and opened fire on Fort Sumter. President Lincoln called for 75,000 volunteers to put down the rebellion and force the southern states back to the Union and to adhere to federal law. Baker joined this cause.

Baker headed east to recruit volunteers from the northern states of New York and Pennsylvania. They elected him brigadier general in 1861, but he declined and took his post as a colonel of volunteers instead. He would lead the 71st Regiment of Pennsylvania Volunteer Infantry that year. When he was later offered a major general’s post, he accepted.

He marched his forces to Loudoun County Virginia, to join Gen. George McClellan’s Army of the Potomac in 1861. McClellan was mounting a reconnaissance to determine whether the Confederate Army controlled a vital bridge crossing along the Potomac River. The patrol came back with the news that there was an unguarded Rebel camp nearby, so the Union forces mounted up to seize it.

12 miles south of Leesburg, Virginia, The Union Army was moving slowly south but there was no actual camp there. When Union forces crossed the river, hoping to catch the rebels off guard, they found just a grove of trees. Instead of going back to their lines immediately, they sent a runner for new orders. The headquarters sent more men so the Union could move south toward Leesburg on a further reconnaissance mission. Baker was sent back but encountered a messenger with reports that fighting was taking place close by. He gathered as many men as he could and rode toward the fight.

Only there weren’t enough boats to cross the river. So the Union force took all day to cross piecemeal. The main force across the river was now fighting More and more Confederate troops, in what would become known as the Battle of Balls Bluff. When Baker finally arrived on  the scene, he was killed in action and remains the only sitting U.S. Senator to die in combat.