Veteran shares story of hope, thanks to K9s for Warriors - We Are The Mighty

Veteran shares story of hope, thanks to K9s for Warriors 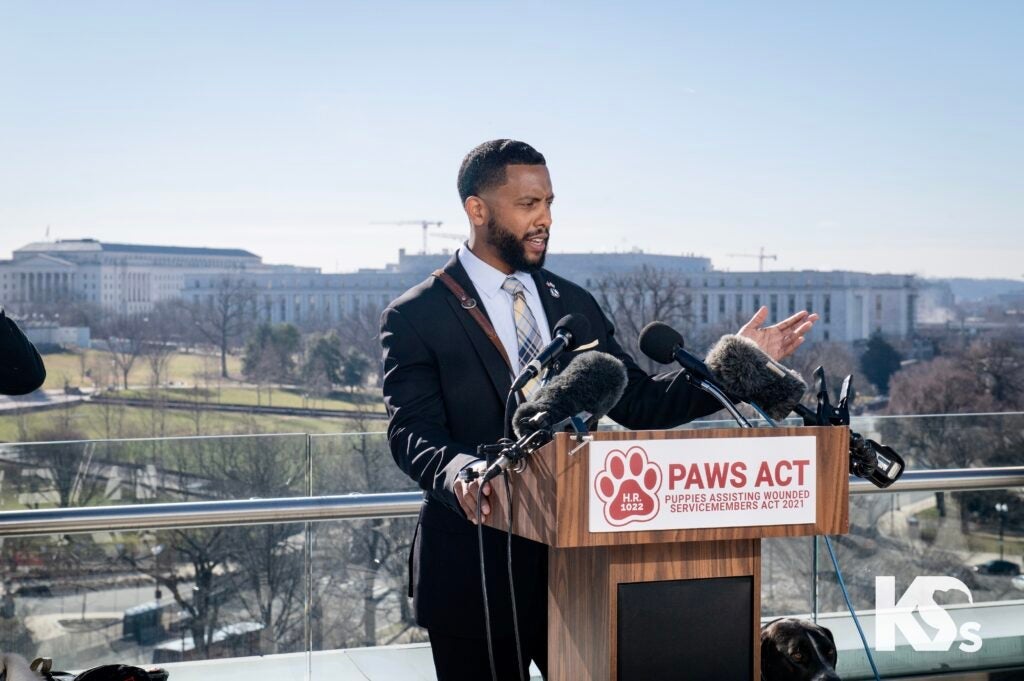 Dogs have long been known as “man’s best friend” but it wasn’t until recently we knew how vital the connection and companionship would be. K9s for Warriors is saving lives because of it.

When retired Army National Guard Master Sergeant David Crenshaw enlisted in 2000, it was a lifelong dream realized. He was in the middle of Army Basic Training when the planes hit the World Trade Center and life was forever changed, for everyone. When he wasn’t drilling, Crenshaw was a volunteer firefighter.

He was deployed to Iraq in 2004, which had been invaded by U.S. troops the year before. Crenshaw was Military Police and assigned to Personal Protective Detail. Although he returned home 15 months later thinking he was fine, he wasn’t. 2005 began a slow decline, one which he never anticipated.

“I’m from the northeast right outside of New York so 9/11 had a huge impact on me,” Crenshaw shared. “It’s just one of those stories of a kid in America who wanted to go do his job. You do your job and what’s asked of you over there…I remember someone telling me if I ever wanted to do anything else not to tell them [the Army] I was having any mental problems.”

So he stayed quiet. Once he returned home, he became a 911 dispatch operator until he left to become a firefighter in 2006. A year later he went to the academy and became a police officer. It was a role he’d hold for seven years. In 2010 he began his new job as an instructor for the Army’s Officer Candidate School.

In 2014 he made a move from the police department to the prosecutor’s office in order to do special investigative work. Crenshaw spent almost a year undercover with the gang and narcotic operations. It took its toll.

“It started to play on me. Morally, it wasn’t who I was as a person. It also started to affect things that were happening around me. All the symptoms that come about with PTSD like the hyper vigilance, paranoia, always on guard – all that stuff was being amplified,” Crenshaw explained. His mother was also diagnosed with stage IV cancer during this time. “I didn’t realize this was PTSD, I thought it was just the stress of the job and my sick mother.”

It was toward the end of the investigation when Crenshaw began to realize something was wrong. A VA appointment would lead to being labeled with PTSD, but highly functioning. Unfortunately, all he heard was the past part of the diagnosis.  “About a year to the day, I had what I like to call my fall from grace,” he shared.

During this time he became his mother’s hospice caretaker and watched her pass away. Simultaneously, he was in the middle of a divorce and a contentious custody battle. “The day she passed, that’s when my PTSD skyrocketed,” Crenshaw shared. “ I know of the process of how they remove the body. All I kept thinking about was Iraq and the two bodies we put on the helicopter.”

This would lead to thinking about death every time he knocked on a door with SWAT to execute a search warrant. With Crensaw always being first in, he knew the risk. “I kept saying, ‘Is this going to be the day I catch it?” but I was saying it almost with a sense of relief,” he said. Things got progressively worse, leading to an altercation with his now ex-wife.

His fall, as he called it, led to losing his job with the prosecutor’s office. “It was actually a load off my shoulders but it was short lived because then it became a fight for my life,” Crenshaw shared. He credits K9s for Warriors helping to save his life, thanks to his service dog, Doc.

From the moment they were paired, Crenshaw felt the connection. He realized it that first night by watching how Doc calmed him before he even knew he was becoming anxious. His life was forever changed. “He’s wearing all of my stuff. My burdens, worries and anxiety,” Crenshaw shared. “PTSD was a weight at my ankle holding me down. It’s no different than a drug or an addiction, it really does sit there and lie in wait.”

Crenshaw is open in sharing he’ll never be cured from his PTSD, however, Doc’s continuous presence manages it and allows him to lead a new and fulfilling life. But the path to getting a service animal isn’t easy and often comes with long wait times. It’s something K9s for Warriors is hoping to change.

The PAWS Act (Puppies Assisting Wounded Servicemembers) was reintroduced into Congress on March 3, 2021. K9s for Warriors, the largest provider of service animals to veterans, is backing it. If passed, it would require the VA to provide grants to pay for service dogs for eligible veterans. “I hope the PAWS Act is just the first leg…We need to find a way to come together and make one loud unified voice on this,” he said.

Although Crenshaw was quick to point out his incredible mental health team at the VA, he was also open about the problems and continued barriers. Namely, the unending prescription pills fostered onto him for his symptoms. All of which he no longer has to take, thanks to Doc.

The endless bureaucratic red tape and fight Crenshaw endured for his medical retirement, mental health support and to get Doc was exhausting, he said. Although he made it out the other side, he wasn’t unscathed from the experience of seeking help. It’s a fight many veterans give up on.

“My main goal in life now is to just be here for veterans and cops, too,” Crenshaw said. “It’s amazing how many cracks there are and how many barriers there are from the military to the VA and even in the civilian world with the understanding. So, wherever and however I can advocate for them… I will.”