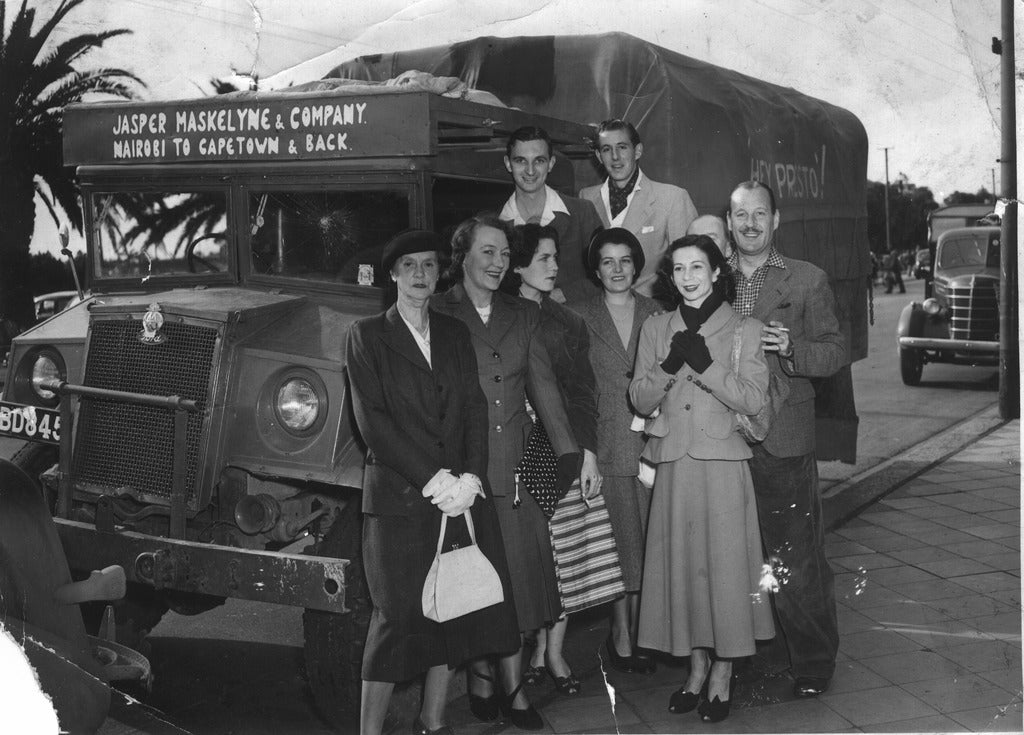 Jasper Maskelyne and his magic troupe departing from Nairobi in 1950. Jasper Maskelyne is on the right, touching the arm of Yvonne Helliwell, his stage assistant. (Wikimedia Commons).

Battlefield deception was of prime importance in World War II, especially in preparation for the D-Day landings. The importance of D-Day and the successful tricks played on the Axis to deceive spies and reconnaissance before June 6, 1944 overshadows a lot of other, potentially more unbelievable tricks.

Many of the most unbelievable “forgotten” deceptions of World War II came at the hands of Jasper Maskelyne, a performer who came from a family of stage magicians before the war. His greatest wartime accomplishments was protecting critical infrastructure like the port or Alexandria and the Suez Canal – by making them disappear.

Maskelyne was well-known for his performances as a magician before World War II, performing card tricks, sleight-of-hand tricks and other popular acts of magic. After joining the Royal Engineers at the start of the war, he was not considered one of Britain’s top soldiers. Even after attending the Camouflage Development and Training Centre, he still lacked the ability to hide things like pillboxes and bunkers.

British intelligence still believed that his experience could be useful and sent him to Cairo to produce gadgets that could be used to help prisoners of war evade capture or escape confinement. His greatest tricks were yet to come.

The British needed to protect the harbor at Alexandria and the Royal Navy ships moored there from Axis bombing raids. Hiding it by day would be difficult, given its sheer size, but nighttime bombing runs would be different. Despite its size, Maskelyne constructed a decoy using mud, cardboard, and lights to replicate the look of the port and the ships.

When German Luftwaffe bombers made nighttime bombing runs on the dummy harbor, Maskelyne used pre-planted explosives to simulae the destruction of the bombers’ targets. The more the enemy planes dropped, the more of his fake harbor he would destroy. The ruse worked. Alexandria harbor kept its lights off at night while the Germans bombed the dummy.

For their next trick Maskelyne and his “Magic Gang” were tasked with protecting the Suez Canal and the international shipping that passed through it with their special brand of “magic” camouflage. At first, they were asked to use powerful spotlights to confuse German bomber pilots.

Instead of just using the new lights, he converted them into powerful strobe lights that would confuse and disorient the enemy pilots. This had the double effect of helping to protect the international waterway while even downing some of the enemy planes. He used mirrors to prevent the Axis bombers from zeroing in on the canal.

His crowning achievement actually came on the battlefield of El-Alamein. With German Field Marshal Erwin Rommel firmly in control of the strategic city, Maskelyne created a dummy army  to the far south of the area. It came complete with dummy men, tanks and aircraft. When this dummy army became so large that Rommel could not ignore it, he sent a large detachment of the Afrika Korps south to meet this new army in battle. They would quickly learn that it wasn’t everything it was supposed to be.

While the Nazis moved south to investigate and destroy the fake force, British Field Marshal Bernard Montgomery launched his attack on El-Alamein in the north, pushing the Nazis out. The underprepared defenders were famously routed in the wake of Maskelyne’s deception. It wasn’t the sole reason Monty’s attack worked, but it sure helped.

The full extent of Maskelyne’s contributions may never be known, even so long after the war’s end. After El-Alamein, he spent the war mostly performing for deployed troops, but his full wartime record is still protected by the British Official Secrets Act, and won’t be available for release until 2046.