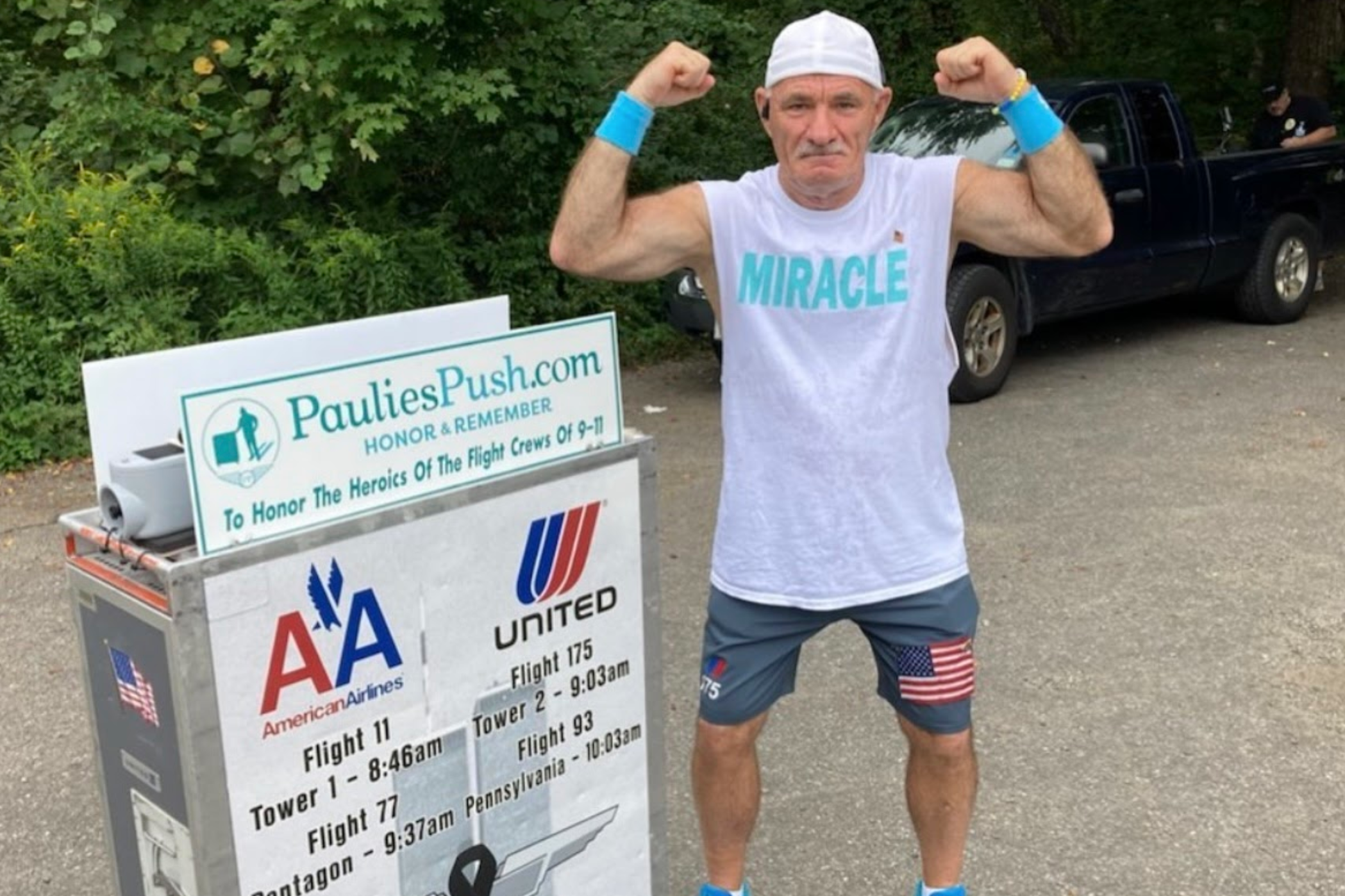 On the left side of Paulie Veneto’s shorts is an American flag. He pins it there every morning after getting dressed, prepping to push an airline beverage cart from Boston to Ground Zero, a 220-mile journey.

The former United Airlines flight attendant is doing so to honor his former coworkers, as well as other airline employees who lost their lives on September 11th.

The flag has its own importance; it was presented by Dave McGillivray, executive director of the Boston Marathon.

“​​His mother gave him that flag 42 years ago and he wore it running across the country,” Paulie told WATM. “Even telling you this I get emotional … I get up every morning and pin it on.”

Along the way, Paulie has met countless followers. Supporters, sponsors, fans, those of all ages who want to support his cause … or find their own peace in the process.

“There’s no division,” he said. “It’s crazy. People — all they care about is shaking my hand. I know they’re getting some type of relief from it; how could I not be grateful?” he said. “The stories are endless. It’s crazy. I never dreamed it would get this much support.” 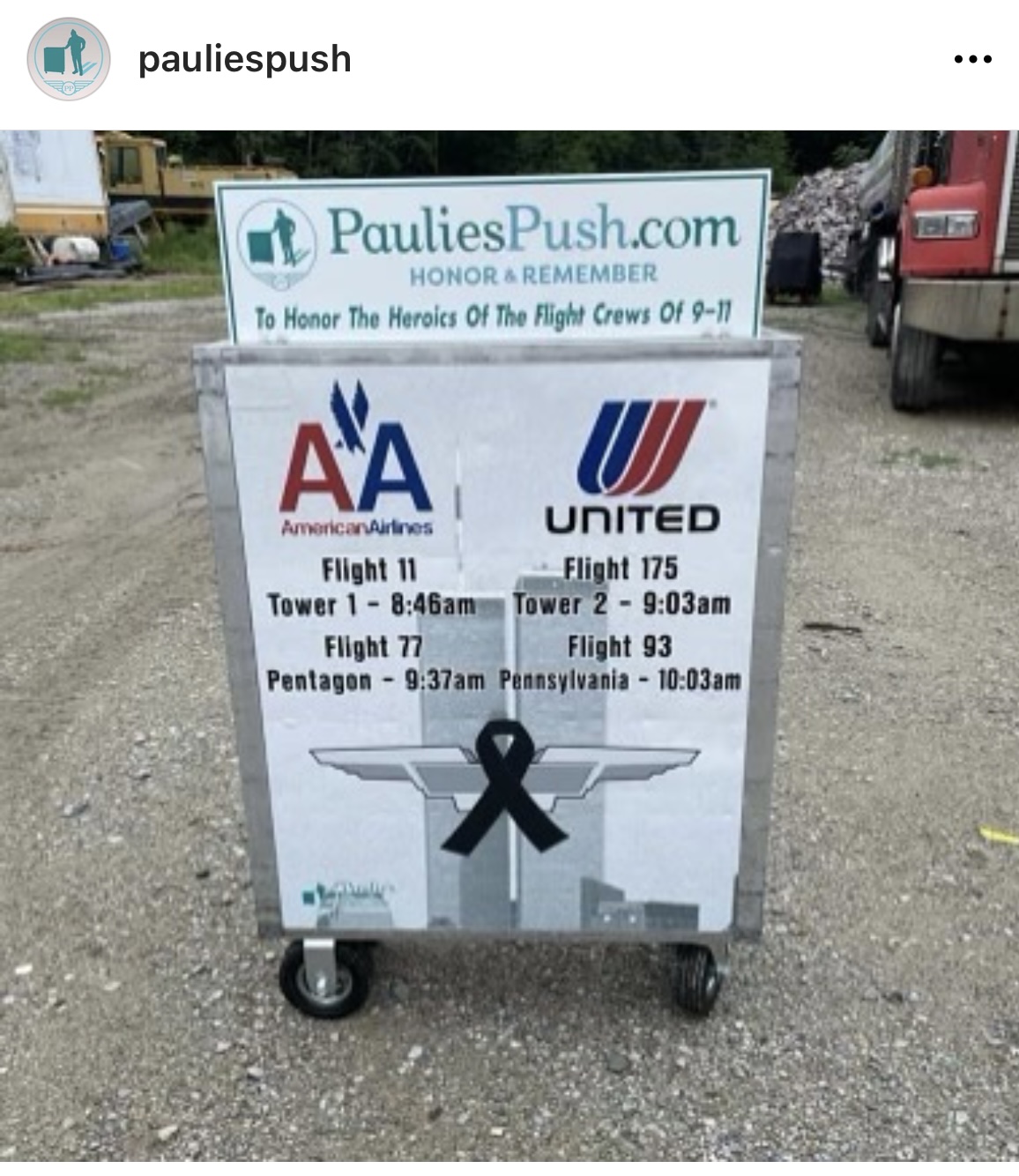 Paulie’s beverage cart is strapped with a camera that takes a picture every 30 seconds and sends live updates so fans can pinpoint his location and follow along online. Image: @PauliesPush Instagram

Alternating between two beverage carts — one for the road and a more rugged version for off-road terrain — Paulie planned his big push with only one goal in mind: to honor the fallen.

“They were the first responders. They weren’t trained to fight terrorism but they did it anyway. They did the best they could and they did it to protect others,” he said. “Their relatives need to know they were heroes. It’s amazing what they were able to accomplish under those conditions.”

Paulie adds that he wishes the nod wouldn’t have taken 20 years, but he had his own battles to win out. His regular route took Boston to L.A.; Tuesday, September 11, 2001 was his day off. He returned to work, but masked it, eventually becoming addicted to opioids.

“If you don’t quit five minutes before the miracle, you’ll be on the other side of it, too. I’m living proof of that,” said Paulie Veneto. He says this of his wardrobe choice. Every day, pairing his flag with a shirt that says miracle, reminding himself, and others just how far he’s come.

In 2015, Paulie got sober, coming out of that “dark dark place that a lot of people have gone.” Now, with his newfound freedom, he plans to do something he said he should’ve done long ago: recognize the airplane crew members who died in 9/11.

“A lot of these remaining family members, no one has told them their relative is a hero. They got overshadowed because it was so big,” he said. “As Americans, I feel like we should all be recognizing them. That’s what we’re supposed to do is comfort their families.”

Paulie’s Push has been funded by donations and sponsors. Additional funds will be divided between the airline workers’ families and their respective charities and Power Forward, a nonprofit company helping those with addiction.

Averaging 10-20 miles per day, Paulie and entourage will arrive at Ground Zero on September 11th. Follow his journey on Instagram at or at PauliesPush.com.