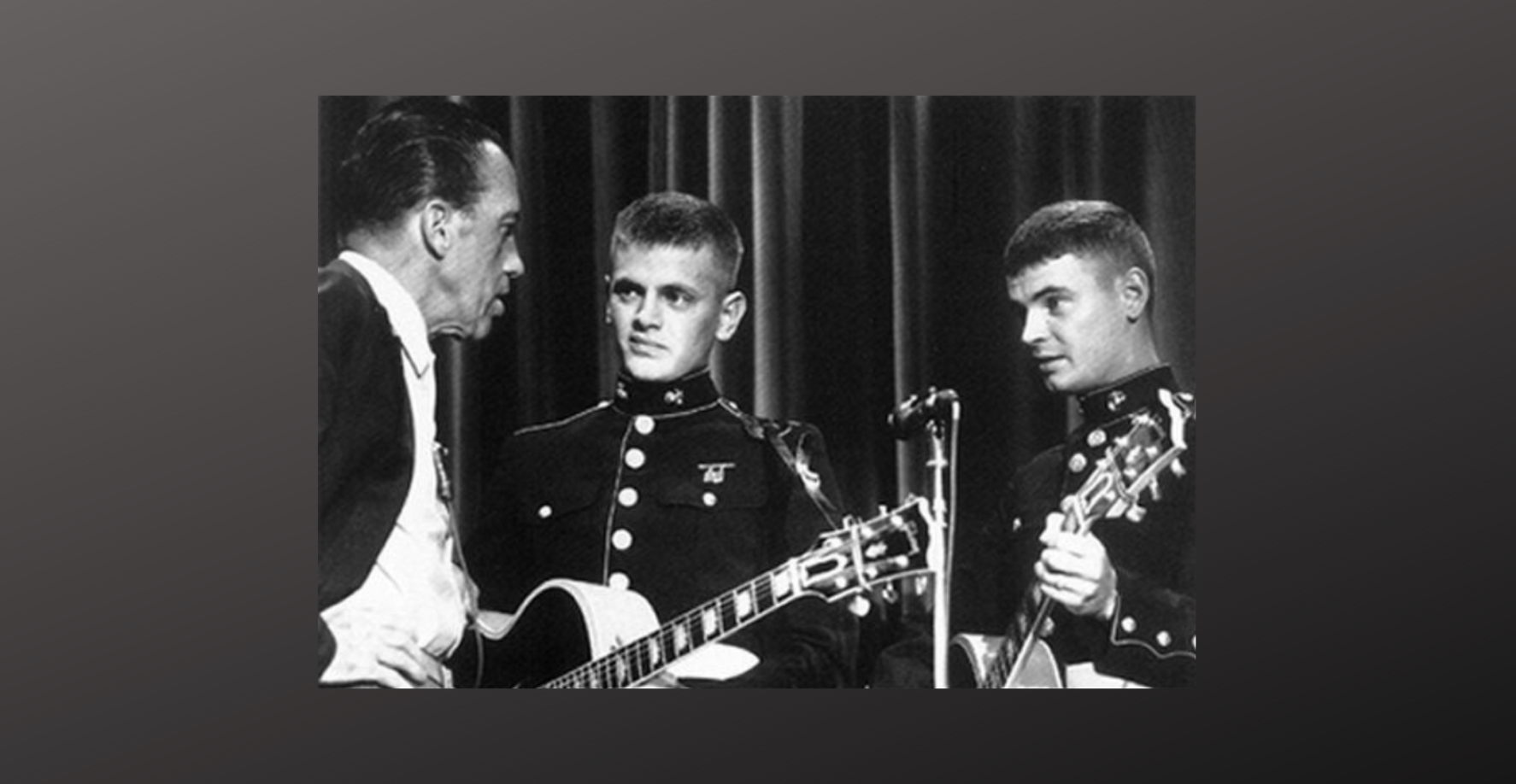 The Everly Brothers were one of the most influential rock and roll duos in music history. Their steel-string acoustic guitar playing and close harmony singing became iconic and influenced the likes of the Beatles, the Beach Boys, the Bee Gees, and Simon & Garfunkel. The younger Everly, Phil, passed away on Jan. 3, 2014. Older brother Don passed away on Aug. 22, 2021. While the brothers are well known for their part in the birth of rock and roll, many forget that the Everly Brothers were also United States Marines.

Don was born in 1937 and Phil was born two years later. The Everlys were a musical family and even sang together on the radio as “The Everly Family” in the 1940s. Don and Phil found a groove of their own and performed on the radio as “Little Donnie and Baby Boy Phil.” During high school, the brothers performed on a regional radio and TV variety program before they caught the attention of country music legend and RCA manager Chet Atkins, one of the founders of the Nashville sound.

In 1956, the Everly Brothers began writing and recording their own music. The next year, they recorded their first hit, “Bye Bye Love,” written by Felice and Boudleaux Bryant. Continuing to work with the Bryants, the Everly Brothers recorded more US and UK hits like “Wake Up Little Susie,” “All I Have to Do Is Dream,” “Bird Dog,” and “Problems.” The brothers still wrote some of their own songs like Don’s “(Till) I Kissed You” which reached No. 4 on the US pop charts.

In 1957 and 1958, the Everly Brothers toured with the iconic Buddy Holly. “We were all from the south,” Phil recalled. “We’d started in country music.” Reportedly, the brothers were the ones who convinced Holly and the Crickets to switch out their Levi’s and t-shirts for Ivy League suits like their own. Holly wrote and composed the song “Wishing” for the Everly Brothers.

In 1960, the Everly Brothers signed with Warner Bros. Records. That year, they wrote and composed their best-selling record, “Cathy’s Clown.” The song went on to sell eight million copies. Don and Phil continued to write and compose their own songs, many of which became top 10 hits. This musical success is even more impressive considering that they took time off from music to attend boot camp.

In 1961, the Everly Brothers enlisted in the United States Marine Corps Reserve. The duo attended 12 weeks of basic training at MCRD San Diego, fitting for Hollywood stars like themselves. On February 13, 1962, Phil and Don became the 781,001st and 782,000nd graduates of MCRD. That same day, Don married Venetia Stevenson. However, the MCRD chapel was undergoing renovations at the time. As a result, the brothers had to hurry from their graduation to the next door chapel at Naval Training Center San Diego. The San Diego Union wrote, “No sooner had (Phil and Don) heard the final bugle call, drum roll and sought-after words, ‘You are now Marines,’ from their commanding officer, Lt. Col. T.A. Stawicki, than they dashed off.”

Five days later, the Everly Brothers performed in Miami on “The Ed Sullivan Show.” The newly graduated Marines even wore their dress blues for the telecast. Although they reported to Camp Pendleton for their reserve duty like all other Marine Reservists, the Everly Brothers did it in a bit more style. A Marine veteran on a message board recalled that the brothers were once dropped off and picked up at the base by limos. Still, many others on the forum remember the Everlys as unassuming and hard-working Marines.

The Everly Brothers served six months in the Marine Corps Reserves before they returned to music full-time. Although their popularity began to decline through the 1960s, they continued to release hits singles and had many successful tours. In the early 1970s, Don and Phil began releasing solo recordings and officially broke up in 1973. However, ten years later, the brothers got back together and performed periodically until Phil’s death.

In 2015, Rolling Stone ranked the Everly Brothers number one on its list of the 20 Greatest Duos of All Time. The brothers were inducted into the Rock and Roll Hall of Fame in 1986 and the Country Music Hall of Fame in 2001. In 2019, Don was inducted into the Musicians Hall of Fame and Museum. He earned the organization’s first Riff Award for his distinctive rhythm guitar intro in “Wake Up Little Susie.” However, their fellow jarheads will argue that the greatest honor that the Everly Brothers received is the title of United States Marine.

Feature photo: The Everly Brothers in their dress blues on “The Ed Sullivan Show” (Public Domain)