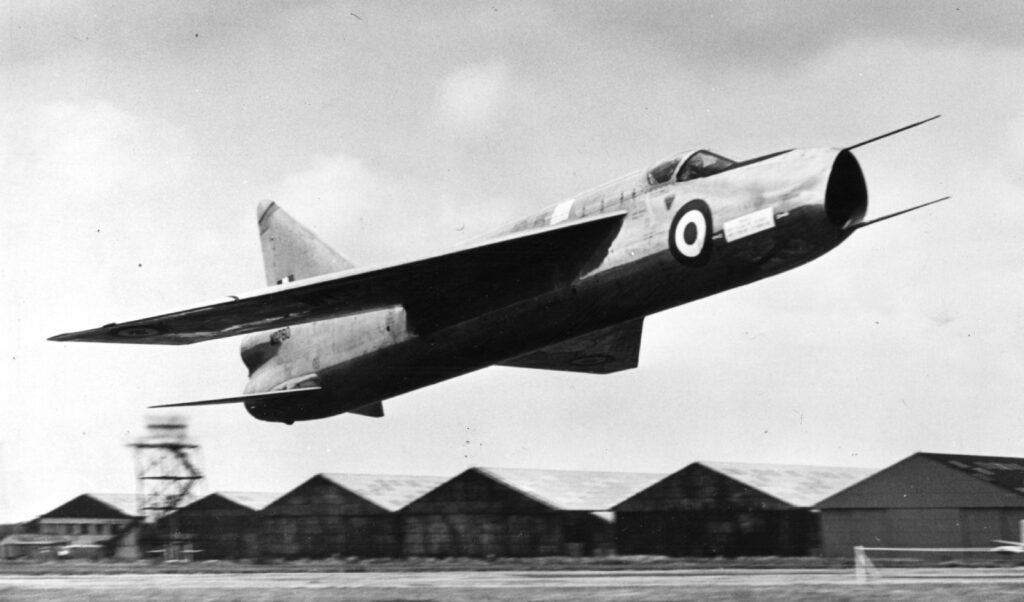 Visitors to air shows may fantasize about hopping in one of the aircraft on display and taking it for a joy ride. However, lengthy startup procedures and a lack of knowledge generally prevent this. During ground testing on an early supersonic fighter jet, an RAF engineer accidentally engaged the plane’s afterburner and found himself in the air. This is the story of Wing Commander Walter “Taffy” Holden’s wild ride in a twin-engine English Electric Lightning fighter jet with no helmet, no canopy, and no jet flying experience.

Holden enlisted in the RAF during the war in 1943. He earned a cadetship to a university and studied mechanical engineering. During this time, Holden also learned to fly on the de Havilland Tiger Moth biplane. Although he continued his RAF career as an engineer, Holden did earn his pilot’s wings after training on the T-6 Harvard and de Havilland Canada DHC-1 Chipmunk single-engine piston trainer planes. With his mechanical engineering background, Holden rose to the rank of Wing Commander and took command of No. 33 Maintenance Unit RAF and RAF Lyneham.

Holden’s maintenance unit was responsible for servicing Gloster Meteor fighter jets, English Electric Canberra jet bombers, and Lightnings. However, in 1966, the unit was in the process of disestablishment and was divesting its aircraft. To do this, checks had to be performed on the jets before they were sent off. Although the unit had a test pilot for the Meteors and Canberras, they didn’t have anyone qualified on supersonic Lightnings. Test pilots had to be brought in to conduct ground testing on these jets.

When it came time to perform checks on the Lightning registered XM.135, a test pilot wouldn’t be available for a week. Moreover, the aircraft was holding up the unit’s closure. A pilot who had performed previous Lightning tests suggested to Holden that he perform the tests himself. Each test required different electrical configurations with the engine pushed to high thrust, then cut and the brakes be applied. This meant taxiing for 30 to 40 yards at a time and would be a simple enough task for the experienced engineer and qualified pilot. Holden decided to give it a go.

On July 22, 1966, Holden performed the ground test. Since he wasn’t expecting to fly, he was not wearing a helmet and the aircraft was not fitted with a radio. Moreover, the canopy was removed to allow electrical wires to run out of the cockpit. The supersonic Lightning’s landing gear was also locked in the down position for test mode. Holden’s first test ran smoothly, with the aircraft rolling 30 to 40 yards before coming to a halt. However, on a subsequent test, Holden accidentally pushed the throttle past the afterburner gate. Disengaging the afterburner meant pushing the gate keys behind the throttle, a procedure that the engineer was inexperienced with.

Hurtling down the runway at afterburner with no helmet, radio, or canopy, Holden only narrowly missed hitting a fuel tanker that was crossing the runway. As the Lightning crossed the main runway, Holden was overflown by a de Havilland Comet jetliner that was taking off. Running out of runway and unable to stop, Holden had no choice but to pull back on the stick and take the Lightning into the air.

After taking off, Holden located the gate keys and disengaged the Lightning’s afterburner. Although he considered ejecting, this was impossible with the plane’s ejection seat disarmed in ground mode. Forced to attempt a landing, Holden’s first two approaches were at the wrong speed and altitude and he aborted. He flew a wide circuit around the airfield and attempted a third landing in the opposite direction of the runway, away from the nearby village. Accustomed to flying taildragger aircraft, Holden’s landing altitude resulted in a tail strike, with the Lightning’s rudder tail bumper impacting the runway and breaking off. This also detached the cable of the drogue parachute used to slow the aircraft on landing. Still, Holden engaged the jet’s brakes and managed to stop just 100 yards from the end of the runway. His accidental flight lasted 12 minutes and, incredibly, resulted in no injuries or fatalities.

After Holden’s Lightning flight, XM.135 was repaired and returned to service. The supersonic aircraft flew a total of 1,343 hours, including Holden’s 12 minutes, before it was acquired by the Imperial War Museum Duxford in 1974 where it is on display. Holden remained in the RAF until retirement. He passed away in 2016 at the age of 90.