This is why China has declared war on organized religion 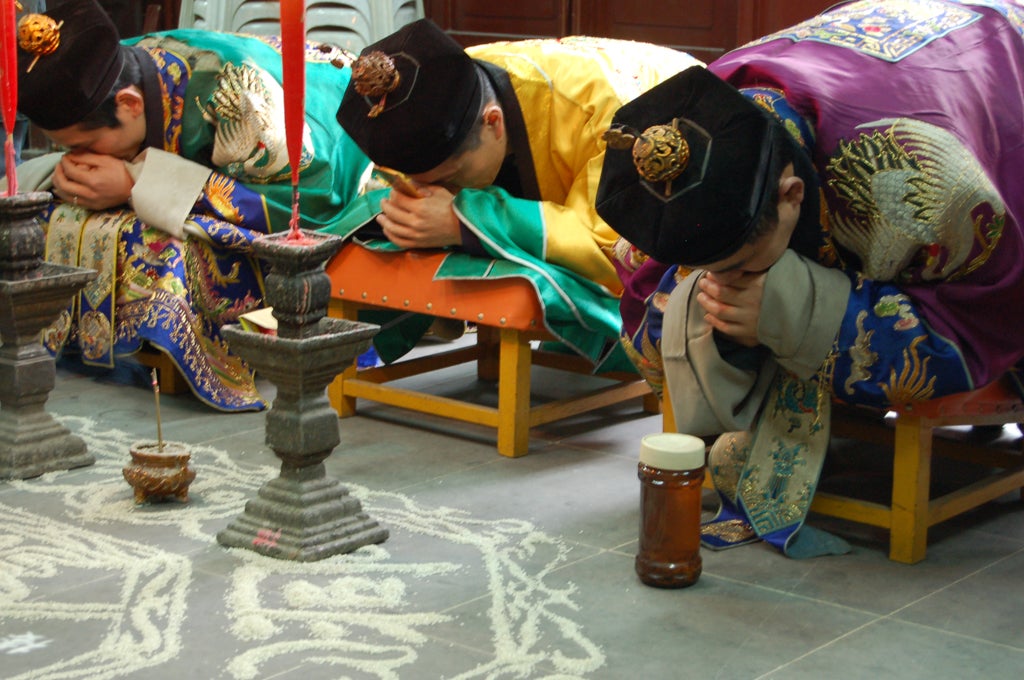 Priests of the Zhengyi order bowing while officiating a rite at the White Cloud Temple of Shanghai. (Wikipedia).

For the past year, China has imprisoned Muslims for displaying their faith, compelled Buddhists to vow devotion to the ruling coalition, and pressured Christian churches to remove their crosses. The unprecedented war on organized religion does not come as a surprise as China has been trying to eliminate religion for a long time. The ruling coalition party, which is ostensibly atheist, has for decades tried to influence religious organizations to maintain dominance. According to China’s State Administration for religious affairs, the Catholics, Protestants, Buddhists, Muslims and Taos have freedom of worship. Basically, these groups have freedom of operation so long as they are officially sanctioned by the government. In reality, anyone who believes in a higher power is considered an enemy of the Chinese Communist Party.

Although the constitution protects religious groups from violations, the presidency of Xi Jinping seems to have no respect for religion. Millions of Xinjiang residents who are mostly Muslim have been imprisoned by the state and others harassed by the massive police installed in the region recently. The detainees claim to have been imprisoned because they refused to abandon their Islam markers, such as refusing to drink and wearing a hijab. While Beijing reported having dealt with the matter and released the detainees, there is no evidence pertaining to their claim. In fact, the Chinese government is now accused of faking their situation on social media by forcing victims to give statements of their release. In practice, little has been done to ameliorate the situation in Xinjiang.

Similarly, organized religion is being intimidated by the government all over the country. More than 10 Halal restaurants have been forced to take down their Arabic scrips and symbols depicting Islam, claiming that it does not represent the Chinese culture. The communist party claims that it does not trust suspicious foreign forces in its state, therefore, interprets such symbols as non-allegiance. They want Islam and other religious groups to operate under the Chinese language, something that strips the whole meaning of the distinct religion.

The communist party has made sure children are not taught about their various religions from a young age. The children are only allowed to believe in communism and the ruling party. While the crackdown may seem to focus mainly on Islam, Christians have also been targeted in many ways. Catholics and Protestants have been threatened and harassed severally. Many Christians have reported burning of their Bibles, being forced to renounce their Christianity, and shutting down churches. The churches that have been allowed to operate must install facial recognition devices in their buildings lest they get closed. To make it worse, the communist party officials often add state propaganda to preacher’s sermons. Corrupting the word of God with the lies of communism.

Buddhism and Taoism, the most ancient religious groups of East Asia, are not lucky either. Believers from these religious groups have gone through agony during Xi Jinping’s Presidency. They have been limited from accessing some parts of the country, and some monks accused of terrorism for exercising their beliefs. The Shaolin Temple, among the most important Buddhist sanctuaries, hoisted the Chinese national flag recently. This is believed to be a part of the Chinese government’s campaign to force religious groups into allegiance.

The Communist Party seeks to maintain its grip on power and can only do so by dismantling organized religious groups that seem to undermine its authority. This might also be a well-orchestrated strategy to limit foreign influence among the Chinese as the government has always had a concern with the extent of foreign influence over religion. According to the Chinese government, foreign forces can use religious bodies to manipulate societal thoughts that may lead to chaos and havoc.