MIGHTY 25: Air Force Captain Oliver Parsons is saving lives, one game at a time - We Are The Mighty 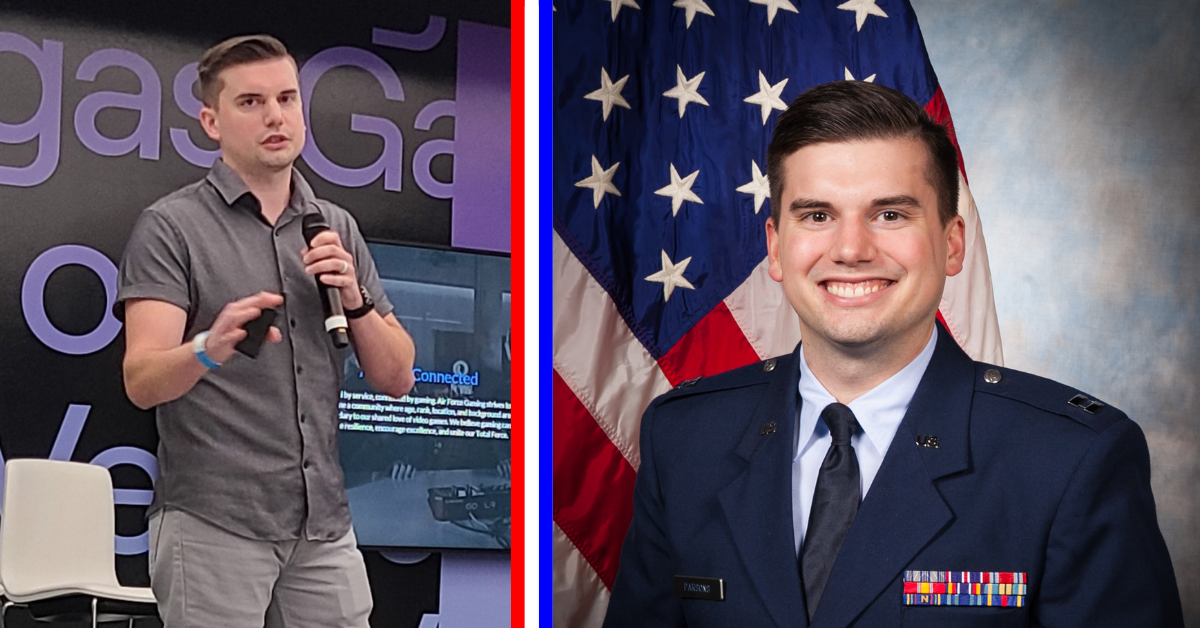 Though Air Force Captain Oliver Parsons always loved gaming, his original role within the service was in nuclear operations. A challenging season of his life led him to create an extraordinary program for airmen. It’s saving lives, one gamer at a time.

Parsons spent a lot of his growing years in Kansas City. A self-proclaimed “nerd” who enjoyed leading his high school student council and playing on the drumline, he wanted to get out of his hometown. ROTC seemed like the way to do it.

I got a scholarship to Oklahoma State and I ended up meeting my wife there. She was also a part of the ROTC program,” he shared. Upon graduation there was only one Air Force base they could both go to and it was all the way in North Dakota.

“The first few years were great as we met new people and experienced new things. But then my wife and I hit a really dark time in our lives,” Parsons shared. The minus 70 temperatures didn’t help, either.

Both began working 70-90 hours a week to distract themselves from the personal challenges they were facing. “I ended up getting diagnosed with severe depressive disorder, anxiety and ADHD. As a person who works in the nuclear ops career field, it’s almost looked down on when you get help,” Parsons said.

Despite the continued focus on resilience within the Air Force, he found himself struggling to not only get the help he needed but maintain the support without losing his role as an airman. This led Parsons to quitting all of his medications cold turkey.

Feeling down, he turned to video games as a way to escape the negativity he was feeling. It grew to include other friends and a community of airmen playing games to get through the harsh seasons.

They PCSed to California and Parsons took on a role teaching 2nd Lieutenants nuclear operations. “I thought I was going to be fine. I had started exercising and hiking again. But one time I sat and stared at the carpet for three hours without moving. It scared me,” Parsons admitted.

Recognizing he wasn’t feeling fulfilled or purpose driven, he began to look for meaning.

Through it all, gaming was a source of release from the struggles for him. In 2019, he and a fellow gaming friend had the idea to utilize the hobby they loved as a way to support mental health within the Air Force.

Seeing the Army utilize esports pushed him to pursue it for airman. “I emailed Maj. Gen. Leavitt, who was in charge of Recruiting Command at the time. After explaining the esports idea and what it could do, I sent it. Truthfully I didn’t expect a response but 13 minutes later I got one,” Parsons said.

She included her entire staff on the return email, too.

“Maj. Gen. Leavitt connected me with her innovation team. Then, me and a few other airmen all across the globe decided to see if we can do this as a recruiting type tool,” he explained. In a matter of days their membership grew to 2000 — it was working.

The challenges he faced to get to this point taught him a lot about himself, too. “I still have days where I can’t get out of my mind. No matter what it is someone’s going through, it could weigh more on them than it could on somebody else,” he said. “I didn’t realize early on, even though I was the student council president, I was introverted. I was putting on a mask of being an extrovert.”

There were still ongoing barriers or bad days but he’s meeting them head-on. Parsons shared a story of a female airman who revealed the esports initiative saved her life. He holds onto these testimonials. “It was those meaningful relationships which kept me going each and every day,” he admitted.

Soon, they’ll launch the esports platform for the Space Force and they’ve been supporting the Coast Guard as they’ve begun to create their own initiative in the gaming world.

Recently, Air Force Chief of Staff C.Q. Brown followed them on Twitter. It was a special moment which solidified the work they were doing to make a difference in the lives of Airmen across the globe.

Parsons is a force multiplier and though he’s humble regarding the power of his ideas, the undeniable impact is visible. It’s why he’s Mighty, too. To learn more about Air Force Gaming, click here.