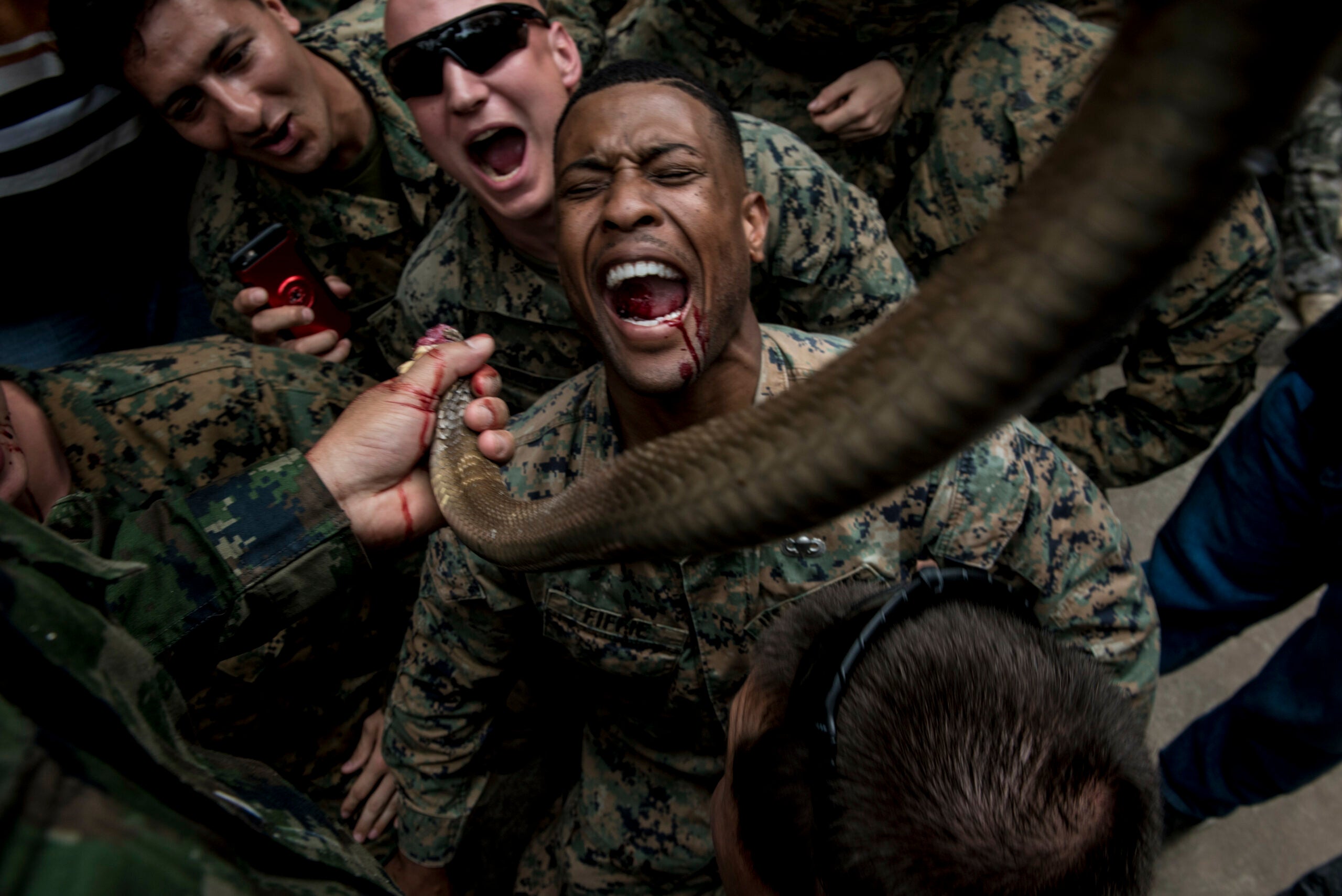 U.S. Marine Corps Sgt. Christopher Fiffie, a reconnaissance Marine from Edgard, La. assigned to 3rd Reconnaissance Battalion, 3rd Marine Division, drinks cobra blood during jungle survival training Feb. 19, 2018, in Sattahip, Chonburi province, Thailand. The training was conducted as part of Exercise Cobra Gold 2018. In a survival scenario snake blood can be consumed to keep an individual hydrated while the meat can be used as a source of nutrition. The annual exercise is conducted in the Kingdom of Thailand held from Feb. 13-23 with seven full participating nations. (U.S. Air Force photo by Staff Sgt. Micaiah Anthony).

This time, People for the Ethical Treatment of Animals, better known as PETA, didn’t have to create gruesome imagery of animals secretly being hurt or mistreated to get people’s attention. The Pentagon’s public affairs apparatus did it for them. And there’s nothing secret about it.

Every year, United States Marines and Thailand’s Marines take part in a blood-drinking ritual as part of the annual Cobra Gold joint training exercise. Thai troops conduct a ceremony in which a king cobra snake is beheaded and its blood is shared among the participants.

The photos prompted members of PETA to protest the treatment of king cobra snakes in front of Thailand’s embassy to the United States in Washington and in front of Defense Secretary Lloyd Austin’s house.

Drinking the cobra’s blood is more than just a source of cool photos of United States Marines, it’s taught to the Marines by the Thai armed forces as part of its jungle survival training. The blood of the cobra, they say, can be used as an alternate source of hydration when water isn’t available or isn’t clean enough for drinking.

PETA has been protesting the use of cobras (and geckos, chickens and insects) in the exercise ever since it discovered that the exercise existed. Cobra Gold is the largest military training exercise in Southeast Asia, and the joint U.S.-Thai exercise covers interoperability, disaster response and other military operations between the two countries.

The 39-year-old exercise is conducted in and around Thailand, but often has many other partners and observer nations. The coming exercise will include live-fire exercises, land-mine reduction, and other simulated war games.

It’s not just an important military exercise, it’s also a partnership-building exercise. Many different nations have joined Cobra Gold, either as participants or observers. China became an observer in 2015 and Burma joined the exercise for the first time in 2016.

But PETA isn’t targeting the exercise itself, just the part where the Thai soldiers tame, kill and drink the blood of a king cobra and other wild animals as part of the exercise. The organization calls it unnecessary, and a zoonotic disease vector “on par with COVID-19.”

PETA also has a problem with the way Marines and Thai troops are taught to kill the animals they eat for survival, claiming the method of killing chickens isn’t approved by the American Veterinary Medical Association, and that geckos should be killed by blunt force trauma, among other issues.

Photos of the Cobra Gold exercise and of United States Marines drinking cobra’s blood have been public since long before PETA first learned about the event in 2020. That seems to bother the organization just as much.

“The fact that the general public was able to see footage of our U.S. Marines taking part in something so cruel set this apart,” said PETA Associate Director Ashley Byrne, who may not have ever actually met a Marine. “I don’t think that this reflects the values that we want associated with our country.”

On top of the protests, PETA filed a petition for rulemaking with the Department of Defense to eliminate the unnecessary killing of animals as part of Cobra Gold. In the petition, the organization offers an alternative to Thailand’s jungle survival training, which includes “instructional books and videos created by former military survival instructors, interactive video programs, and a focus on non-animal sources of sustenance.”