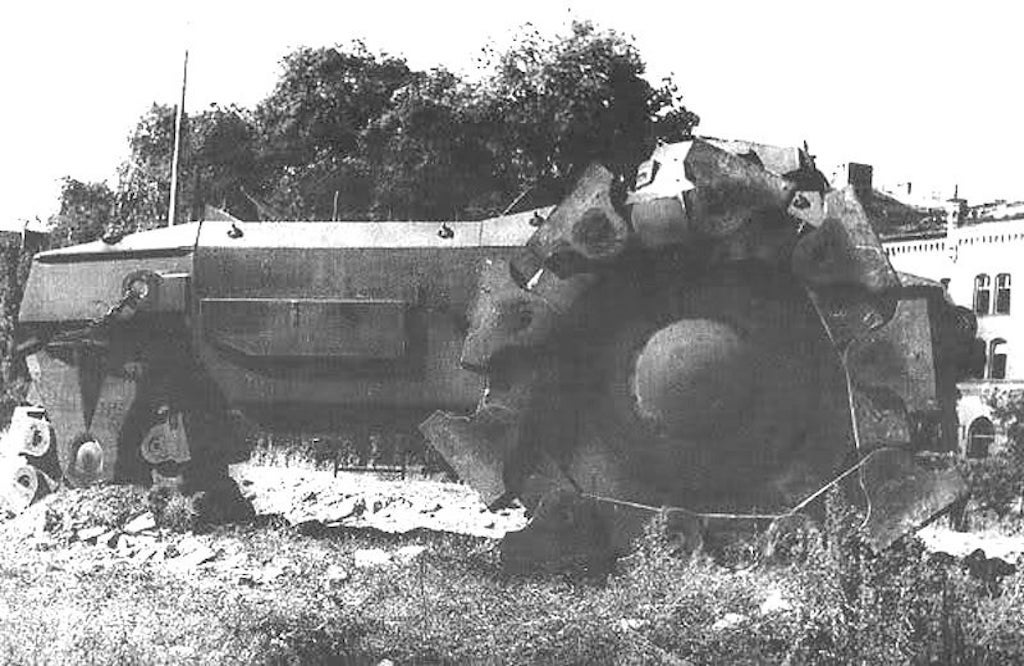 Land mines pose a serious threat to advancing ground forces. These buried explosive devices, capable of disabling even the most heavily armored vehicles, can block certain routes and funnel formations into kill zones. As a counter to land mines, the mine flail was invented during WWII. Mounted to the front of an armored vehicle, the flail utilizes heavy, spinning chains to strike and detonate mines ahead of the clearance vehicle. While the mine flail was used with great success by the allies, the Germans looked into another solution to the land mine problem.

Rather than using a rotating flail in front of an armored vehicle, the Germans tried to clear buried land mines with the armored vehicle itself. In 1942, the VsKfz 617 Schwere Minenräumer (NK-101) was built. A joint project between the German companies Alkett, Krupp, and Daimler-Benz, the Minenräumer was designed to clear land mines by simply running them over and detonating them itself. Measuring 20.6 ft long, 10.6 ft wide, and 9.5 ft tall, it was a rather large vehicle.

Sitting on three wheels, the Minenräumer was visually similar to a tractor. Although power was sent to the set of two wheels for drive while the third wheel controlled steering, the Minenräumer’s set of two wheels were actually at the front of the vehicle. Each wheel was surrounded by 10 links which retained 10 heavy shoes. These massive shoes walked forward as the Minenräumer’s wheels rotated, and were designed to withstand the blast of a land mine. However, the shoes were held in by large pins and could be easily replaced if they were damaged.

In addition to its distinct shoed wheels, the Minenräumer itself was designed to survive rolling over a land mine. The vehicle’s body rode high off the ground, giving it one meter of ground clearance and providing more distance from explosions below. Its hull was also V-shaped to deflect the upward blast of a buried land mine. Finally, the Minenräumer’s underside was protected by a double layer of armor, one 20mm thick and the other 40mm thick. As a mine clearance vehicle and not a combat vehicle, this amount of armor was deemed sufficient from the Minenräumer.

In addition to its armor and heavy duty shoes, the Minenräumer mounted the turret from a Panzer I. The turret was equipped with two 7.92mm MG 34 machine guns to defend the vehicle against enemy infantry. Production variants were slated to be upgraded with a Panzer II turret armed with one MG34 and a 20mm auto cannon, but this was variant was never built. Two men crewed the Minenräumer. The driver sat on the left side of the fighting compartment and looked through a slit in the front of the armored hull. Meanwhile, the commander sat on the right and controlled the turret.

Testing on the Minenräumer concluded in 1942 and found it to be unsatisfactory. Mobility was restricted by its 50-ton weight and Maybach V12 engine that produced just 300hp. While it didn’t need to be highly mobile, the Minenräumer had an off-road top speed of just 2.4mph, too slow to keep up with even dismounted infantry. Moreover, steering was difficult in any type of adverse terrain. This was compounded by the vehicle’s weight which caused it to get bogged down and made both speed and steering worse.

Only one Minenräumer was produced before the project was canceled. In 1945, this prototype was captured by the Soviet Union during the Red Army’s advance through Germany. It was taken back to Moscow where it was inspected and tested in early 1947. Unsurprisingly, the Soviets came to the same conclusions that the Germans did and relegated the odd mine clearer to the Kubinka Tank Museum where it remains on display.