Why German vehicles had textured camouflage during WWII 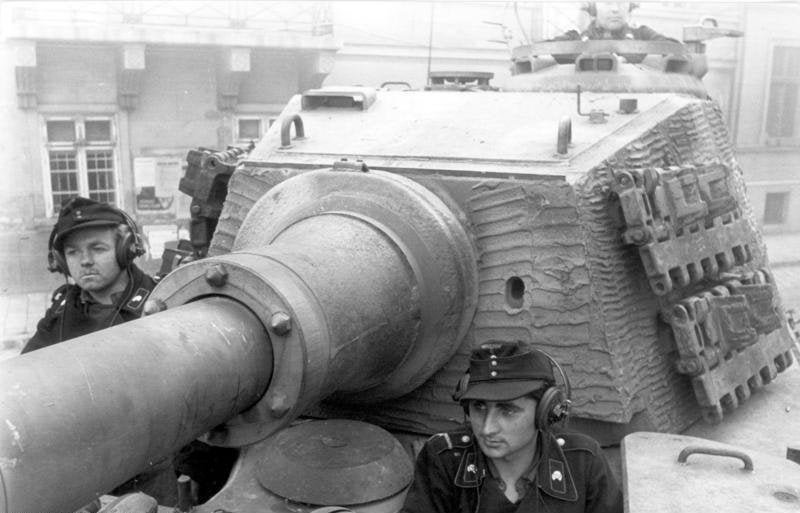 Keen-eyed history enthusiasts may notice a textured, striped camouflage on German WWII vehicles. In fact, the distinctive visual can be used to identify a WWII vehicle as German. But what is this appliqué and why did only the Germans use it? Moreover, why did the Germans eventually stop using it?

In November 1942, Germany brought the Hafthohlladung into service. Meaning adhesive hollow charge, it was also known as the Panzerknacker or tank breaker. It was a magnetic shaped charge that could be attached to the hull of an enemy tank by infantry anti-tank squads. The Hafthohlladung was capable of penetrating 140mm of rolled homogeneous armor, greater than the thickness of most Allied tank hulls.

With such a deadly weapon in their arsenal, the Germans feared that the allies would develop their own magnetic anti-tank device. Anticipating this, the chemical company Chemische Werke Zimmer & Co was brought in to develop an anti-magnetic coating to protect German vehicles from such devices. The resulting product was called Zimmerit.

Zimmerit was a paste-like, non-magnetic coating that prevented the adherence of a magnetic device to a vehicle. It was made of 40% barium sulfate, 25% polyvinyl acetate, 15% pigment, 10% zinc sulfide and 10% sawdust. In addition to its anti-magnetic properties, Zimmerit was applied in a textured pattern that further reduced the ability of magnets to stick and served as a sort of camouflage.

Zimmerit was first applied to vehicles during factory production in December 1943. However, it was also issued to operational units to apply to vehicles in the field. The first layer of the paste was applied and given 24 hours to dry before the second layer was applied. Before it could dry, the second layer was raked to create the textured pattern. Factory application allowed for more time-intensive patterns like squares of waffles.

Zimmerit was applied primarily to tanks and casemate tank destroyers and self-propelled guns. It was rarely applied to open-top vehicles. Tanks that received Zimmerit coating include the Panzer III, Panzer IV, Panther, Tiger and even early models of the Tiger II. Although guidance initially called for only the hull of a tank to be coated with Zimmerit, it was later applied to the turret as well.

German fears of the Allies developing a magnetic anti-tank device like the Hafthohlladung never manifested. Moreover, the use of high-explosive anti-tank projectiles like the Bazooka made such devices obsolete. Finally, unfounded rumors spread amongst German vehicle crews that Zimmerit would catch fire when hit. All of these factors led to the discontinuation of factory Zimmerit application on September 9, 1944 and field application on October 7, 1944.