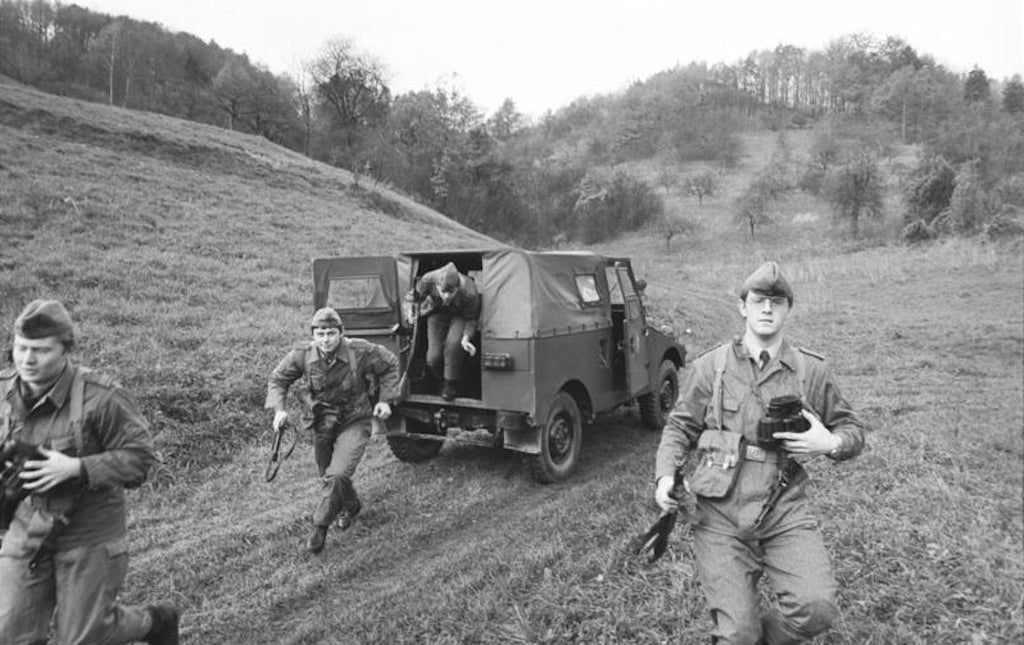 Grenztruppen during an exercise near Mühlhausen on March 27, 1982.

In 1998, German police officers found the body of a taxi cab operator and father of five named Hans Pluchke in the town of Wiesenfeld. He had been shot through the head above his right eye. His wallet and keys were left untouched, so robbery was ruled out as a motive. The only possible suspects left were the members of the Stasi, the former East German secret police.

Until 1970, Plutchke had been a senior hunter in West Germany’s elite Federal Border Guard. He spent much of the 1960s patrolling the critically important Fulda Gap, where World War III was expected to begin between East and West. It was in this area of Germany where Plutchke sealed his fate in 1962.

Plutchke was on border patrol duty in August 1962, watching East German pioneers construct border walls in the Fulda Gap. The East German guards knew they were being watched by everyone from the West German Federal Border Guard to the U.S. Army.

In command of the East Germans was Capt. Rudi Arnstadt. Arnstadt and his GDR (East German) troops were on hand to make sure none of the troops or pioneers deserted across the border. As Plutchke and his partner walked along the tense border on August 14, 1962, a shot rang out.

Everyone was alerted. Arnstadt jumped up and drew his pistol, aiming it at the West German border guards and firing a shot. Pluchke’s partner fell to the ground. Without thinking, Plutchke unslung his FN rifle and fired an unaimed shot from his hip, hitting Arnstadt above his right eye. Both sides dove for cover as a gunfight broke out.

After the incident, police forces from both sides descended on Fulda, but the East German police refused to cooperate with the West Germans. The question was, had the West German patrol walked into East Germany? If they had, then Arnstadt was right to fire his weapon. West German investigators concluded they hadn’t and the case was dropped.

The East Germans conceded that they had fired first, but it wasn’t Arnstadt, it was his escort that took the first shot, which was meant to be a warning. The GDR claimed the West German border guards were drunk and hurling hate speech at Arnstadt and his men. They also claimed the West Germans were at company strength and had violated the border numerous times. Arnstadt, in their view, tried to talk to the Western border guard before being gunned down.

Arnstadt’s death was declared a murder in East Germany and Arnstadt himself became a national martyr. Almost immediately, East Germans began calling for justice against the man that shot Rudi Arstadt. Hans Pluchke never revealed his name or his role in the shooting incident. In 1970, he left federal service and started a taxi company in nearby Hünfeld.

Despite leaving the military behind, he could never sit easily knowing so many people were out for his blood. He believed that keeping his identity a secret from the Stasi was impossible and carried a weapon on him at all times, even for years after becoming a civilian.

When East and West Germany reunited in 1990, Pluchke worried that he had been tried in absentia for the killing in East Germany but found there was no real case against him. In 1993, he admitted to being the shooter of Rudi Arnstadt on a German television show, “Explosiv – Das Magazin.”

The show didn’t mention that West German courts absolved him and ruled the killing self-defense, painting him as a murderer. He sued the show. It prompted a brief reopening of the case when former Stasi and East German police officers offered testimony, but the original 1962 ruling stood: Pluchke shot Arnstadt in self-defense.

That’s how it was left until March 15, 1998, when Pluchke’s body was found near Wiesenfeld, with a bullet hole in his head, identical to the wound that killed Arnstadt. The story led many to wonder if former members of the East German Stasi had taken revenge for Arnstadt’s death.