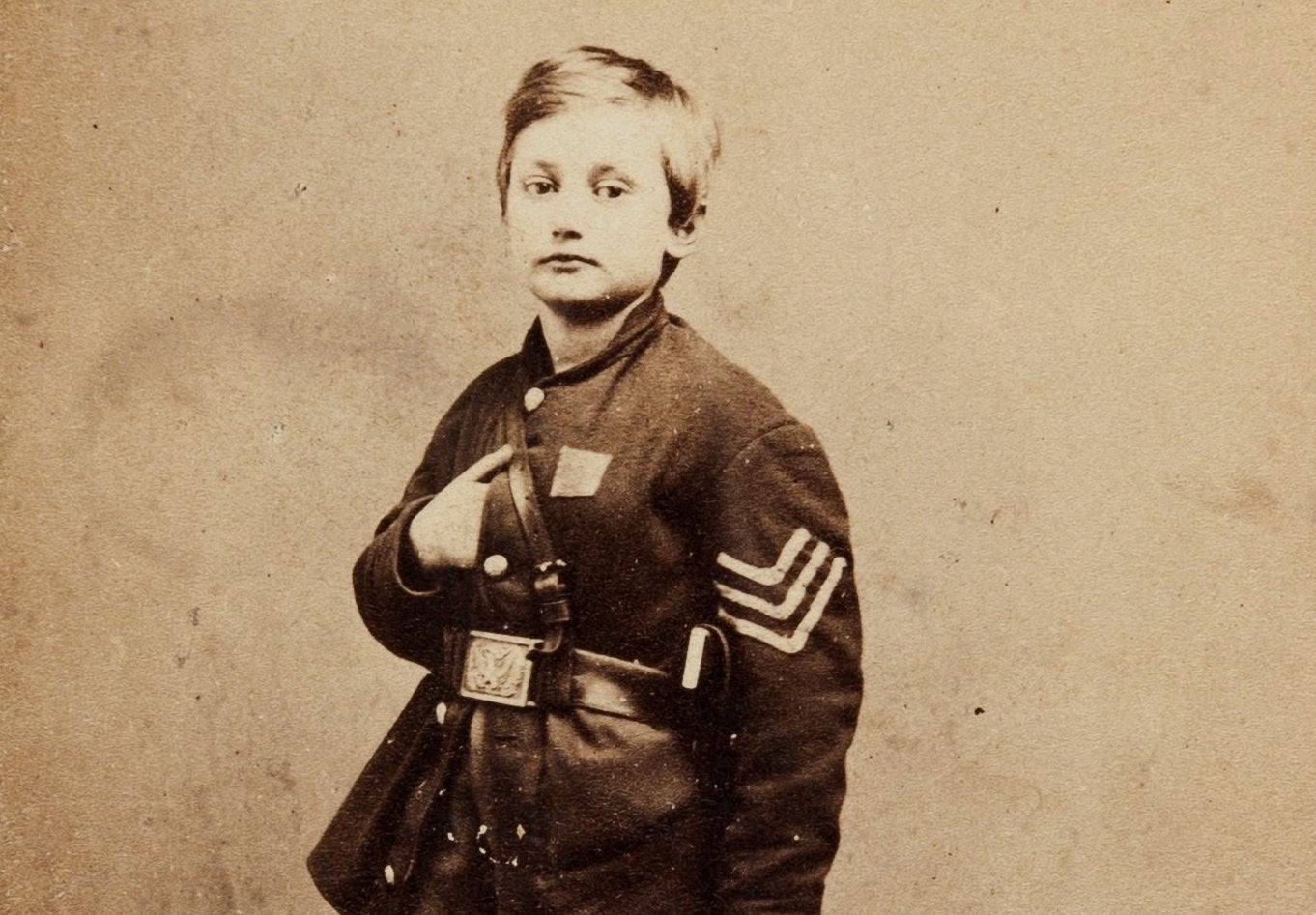 Ohio native John Clem might have been small in stature, but he was big of heart. After running away from home following the death of his mother in 1861, he tried and tried again to join the Union Army as a drummer boy. He was rejected because he was only nine years old — and looked like it.

Persistence eventually paid off, though. Even after the 22nd Michigan Infantry rejected the boy, he followed the unit wherever it went, and they eventually accepted him. The officers of the infantry unit all chipped in to pay him his regular salary until he was old enough to officially enlist.

Although there are claims he fought at the Battle of Shiloh, Johnny Clem’s first documented battle of the Civil War placed him at the epic Battle of Chickamauga in Walker County, Georgia. This would make him a veteran at just 12 years old. Contemporaries say he used a musket that was trimmed down to a size he could effectively use on the battlefield – and use he did.

Chickamauga did not go well for the Union Army. The battle saw the second-highest number of casualties inflicted of the whole war, second only to the Battle of Gettysburg. As the Union forces retreated, Clem was confronted by a Confederate colonel who demanded his surrender. Instead, the young Clem shot the enemy officer.

After the fighting, Clem was promoted to sergeant, becoming the youngest non-commissioned officer to ever serve in the U.S. Army. Clem was captured by a Confederate patrol later that year. The men confiscated his Union uniform and used him as propaganda, claiming the Union was so hard-pressed for men that they had to put uniforms on children.

Sgt. Clem was exchanged in 1863, in time to see more action with the Army of the Cumberland. He would be discharged in 1864, after being wounded in combat on two occasions. After the war, he finished high school and rejoined the Army. He attempted but failed to get into West Point but his service caught the attention of then-President Ulysses S. Grant, who gave Clem, now an adult, a commission in 1874.

2nd Lt. Clem initially went to the Army Artillery School but transferred to the Quartermaster Corps, where he spent the rest of his Army career. He was routinely promoted and was still in the service when the Spanish-American War broke out in 1898. He deployed to Puerto Rico to serve as quartermaster in occupied San Juan.

By 1906, he was Col. John Clem, serving as chief quartermaster at Fort Sam Houston in Texas. At age 64 in 1915, he was finally forced to retire. At this time it was custom for Civil War veterans who reached the rank of colonel to be promoted to brigadier general, so John Clem, the 9-year-old boy who forced the Union Army to take him as a drummer boy during the Civil War, retired as Brig. Gen. Clem.

He was the last Civil War veteran to retire from Army service. In recognition of that fact, he was promoted once more in 1916 to major general. He lived to see the United States join World War I but not World War II. He died in 1937 at age 85.