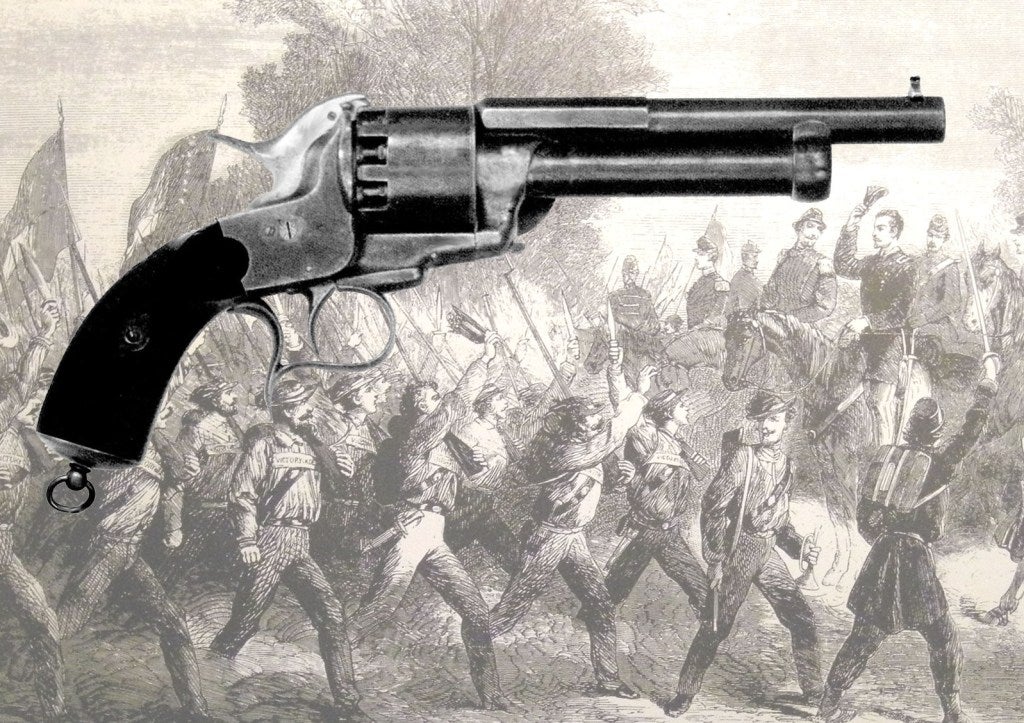 After seceding from the Union, the Confederacy wasn’t really known for much other than slavery, a slow decline, and getting half of their country burned down. There wasn’t much produced by the Confederate States of America, other than a lot of agricultural products, but they did have one product unique to the CSA.

The signature sidearm, carried by officers in the Confederate Army and Navy, was a two-barreled weapon that carried both large caliber ball shot in one barrel and, with a simple movement, could fire 20-gauge buckshot from the other.

The LeMat Revolver or as it was called later, the Grape Shot Revolver, was designed in New Orleans by Jean Alexandre LeMat and built in France. Backed financially by then-Maj. P.G.T. Beauregard, LeMat hoped his weapon would be marketed to the U.S. Army for use in dragoons and mounted soldiers.

It was not to be. Shortly after LeMat began to aggressively market the weapon to the U.S. Army, states began to secede from the Union and Army officers began to defect to the new Confederate States Army. Beauregard was among the first to resign from the Army and switch to the south.

Luckily for LeMat, Beauregard held a lot more sway in the Confederate States Army than his did with the Union Army and the Confederacy soon ordered 5,000 of the new revolver for its officers and navy. Being made in Belgium and France, the weapon had to be run through the Union blockade, which means the CSA only received about half the pistols they ordered.

Along with Beauregard, it was fielded by other famous Confederate figures, including Gen. Braxton Bragg and J.E.B. Stuart. The weapon itself wasn’t very accurate, but it could be effective at close range.

The LeMat Revolver is a nine-shot cylinder, smoothbore weapon with another, centered barrel that also fires as a short-barreled shotgun. A lever on the end of the hammer switched between the revolver and shotgun barrels. In the standard position, it fired like any other revolver, but with the lever up, it fired a deadly volley of 20-gauge shotgun pellets, hence the nickname, Grape Shot Revolver.

It sounds great for any cavalry officer to include his stash of pistols to be used in combat, but there were some significant disadvantages to the weapon. The original caliber round couldn’t be purchased at general store, because it was a nonstandard size, so owners of the pistol often had to cast their own bullets.

When new versions were created to use standard ammunition, and later to use cartridge ammunition, these versions of the LeMat were hard to find due to the tightening of the Union blockade as the Civil War dragged on and supplies dwindled. The fans of the LeMat were dedicated, though and kept them close. They were only used in service to the Confederates in the United States and production of the weapon ended in 1865.

Some of the newer LeMat revolvers that didn’t make it to the American Civil War were used in Europe in later wars. The French government adopted the LeMat Revolver during the Franco-Prussian War of 1870. The French had as much luck against the Prussians as the Confederates did against the Union, losing the war quickly – although it’s unlikely that one pistol was at fault for both losses.