This is the distinguished service of Little Green Army Men toys 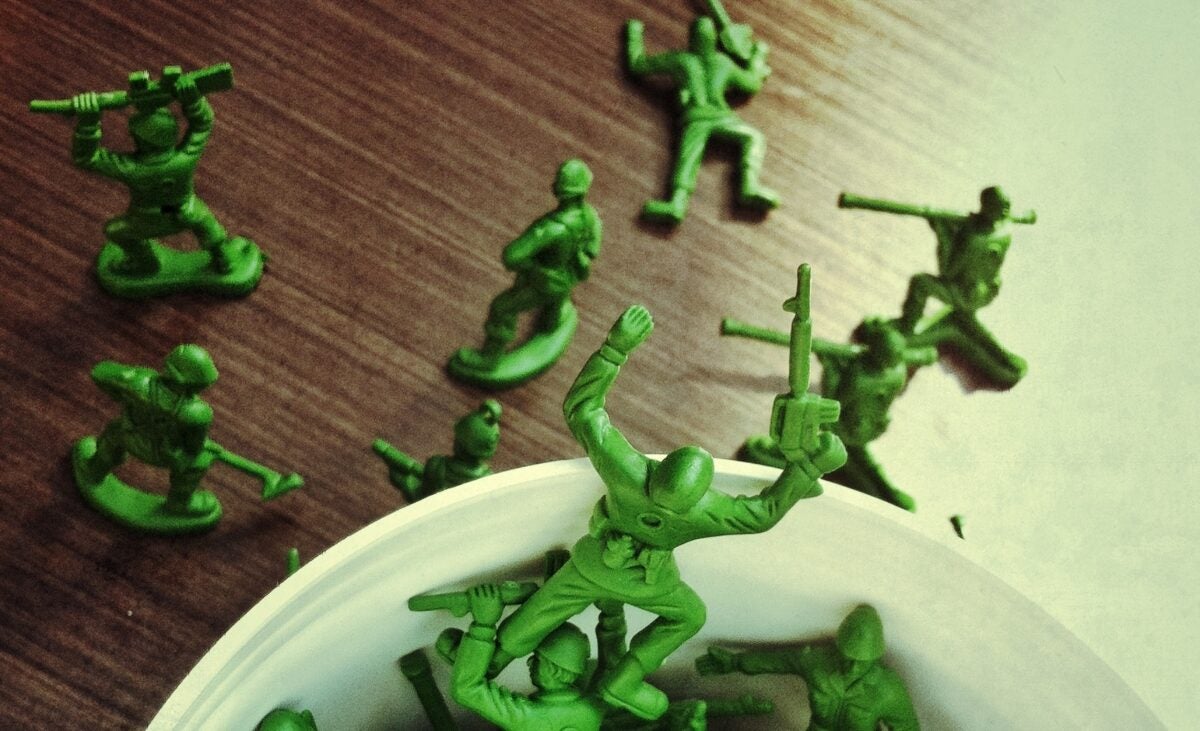 The Little Green Army Men toys we all know and love have a long tradition stemming since the 1930s. In 2014, the toys were inducted into the National Toy Hall of Fame for their service on the imaginary battlefields. The Army Men have also deployed to theaters all around the world – movie theaters, that is. From cameos in Disney movies to their own video game franchise, this is the history of the Army Men toys that captured our imaginations as children.

Originally made of lead

Manufactured by Bergen Toy and Novelty Co. in 1938 in various poses depicting the combat roles of mid-20th century soldiers, they took backyards by storm. One could buy hundreds of the mass-produced troops sold in supermarkets, department stores or by mail-order. Before the widely adopted plastic, Army Men toys could also be found made of glue and sawdust called simply “composition” and were unpainted. By the 1950s the cost of producing them in plastic drastically decreased to pennies per unit in bulk. Additionally, the lead poisoning scare of the ’60s made companies quickly shift to non-toxic plastic in 1966.

German troops were molded in grey, Japanese forces in yellow. Though the little warriors have undergone several changes over the years, their most famous identity is as World War II–era soldiers with “pod feet” attached to keep them standing during battle.

The competitor to Bergen Toy and Novelty Co. was Marx Toy Company. They had a different strategy when it came to own plastic legions. They leaned on the appeal of making movie-themed sets such as Ben-Hur, The Alamo, The Untouchables, The Guns of Navarone and Tom Corbett, Space Cadet. Marx Toy Co. experimented with historically themed sets and also expanded their distribution through Sears catalogs. When we thought the Little Green Army Men were fighting a war, there were two brands actually doing it.

By the mid-1960s and 1970s, there were a plethora of competitors waging for market share. William Britains, Timpo, Cresent and Cherliea’s profits took a hit when lead was banned. The war in Vietnam was in full swing and public opinion was another major blow to the toy companies’ bottom line. After 20 years, the original toy maker, Bergen Toy and Novelty Co., sold its molds to Banner Plastics in 1958 and shut down. Banner Plastics went bankrupt in 1965 but was able to fight its way out of bankruptcy long enough to be sold to Tal-Corp, a Minnesota based company in 1967.

In 1980, they started putting them in buckets, which were very popular and became so iconic they were used in the movie Toy Story.

They have their own subreddit

The Green Dawn is a subreddit where people show off their Little Green Army Men Toys in battles. There is even a running joke that posts have to be made using radio jargon. If you reply to a post, you have to say “over,” too. A nod the community does to itself is that they hide the plastic figures in places for others to find.

They have their own shows at Disney theme parks

The Army Men toys can be seen entertaining crowds before live shows or patrolling the park complete with a drum line.

Army Men video games have had a range of developers ranging from major studios such as the now-closed 3DO to independent developers on the Steam platform.