Top cinematographers with military service - We Are The Mighty 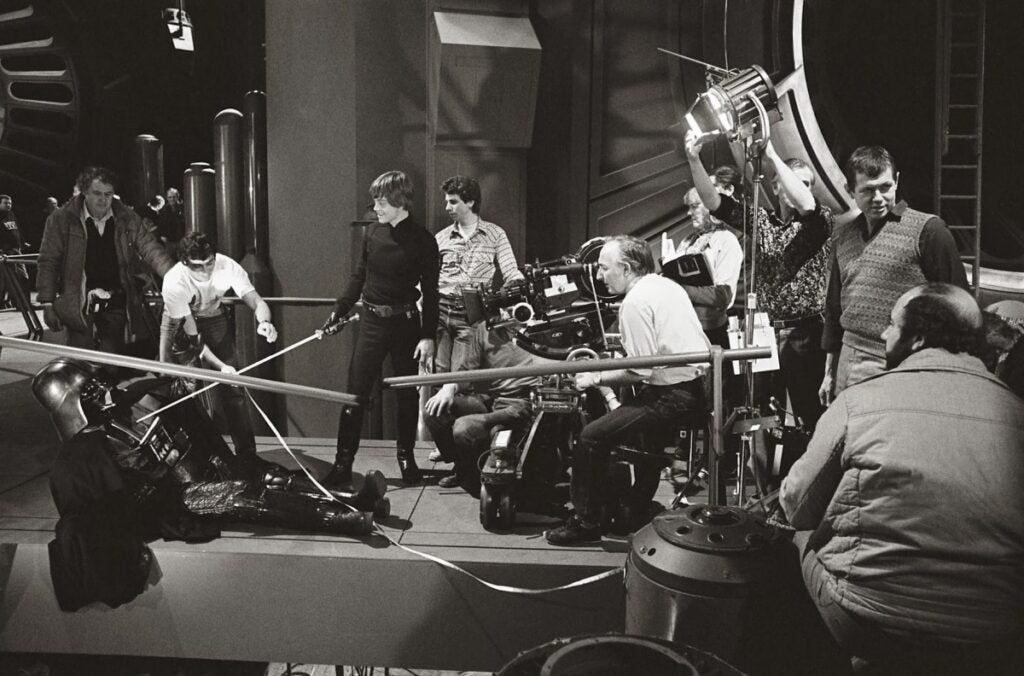 Cinematographers deserve more credit and recognition, especially from audience members that fall in love with their camera work and/or lighting, yet do not understand what exactly it is that they (Directors of Photography, aka DP) do on set. Here is a list of some of the greatest DPs of all time, likely influenced by their military service and experience with their creative choices:

Gilbert Taylor spent his professional career as a cinematographer for some of the greatest films of all time including Dr. Strangelove, A Hard Day’s Night, The Omen, Flash Gordon (yes that one) and Star Wars. His seminal and most commercial work was for George Lucas and his space opera. Star Wars encapsulated so many things, however, the camera work and capture of so many difficult scenes and special effects give credence to Taylor being at number one on the list.

Taylor told Mark Newbold in 2005, “I wanted to give Star Wars a unique visual style that would distinguish it from other films in the science fiction genre. I wanted Star Wars to have clarity because I think space isn’t out of focus, also I was mindful that there was an enormous amount of process work to be done in America with Dykstra after we had finished shooting in England, and a crisp result would help this process”.

Taylor spent six years in the Royal Air Force Volunteer Reserve as an operational cameraman aboard Avro Lancaster bombers. His job was to document the damage post a bombing mission. Per his interview with Mark Newbold, he says this of his wartime footage, “This was requested by Winston Churchill, and my material was delivered to 10 Downing Street for him to view. He was keen for the public to see what our lads were doing. I did 10 of those operations, including raids on Cologne and Dresden”.

Koenkamp went from being a DP on the TV show The Lieutenant, an early Gene Roddenberry show about a Marine lieutenant stationed at Camp Pendleton, to working for some of the best filmmakers of all time. His credits TV credits include The Man from U.N.C.L.E., The Outer Limits, Mission: Impossible and Kung-Fu. His film credits, one of which he won the Oscar for include Patton (nominated), Papillion and The Towering Inferno (won with Joseph Biroc).

Koenkamp enlisted in US Navy when World War II broke out and served for over three years in the South Pacific.

Biroc’s career began in the 1920s and he worked as an assistant cameraman for DPs. He is noteworthy for his cinematography work on It’s A Wonderful Life, Hush…Hush, Sweet Charlotte (Oscar-nominated), Flight of the Phoenix, The Longest Yard, Airplane! and The Towering Inferno (won the Oscar with Fred J. Koenkamp). His TV credits include the Adventures of Superman, The Man from U.N.C.L.E., and Dick Tracy.

He began his career as a motion picture cameraman for the U.S. Army Signal Corps in World War II. During his service, he filmed the horrors of the Dachau concentration camp and the liberation of Paris in 1944. He served as a captain for George Stevens, an Oscar-winning director and veteran, and his Special Motion Picture Coverage Unit throughout the war. He earned the rank of Major by the war’s end.

Hume started his career in the early 1940s and then served for the Royal Navy and Fleet Air Arm during World War II. Upon his return, he started working in British Films as a camera operator on such films as Great Expectations for David Lean. He moved over to the Carry On series of British films and eventually found great success as a cinematographer on such films as For Your Eyes Only, Return of the Jedi, Octopussy, A View to a Kill and A Fish Called Wanda.

Andrew Laszlo lived many lifetimes during his time here. During World War II, his family initially lived in Hungary and Laszlo was put into the Auschwitz concentration camp with most of his family. He was moved to multiple camps and was put to work laying railroad tracks. He was then moved to the Bergen Belsen concentration camp after an air raid on his previous labor camp. He lived months of starvation, extreme cold, beatings and all the other atrocities involved with being in a concentration camp. As the war was nearing an end he was shipped to yet another concentration camp in Theresienstadt and was stricken with typhoid fever. He reunited with his father in the camp. They were liberated on May 8th, 1945, by Soviet troops and returned to Hungary. He then immigrated to the U.S. via an uncle George Laszlo and began his career.

Laszlo is quoted from the documentary Cinematographer’s Style:

…Then the greatest break of my life came. I was the number one person from New York City to be drafted by the army for the Korean War. I wound up in the U.S. Army motion picture school, which was wonderful. We not only had all the equipment, the school insisted we shoot 35mm motion picture film, day-in and day-out, thousands of feet and, of course, doing it is the greatest way to learn.

When I came out of the Army it was a little bit rough. I was a young fellow, trying to enter the industry, which was very difficult because I had no track record. I tried absolutely everything to get work. In fact, I resorted to gags that nowadays I’m actually a bit self-conscious to talk about. I was turned down by so many producers, even smalltime ones; I couldn’t even get past secretaries. At one point, I sent out hand-printed résumés on sandpaper just so they would remember it. I sent out résumés on shirt cardboard so they couldn’t crumple it up and toss it in the wastebasket. The breaks finally came. I took any job offered to me, as long as I had a chance to be behind a camera, do some lighting, experiment with lenses and so on. Then better jobs were offered and that is how I got started. As I said earlier, the important thing is to stick with it.

His films include The Warriors, Southern Comfort, First Blood, Poltergeist II: The Other Side and Star Trek V: The Final Frontier. His TV work includes the great Shogun miniseries.

Slocombe worked as a photographer in his early in his career and was in Warsaw the night that Germany invaded during World War II. He escaped back home to England and began work as a cinematographer for the Ministry of Information shooting footage of convoys on the Atlantic for the Fleet Air Arm. Post the war he began work as a cinematographer and his career took off! His films include The Lion in Winter, The Great Gatsby, Jesus Christ Superstar, Rollerball, Raiders of the Lost Ark, Indiana Jones and The Temple of Doom and Indiana Jones and The Last Crusade.