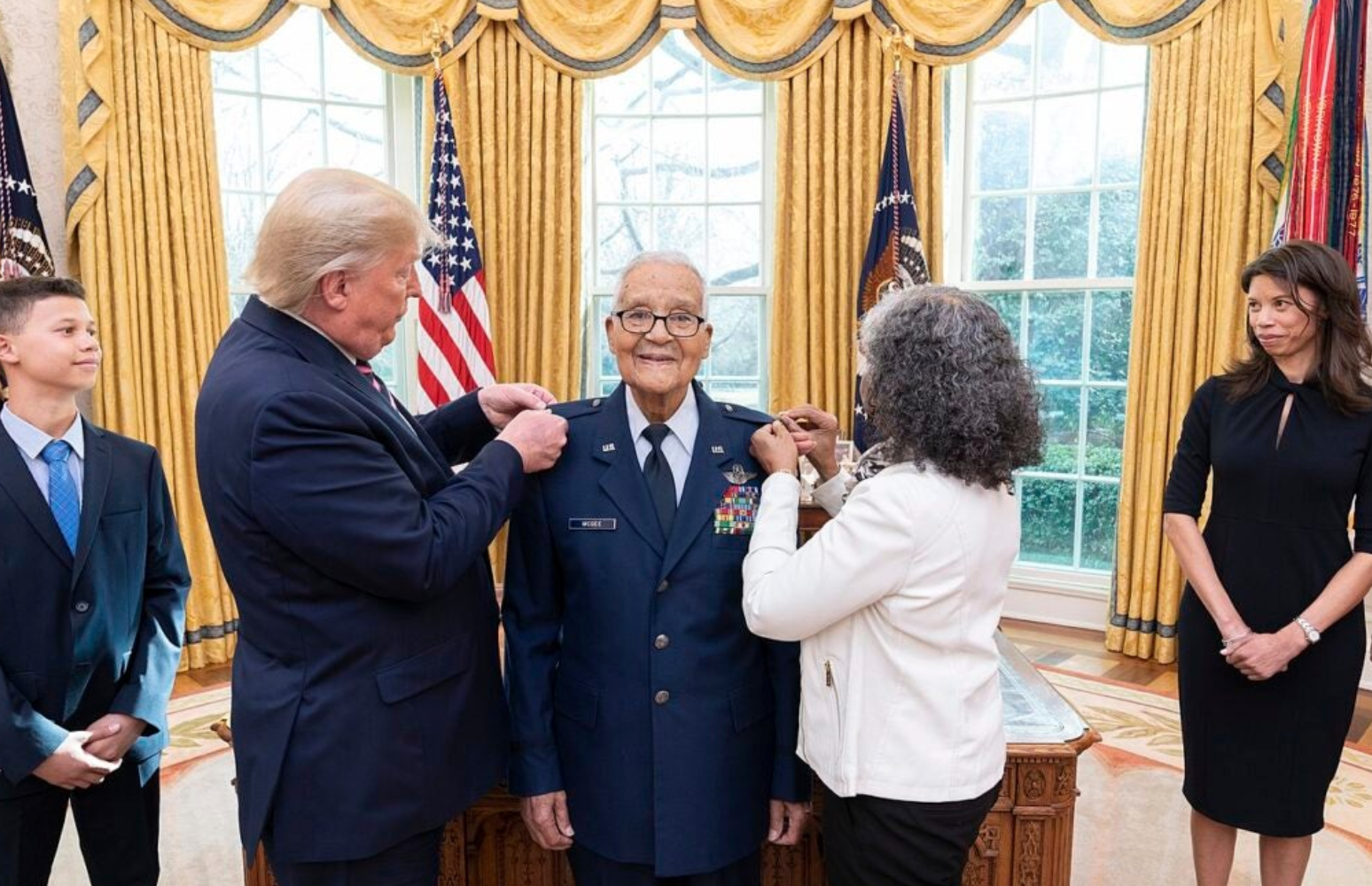 Brig. Gen. Charles Edward McGee was one of the most decorated and last surviving members of the pioneering all African American Tuskegee Airmen. On January 16, 2022, McGee died at the age of 102.

McGee was born on December 7, 1919 in Cleveland, Ohio. His grandfather was a former slave and his father served as an Army chaplain during WWI and at the Battle of the Bulge during WWII. McGee would follow his father into the military during WWII.

In 1942, McGee was a sophomore engineering student at the University of Illinois where he was also a member of the military drill organization the National Society of Pershing Rifles. He enlisted in the Army on October 26. Having already earned his pilot’s wings, McGee went through Army flight training at Tuskegee Air Field, Alabama. The trailblazing African American pilots who trained there became known as the Tuskegee Airmen. McGee graduated from class 43-F on June 30, 1943.

By February 1944, McGee was stationed in Italy with the 302nd Fighter Squadron of the 332d Fighter Group. His flew his first combat mission on Valentine’s Day. In Europe, McGee flew the P-39 Airacobra, the P-47 Thunderbolt, and the P-51 Mustang. His missions consisted primarily of escorting allied bombers over Germany, Austria, and the Balkans. When target presented themselves, McGee and other fighter escorts engaged ground targets in low-level strafing runs on enemy airfields and rail yards.

On August 23, 1944, McGee was part of an escort for a flight of B-17 Flying Fortresses over Czechoslovakia. During the mission, he engaged a formation of Luftwaffe fighters and scored a kill on a Focke-Wulf Fw 190. McGee rose to the rank of Captain and accumulated a total of 137 combat missions before he returned to the United States on December 1, 1944. He served the rest of the war as an instructor for B-25 Mitchell bomber pilots and remained at Tuskegee Air Field until its closure in 1946.

After WWII, McGee made the transition from the Army to the newly formed Air Force. He continued serving as a fighter pilot and became qualified on the F-80 Shooting Star and the F-89 Scorpion. However, during the Korean War, McGee flew the P-51 again with the 67th Fighter Bomber Squadron. He completed another 100 combat missions and was promoted to Major.

By the Vietnam War, McGee reached the rank of Lt. Col. and was still flying. During the war, he flew 172 combat missions in the RF-4, a photo-reconnaissance version of the F-4 Phantom fighter jet. McGee also commanded the 16th Tactical Reconnaissance Squadron, 460th Tactical Reconnaissance Wing at Tan Son Nhut Air Base in South Vietnam. After 30 years and three wars, McGee completed a total of 409 combat missions, one of the highest of any Air Force fighter pilot.

McGee was promoted to Colonel and served until his retirement on January 31, 1973. He ended his military career with a total of 6,308 flight hours. After leaving service, McGee went back to school. In 1978, at the age of 58, he completed his college degree at Columbia College. Despite his successful military career, earning his college degree had been a lifelong goal for McGee. He served as the director of the Kansas City Airport and as a member of the Aviation Advisory Commission. Moreover, he was an ambassador of the Tuskegee Airmen, Inc.

As one of the most decorated Tuskegee Airmen, McGee served as a consultant on the 2012 film Red Tails. On February 2, 2020, McGee presented the coin for the Super Bowl LIV coin flip with three other centenarian WWII veterans. Two days later, he was honored by President Trump at the 2020 State of the Union Address with a promotion to Brigadier General. McGee earned the Legion of Merit with oak leaf cluster, the Distinguished Flying Cross with two oak leaf clusters, the Bronze Star, and the Air Medal with 25 oak leaf clusters among other military awards and decorations. He was also awarded the Congressional Gold Medal along with all other living and deceased Tuskegee Airmen and was inducted into the National Aviation Hall of Fame.