Why this veteran soldier is proud to be a Hood Neck 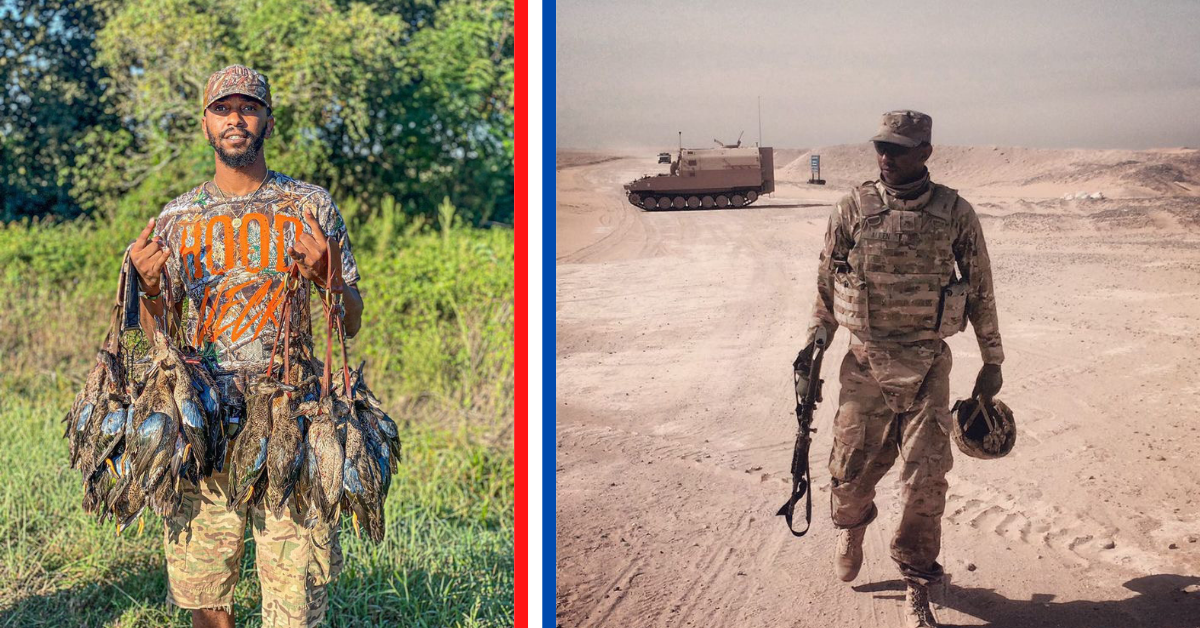 Chris Allen was calling himself a “Hood Neck” long before putting on his Army uniform. But it would be his time in service which would instill his deep love of shooting, hunting and being outside while still maintaining his pride for coming from the hood, too.

“One day my grandfather, who served in 12 Bravo, pulled me aside telling me he really thought I should enlist,” he said. College wasn’t going as planned and he and his friends decided to take the ASVAB and join together. “I passed the first time and it completely changed our lives.”

Not long after boot camp and training he was deployed to Kuwait.

Though he would be medically retired from 13 Bravo and the artillery after four years of serving the Army, it left a lasting impression on Allen. “Being a soldier changed my perspective on life and gave me discipline, which I really needed in my life as a young man coming from the streets. The structure and foundation are what I apply to my life today,” he said.

While in the Army, Allen was always going hiking and shooting guns with his friends in Montana, constantly calling himself a Hood Neck. After serving, he came home to Texas and worked for a gun store. “Some of my coworkers at the store invited me on a hog hunt and I had never hunted before,” he said. He shot a hog and began sharing pictures in different online groups like “black hunters”, referencing being a Hood Neck.

The post was immensely popular, garnering over 100,000 likes and reactions.

Allen decided to make it official, pulling out his old high school design software. He created a logo, put it on a t-shirt and decided to see if he could sell anything. “I woke up the next morning to one sale. It blew my mind that someone wanted to wear it,” he said.

Soon, he was studying e-commerce and IRS code for nonprofits.

Now four years later, it took off. “Those who follow me or wear my stuff are from all over the world and walks of life. I tell people all the time it isn’t just Black people who come from the hood and anyone can consider themself a redneck. Listen, I am a cowboy and I am proud of it,” Allen explained. “Hood Neck is a play on words but my intent is to really break down barriers. Hood Neck is a bridge between two cultures and puts an end to stigmas and negative stereotypes.”

He shared stories of growing up in the “hood “with his mother’s side of the family but also spending time with his paternal side, who hailed from the swamps of Louisiana. When they visited he and his siblings enjoyed hunting squirrels and digging in his grandmother’s garden.

“My grandfather used to take pic bladders and blow them up into balls for us kids to play with,” Allen said with a laugh.

As for his passion for guns, it seems that runs in the family too. “My maternal great grandmother owned the first Black barbershop in Galveston, Texas. She got a loan from the mob to open it and carried a gun with her everywhere. I guess I have a lot of her in me too,” he shared.

He recently attended the 2022 Shot Show (shooting hunting outdoor trade show) and was constantly approached by fans or people wearing his gear. “It was such a difference from my first show in 2019 when no one knew who I was and I was really struggling,” Allen said.

Beyond his passion for running Hood Neck, he also teaches, working with domestic violence victims as well as children on firearm safety. Allen also lends his name to organizations treating PTSD and preventing suicide among veterans.

Hood Neck is now a 501c3 nonprofit and although he loves the shop he operates, it’s the outdoor trips he takes people on which he’s truly passionate about. “I want to show people how transformative being outside can be for them,” Allen said. “Learn how to make a fire and grab a fishing pole, even if you don’t know how to use it. Let’s put down our phones and just be ‘hood necks’ together.”