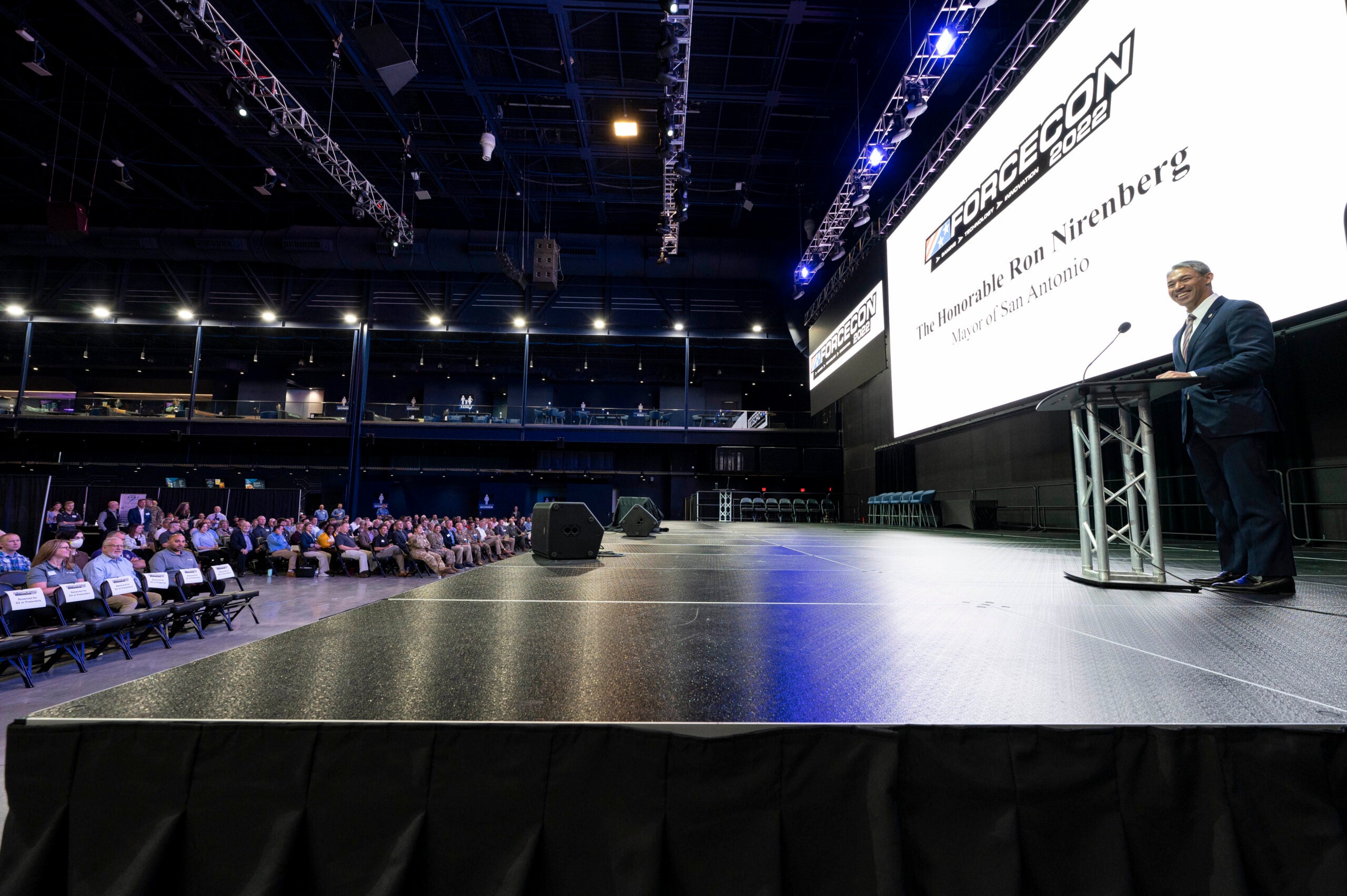 On May 28th and 29th, all six branches of the military made history as they put on San Antonio’s first-ever FORCECON event during its two-day debut for all to watch and participate in at Port Tech Arena. As the players competed head-to-head with the other branches, this event was televised live for viewers to be able to tune in and watch at home. We Are The Mighty was invited to go beyond the screen and exclusively meet the players who would be competing in the all-day tournament before the battle began.

WATM: Allyson, when did you first get into video games?

Allyson: I began as early as 5 years old. Growing up, my mom traveled often with work, but I was able to show my gaming abilities to my dad and brother which I think was a pleasant surprise to them how quickly I was able to not only learn the game but I was actually pretty good at them too.

WATM: How has it been being able to practice with your teammates?

Allyson: Playing with my teammates at Halo we’ve been able to build energy with each other like none other and really just let each other shine. Every day we’re better than how we were the day before and we all just make each other better.

WATM: Before I got the chance to sit down with you I was told that you were the best female player here, do you mind telling me about that?

Allyson: Oh my gosh, I actually don’t like when everyone says that. I don’t want to be known as just the best female player.

WATM: I fully understand, you just want to be known as the best player period right?

Allyson: Exactly, I want to be known for how good I am at the game, not just for being the only female up there.

WATM: So Ian, when were you first brought into the world of gaming?

Ian: Well I began gaming back in 1996, gaming was all I wanted to do. I’m really a competitor at heart, and I also played a lot of real physical sports growing up. But gaming was always just a good medium for me.

WATM: What do you think of the first-ever FORCECON so far?

Ian: Oh man, this is my Superbowl! This has been the greatest moment of my entire military career.

WATM: That’s awesome, what has been your favorite part of this weekend so far?

Ian: Getting to work with all the other branches under a camaraderie base has definitely been one of the best parts. Even though we all like to be competitive, it’s all in good fun. Being able to work with the best teammates, coaches, crew, and production team has just been a great experience because everyone wants it to be the best.

WATM: When did you both start gaming?

Dalton: Around 2004 when Halo first came out.

Ryan: I was pretty young, I think I was only 3 years old.

WATM: What made you guys want to join the forces?

Dalton: My sister had already been in the Space Force and then I had decided that I would too, so I joined in 2020.

Ryan: My dad had done 20 years, so I followed in his footsteps and joined the Space Force too in 2021.

WATM: What are you guys most excited about for this weekend?

Dalton: I’m excited about how competitive everyone gets to be and being able to compete against all the branches.

Ryan: This is one of the most historical events outside of the pentagon with having everyone under one roof, so that’s pretty exciting.

WATM: Hugo, when did you first start gaming?

Hugo: I’ve been playing ever since I could hold a controller. I started with playing on the original Nintendo Mario 64 games and have just been working my way up ever since. I played to get better and get more competitive. Halo was the first competitive game I played at 17 years old.

WATM: How has gaming impacted your personal life?

Hugo: Well, you start forming close friendships with the people you play with. I even have friends that are God-parents to my kids. Gaming has advanced so much since I first started playing, now you can proceed in a future career in gaming, it’s no longer just a hobby.

WATM: How has gaming influenced your work life?

Hugo: It makes things more entertaining. It shows what’s beyond the uniform and humanizes us a lot more than how we are perceived by others, especially those who are not in the forces.

WATM: What has been your favorite part of this event so far?

Hugo: The amount of people who came to make today possible is just amazing. You have volunteers from all branches and all ranks from E2 to 06, and most of them are here after their workday duties. So it’s just great to see the turnout of the event and how many people wanted to make today the best one yet.

WATM: It’s so great that you were able to make it out here today and surprise everyone! Tell me about your experience being here so far.

Xavier: You know I wanted to come out and check out the games, I did not want to miss out on this. It’s so awesome to see how much the culture has changed in such little time and how competitive gaming has gotten now.

WATM: So what does this weekend mean to you?

Xavier: My dad was actually in the military, so I always try to support and show my support to any military events like these. I also run a gaming youtube channel as well, so gaming is a big part of my life.

WATM: How do you think this weekend brings changes to the community of gaming?

Xavier: It’s so cool to see that people are finally recognizing that gaming is so much more than what most initially think of it to be. Now that more people have eyes on this, they are able to see that there are more sides to both worlds and this shows what more gaming and the military have to offer.

WATM: So Major Parsons, has today been able to live up to your expectations?

Maj. Parsons: Today has absolutely gone beyond my expectations, really. This is at a higher production level and has a better turnout than the last version we did of this. I think that today has been beneficial for everyone. We’ve not only been able to showcase our program, but also  include the other branches in the path in building each other up from here. I think that everyone’s just so excited to be here, the energy is amazing.

WATM: What do we have to look forward to in the future of FORCECON? Maj Parsons: Well I think from here we’re just going to continue to push the envelope and take it even further than we have before. I’m trying to take this a step up and take this side of gaming international. In July, I wanted to introduce Halo international and bring something new to the table to the French Armed Forces. So there are a lot of new things coming soon, and I’m excited to make gaming something that can bring the forces together worldwide.