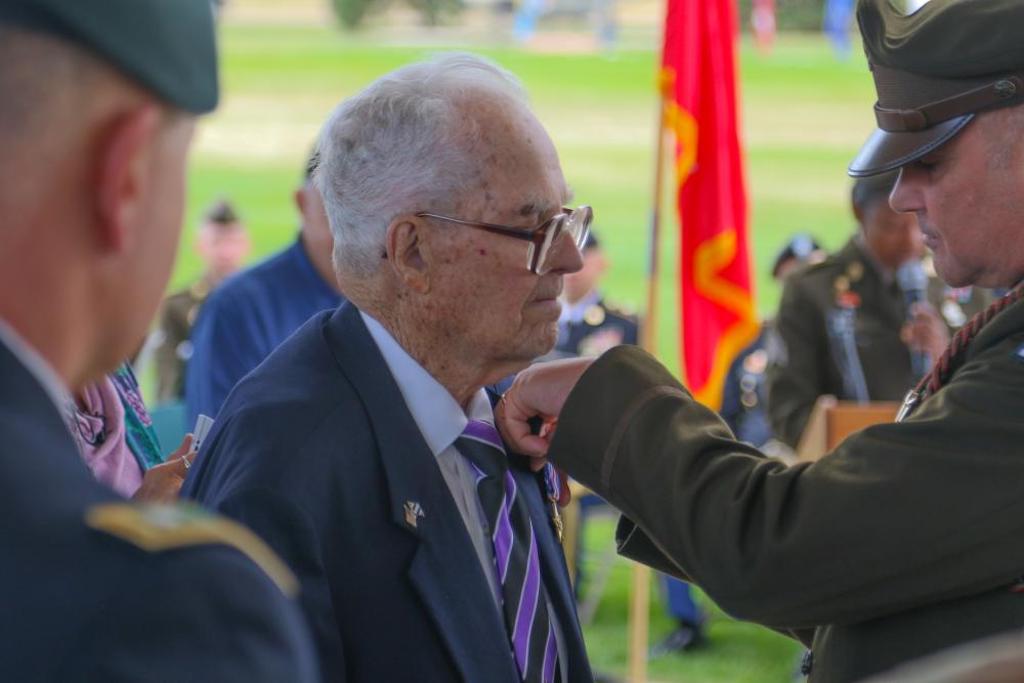 In the chaos of war, bravery on the battlefield can sometimes be overlooked. Paperwork can be misfiled or records can be lost leading to a lack of evidence in support of an award. Such was the case for Army veteran Harold A. Nelson. However, after nearly eight decades, Nelson was awarded the Silver Star for his actions during WWII.

On July 14, 1941, Nelson was drafted into the Army. He was assigned to Company F, 2nd Battalion, 7th Infantry Regiment, 3rd Infantry Division. Nelson participated in Operation Torch, the first major Allied amphibious assault, and landed in Morocco. He survived the intense fighting in North Africa and took part in Operation Husky in Sicily and Operations Avalanche and Shingle in Italy.

During a battle with German forces in Italy, Nelson ran out of ammunition. Under intense enemy fire, he ran hundreds of yards in the open to an abandoned German tank. Climbing up onto the tank, he manned the machine gun on the turret and suppressed the Germans firing on his comrades, allowing them to advance. However, a German grenade hit the pack on his back and tore it apart. Despite this, he continued firing until the Germans surrendered. This was just one example of Nelson’s bravery on the battlefield.

Over the course of the war, Nelson was shot three times and even had his appendix removed before returning to the front. He was awarded two Purple Hearts and the Bronze Star. “I guess the good Lord was looking after me,” Nelson said at the award ceremony. “I made six amphibious invasions under enemy fire, and there’s nobody lived that long, I don’t believe.”

In 2019, Nelson petitioned the Army Board for Corrections of Military Records to determine if he had earned the Silver Star. However, a 1973 fire at a military records storage facility destroyed some of Nelson’s records. His case was bolstered by a letter from his previous commander, Capt. James Pearman Jr., in support of Nelson’s actions during the war. One June 22, 2022, the Army’s Human Resources command approved Nelson’s Silver Star.

Living in Colorado, Nelson’s award ceremony was held at Fort Carson on October 4, 2022. However, the 3rd Infantry Division commanding general, Maj. Gen. Charles Costanza, presented Nelson with his Silver Star. “Harold Nelson served our nation with honor and distinction and I am grateful that we could honor his service today,” Maj. Gen. Costanza said during the ceremony. “It is important to ensure that the service and sacrifice of our Veterans, those whose shoulders we stand upon now, is never overlooked or forgotten. Harold is a Dogface Soldier and I’m proud to call myself one too.”

In addition to receiving the Silver Star, Nelson was inducted into the 3rd Infantry Division’s Marne Hall of Fame Class of 2022. “This moment means I’ve had a great life, a great family and great friends,” Nelson said. “And a lot of fun throughout the years.”