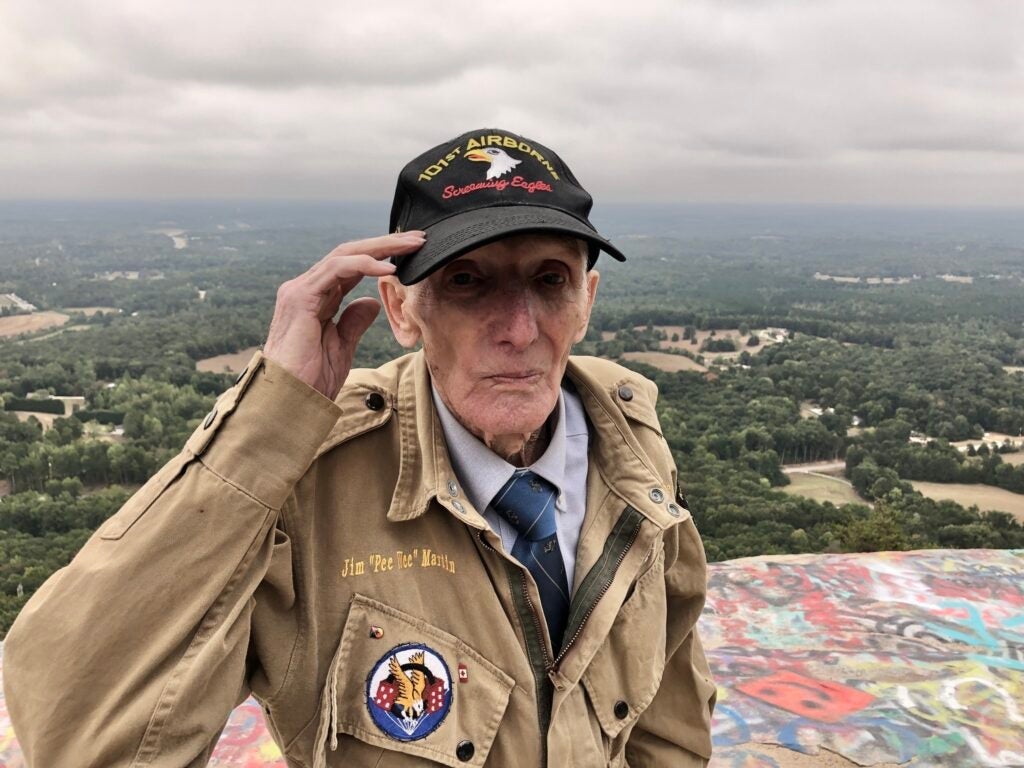 Jim “Pee Wee” Martin made headlines in 2021 when he celebrated his 100th birthday with a jump fest. The WWII veteran was an original Toccoa paratrooper, having served in G Company, 3rd Battalion, 506th Parachute Infantry Regiment, 101st Airborne Division. On September 11, 2022, Martin passed away at the age of 101.

In 1942, Martin joined the Army Airborne and trained at Camp Toccoa, Georgia. There, he earned his nickname “Pee Wee” for his small stature. After earning his jump wings, Martin went with the rest of the 506th PIR to England to prepare for the invasion and liberation of Europe.

During WWII, Martin fought in Normandy during Operation Overlord, Holland during Operation Market Garden, and Belgium during the Battle of the Bulge. His combat career earned him a Purple Heart and several Bronze Star Medals. Towards the end of the war, Martin was with the 506th when the regiment liberated a concentration camp in Germany and seized Hitler’s Bavarian home, the Berghof.

Despite his incredible service, Martin remained humble when he returned home from the war. He settled back into his hometown of Sugarcreek Township, Ohio and married his wife, Donna. They were married for nearly 73 years until her passing in 2019. Martin worked as an advisor on the HBO miniseries Band of Brothers which brought his wartime service to light. In recognition of this, a Veteran’s Memorial is being built in his hometown which will feature a larger-than-life statue of “Pee Wee” himself. At Martin’s request, the memorial will include a plaque with the names of all of the men who served in the 506th PIR.