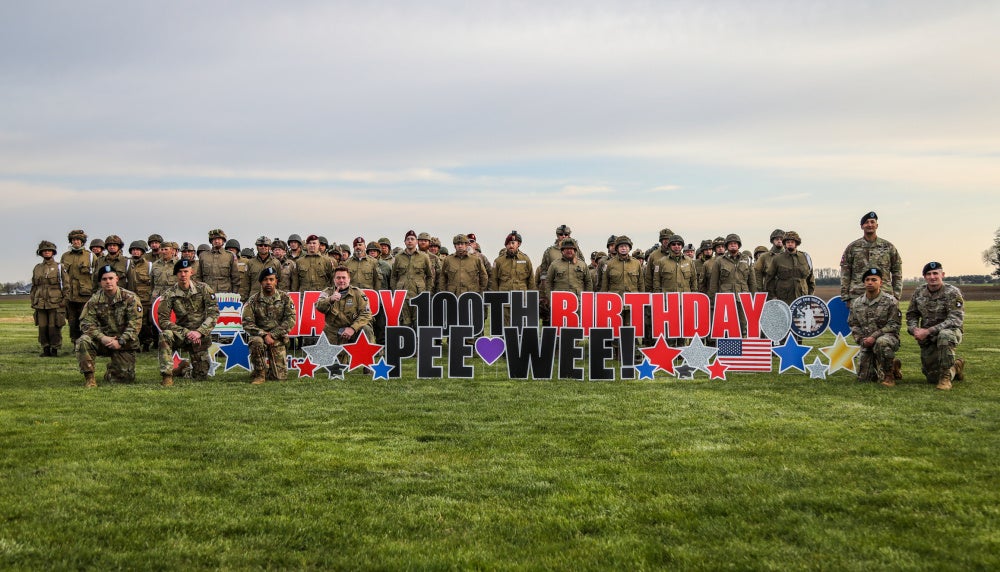 On June 6, 1944, the free men of the world joined together to liberate Europe from the clutches of Hitler. One of these men was 23-year-old Jim “Pee Wee” Martin. A paratrooper in G Company, 3rd Battalion, 506th Parachute Infantry Regiment, Martin was one of the original 101st Airborne troopers who went through jump school at Camp Toccoa, Georgia. It was during his airborne training that Martin received the nickname “Pee Wee” for his small stature. He went on to fight with the Screaming Eagles in Normandy, Operation Market Garden, and the Battle of the Bulge. During WWII, he earned the Purple Heart and the Bronze Star. In April 2021, Martin celebrated his 100th birthday with a massive jump fest near his hometown of Xenia, Ohio.

One of the last surviving “Toccoa Men”, Martin’s birthday is April 29. To facilitate the festivities, his birthday celebration was held over the weekend from April 23-25. Distinguished guests in attendance included Ohio Governor Mike DeWine and Command Sgt. Maj. Kevin Engler of the 2nd Battalion, 506th Infantry Regiment. Other 101st Airborne veterans, all of whom are over 90, showed up to celebrate their brother in arms’ birthday.

The Commemorative Air Force also supported the festivities with restored WWII planes. Using two Douglas C-47 Skytrains and a C-53 Skytrooper, the CAF conducted a flyover and mass parachute drop with reenactors on all three days. After the main drop, tandem parachuting was opened to the public as well.

On the evening of April 24, Martin was presented with multiple gifts and awards. Notably, the city of Xenia declared April 29 as Jim “Pee Wee” Martin Day in honor of his WWII service. Martin also served as an advisor on Band of Brothers, the HBO miniseries that made the 101st Airborne a household name.

Despite the weekend of festivities dedicated to him, Martin remains humble. He places emphasis on the achievements of his unit. “The Airborne, that patch got you any place you wanted to go and you didn’t have to lie or anything like that,” Martin said. “All you had to do is see that patch and people knew what you’d been doing. I’m very proud of the service that we did, and it’s not an individual thing about me; it’s what the unit did. I don’t go off of individuals.”

Martin also shared words of wisdom with the new generation of 101st troopers. “My advice is go in there, work hard, do everything right, don’t make any missteps, and remember this: all of us older guys are looking to you.”