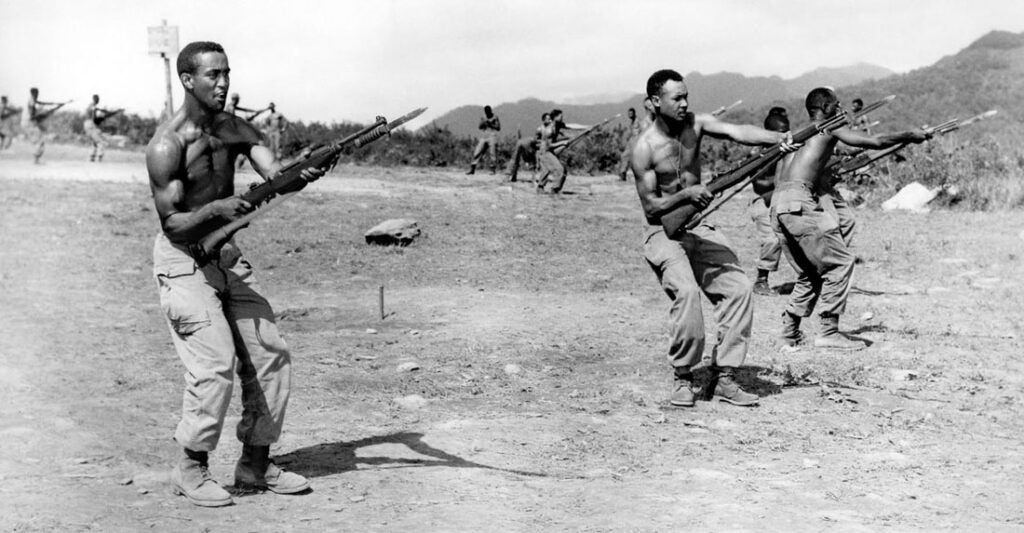 Segregated units are an unfortunate part of American military history. However, despite being marginalized, units like the 442nd Regimental Combat Team, 6888th Central Postal Directory Battalion, and 99th Pursuit Squadron demonstrated their resolve to serve their country with dedication and valor. One segregated unit that is often overlooked for its service during the Korean War is the 2nd Ranger Infantry Company (Airborne), the only all-Black special operations combat unit in U.S. Army history.

During the summer of 1950, the U.S. and UN were suffering heavy losses at the onset of the Korean War. Better-trained conventional North Korean forces had pushed all the way to the Pusan perimeter while communist agents penetrated past the frontline and engaged in sabotage on military targets and cities. The U.S. Army had no forces with which to respond to this guerrilla warfare; the Ranger units were disbanded after WWII due to the time and cost needed to train and outfit such specialized units. So, Army Chief of Staff Gen. Joseph Lawton Collins ordered the formation an an elite fighting force that could “infiltrate through enemy lines and attack command posts, artillery, tank parks, and key communications centers or facilities.” The result was the reformation of Ranger companies.

Although the military was desegregated by executive order in 1948 and Black soldiers were allowed to apply for special operations units, the Army pooled all Black Ranger applicants into the 2nd Ranger Infantry Company. Many applicants were WWII combat veterans while others were veterans of the 555th Parachute Infantry Battalion, the first Black paratrooper unit. The 2nd Ranger Infantry Company was organized on October 9, 1950, carrying on the legacy of Company A, 2nd Ranger Battalion. Made up of 135 enlisted men and 5 officers, the company was formally activated on October 25, 1950 at Fort Benning, Georgia. An entirely Black formation, the men quickly adopted the motto “Buffalo Rangers” in tribute to the Buffalo Soldiers who came before them.

The Ranger trained 60 hours a week and ran five miles everyday. Their instruction included reconnaissance, long-range patrols, land navigation, and camouflage. They practiced raids, ambushes, and infiltrations, often at night and with live fire. Much of their training regimen came from the program used by then-2nd Lt. Ralph Puckett to train the experimental Eighth Ranger Company. The dropout rate of the Ranger companies was 30 percent. However, those that made it to graduation on November 15, 1950 were well-prepared for combat. The 1st Ranger Infantry Company was rushed to Korea by air while the 2nd and 4th Ranger Companies were sent by train to San Francisco, California before making the journey across the Pacific by ship. The 3rd Ranger Company stayed behind to train additional Ranger units.

On December 30, 1950, the 2nd Ranger Company arrived in Korea. They were attached to the 32nd Regimental Combat Team, which had just escaped the Battle of Chosin Reservoir, in Tanyang. The Rangers were assigned to protect the regimental aid station from enemy infiltration. To do this, they set up roadblocks and conducted counter-guerilla patrols. On January 7, 1951, they saw their first action when a Ranger roadblock repelled 20 North Korean infiltrators. A second attack by a company-sized enemy force was also repelled by the same roadblock. This engagement also saw the 2nd Ranger Company suffer its first KIA, Sgt. First Class Isaac Baker, as well as three wounded. Still the Rangers proved their ability on the battlefield and effectiveness against similar enemy forces. A Ranger patrol on January 9 killed 11 North Koreans from an advance patrol during a six-hour firefight while suffering just one Ranger wounded.

On January 14, 1951, the 2nd Ranger Company led an armored attack on the village of Majori-ri, part of an offensive to drive Chinese forces out of Tanyang. Despite being ambushed by a well-entrenched Chinese battalion, the Rangers fought ferociously and captured the village, later repelling a Chinese counterattack. The Rangers lost five dead and five wounded, but killed 100 Chinese soldiers. A second counterattack hit the 2nd Ranger Company during a movement to reinforce another American unit, killing another six Rangers and wounding three more. Follow-on operations in the Tanyang area, as well as frostbite and illness, attrited the 2nd Ranger Company to 67 men by the end of January 1951.

Controversially, X Corps Commander Maj. Gen. Ned Almond ordered all Black replacement soldiers be sent to the 2nd Ranger Company. These men had no Ranger training and, although they restored the company’s numbers back to full strength, reduced the company’ combat effectiveness. In early February, an offensive began to drive North Korean and Chinese forces back across the 38th parallel. The 2nd Ranger Company was called on as a probing force and to lead attacks on the enemy line. On February 20, 1951, the Rangers led an attack on Chuchon. Despite discovering that the Chinese defenders were more numerous than expected, the Rangers persisted and charged with fixed bayonets, forcing the Chinese forces to retreat. Their heroism on the battlefield was recorded by battlefield reporters who were present, bringing the 2nd Ranger Company international fame. Field commanders made similar reports to the Pentagon and the company was pulled from the lines for a new mission.

On February 28, 1951, the 2nd and 4th Ranger Companies were attached to the 187th Airborne Regimental Combat Team for a combat parachute drop. They conducted training jumps and tactical exercises throughout March 1951 in preparation for Operation Tomahawk. The ongoing Operation Ripper had the majority of the UN force aggressively driving Chinese and North Korean forces back north. Tomahawk was planned to insert the Rangers and the 187th behind enemy lines, cut them off from their supply lines, and force them to retreat north of Seoul. During their preparation, the 2nd Ranger Company was reinforced with a new platoon of Black Rangers direct from Fort Benning.

On March 23, 1951, at 0915 hours, the 2nd Ranger Company dropped around the town of Munsan-ni, 24 miles north of Seoul. Notably, the operation was the first U.S. Army Ranger airborne combat insertion in history. Two Rangers were injured during the jump, but the airborne force caught the enemy by surprise and captured several elements of the North Korean 19th Division. The Rangers regrouped and moved south to link up with the 6th Tank Battalion at Hill 151. One mile north of the hill, the 2nd Ranger Company surprised a Chinese platoon in a village where they killed six enemy soldiers and captured 20. The Rangers then advanced on the hill against North Korean resistance. Two North Korean platoons retreated from the hill, leaving behind 11 dead. The Rangers suffered one dead and two wounded in taking Hill 151. After linking up with the tanks, the airborne force spent the next five days mopping up enemy resistance and advanced 20 miles north.

After the resounding success of Operation Tomahawk, the 2nd Ranger Company was attached to the 31st Regimental Combat Team in April 1951. Up to 400 replacements filtered into the company, trained up, and transferred to other units as the Army in Korea desegregated. The company eventually stabilized at 123 men, including the first white soldier in the unit, medic Joe Russo.

By May 1951, the 2nd Ranger Company was posted on Hill 258 and was allowed R&R rotations off the line. One such rotation left only the company executive officer, 1st Lt. James Queen, and 80 enlisted men on the hill. On May 15, Queen discovered that Chinese troops were massing on nearby Hill 581, from which they could attack the undermanned 2nd Ranger Company. Two days later, Queen led a preemptive attack and advanced on the Chinese troops under the cover of an artillery barrage. Queen’s plan worked and the Rangers caught the Chinese by surprise, killing 50 and wounding 90 in a two-hour firefight. The Chinese counterattacked with two infantry battalions supported by sniper and mortar fire.

With the help of friendly artillery, the 2nd Ranger Company held back the Chinese assaults. After repelling four successive attacks, the Rangers ran out of grenades at 0200 hours on May 18. By 0300 hours, they were running low on ammunition. A Chinese assault caught the Rangers off guard and drove them off the top of Hill 581. Queen organized a counterattack and retook the hill by 0500 hours. At 0645 hours, the Chinese abandoned their assault on the hill and retreated. The Rangers killed at least 120 enemy soldiers and wounded hundreds more. Meanwhile, the 2nd Ranger Company suffered just 10 wounded and no men killed. What came to be known as the Battle of the Soyang River stunned American commanders and the 2nd Ranger Company was praised for their performance on the battlefield.

Afterwards, the Rangers were sent to reinforce the 7th Marine Regiment against Chinese attacks. They spent three days conducting search and destroy missions, culminating with an attack on Hill 545 against a Chinese company that previously drove the Marines back. The Rangers successfully displaced the Chinese force, killing 15 enemy soldiers for two Rangers wounded. Throughout June 1951, the Rangers engaged in offensive operations north of the 38th parallel, including the taking of Hill 772. During this successful attack, backed by air and artillery support, the Rangers lost one man killed and 15 wounded.

With peace talks underway and offensive operations diminishing, the Army ordered the deactivation of the Ranger companies on July 10, 1951. While still in Korea, the 2nd Ranger Infantry Company was disbanded on August 1, 1951. Along with veterans of the other Ranger companies, most of the men were folded into the 187th RCT. During its ten months of existence, the 2nd Ranger Company earned four campaign streamers in Korea. Nine men earned the silver star and 11 earned the Bronze Star. 84 Rangers earned a total of 103 Purple Hearts, with 11 Rangers earning two and four Rangers earning three.

The 2nd Ranger Company was one of 16 Ranger companies formed during the Korean War and one of seven that saw combat. In 10 months, the men overcame intense resistance from the enemy as well as racism from their own lines. Today, their legacy is carried on by A Company, 2nd Ranger Battalion, 75h Ranger Regiment.