The B-36: The plane 'so good it never dropped a bomb in anger' - We Are The Mighty

The B-36: The plane ‘so good it never dropped a bomb in anger’ 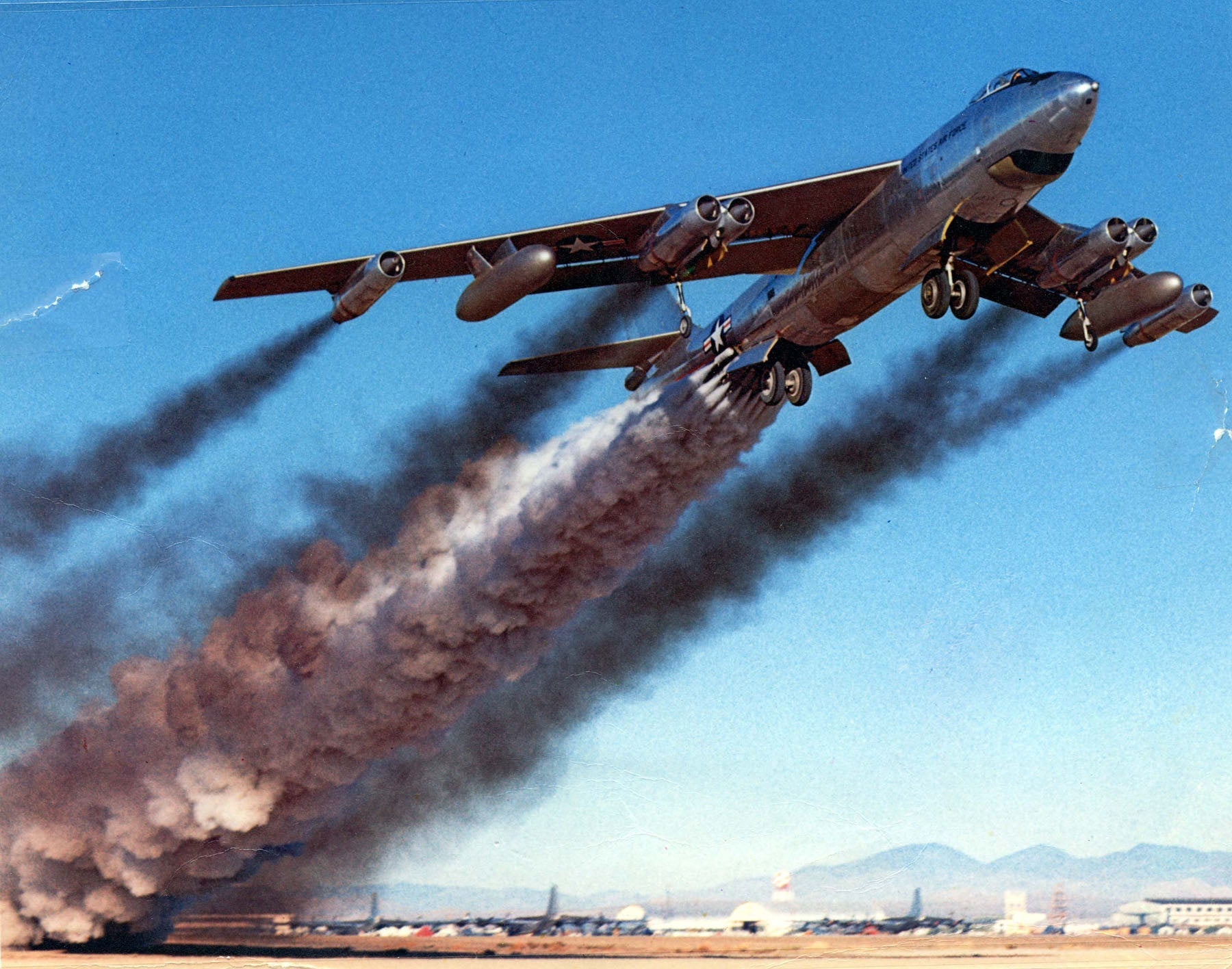 There was a plane designed during World War II and completed just after cessation of hostilities that served for 13 years but was never called upon to fly an operational mission: the B-36. According to some, this is a sign that it was so successful at deterrence that no foreign adversary wanted to tussle with it. But it’s not that clear cut.

The design phase for the aircraft began in 1941 when American leaders asked for a plane that could take off in the states, fly into Germany and bomb Berlin, and then fly back home. But the first B-36 prototype rolled out of a hangar six days after the Japanese forces surrendered, ending World War II. Its maiden flight didn’t take place until August 8, 1946, almost a year after the end of the war.

The final design had a wing span of 230 feet and featured six engines and propellers. These propellers were mounted on the back of the wing, pushing the aircraft through the sky instead of pulling it. At that point in history, it was one of the largest planes to ever fly.

The U.S. built 384 of them and the plane ushered in the era of strategic bombing deterrence, the idea that you could threaten an enemy with such wholesale destruction that they would instead opt to just not fight you. And, while it can’t be directly tied to this one aircraft, the B-36 did fly over a period of tense peace. It never once dropped a bomb in anger, possibly because it could carry large nuclear bombs and it could fly from Maine to Leningrad and back without refueling.

But it did drop bombs — both in training exercises and on accident. In February, 1950, a B-36 crew was forced to jettison their nuclear bomb near British Columbia after flames were sighted in three of their engines. There is a chance that the weapon was a dumb bomb used for practice runs, but it was unarmed either way.

In 1957, a B-36 crew accidentally dropped their Mark 17 nuclear bomb near Albuquerque, New Mexico. The conventional explosives in the weapon did explode, but the nuclear material, thankfully, did not.

But the craziest part of the B-36’s career with nuclear material arguably came during planned experiments rather than an accident in flight. In 1942, one of the Manhattan Program scientists spitballed the idea of a nuclear-powered aircraft, one with a nuclear reactor instead of huge gas tanks.

Over the following 16 years, the Army and then the Air Force devoted increasing amounts of time and money to studying and then experimenting with the concept. In 1951, they selected the B-36 Peacemaker, the only aircraft large enough to hold the test reactor and the necessary cockpit modifications to protect the crew.

One B-36 was modified into the NB-36, the nuclear-powered bomber. While it flew 47 test flights and had a powered reactor for most of them, it only ever flew using conventional fuel as scientists and engineers studied how the reactor worked in flight. Advances in conventional aircraft design made a nuclear-powered bomber largely irrelevant, and the program was shelved in 1958.

The bomber was big enough and strong enough to take part in the short-lived “parasitic fighter” concept wherein a massive bomber could take a fighter escort with it into combat.

The larger plane would head towards its target and, if it was spotted by enemy radar or fighters, would release a fighter from its belly. The fighter pilot would engage the enemy forces, breaking them up or destroying them before returning to its parent bomber.

The B-36 would then receive the fighter into its belly again and continue toward the target. The advent of mid-air refueling made the concept obsolete, and it also ended the necessity of larger bombers with larger fuel tanks like the B-36. After all, a smaller bomber with more conservative tanks could take off, top up on fuel just outside of the enemy air defense ring, and then pierce the airspace.

So, the B-36 had a long and fairly storied career without once going on an operational mission against an enemy force. It gets a lot of credit for that, but it’s not actually the only aircraft to carry that distinction. The B-47 Stratojet and the B-58 Hustler were jet-powered aircraft with a similar mission to the piston-powered B-36.

They were all designed to fly from U.S. bases, drop big bomb loads, and then fly home. They were all nuclear-capable and they all went their entire careers without dropping a bomb on an enemy — but that alone doesn’t necessarily mean that they were or weren’t successful bombers.

While their strategic deterrence mission was important, they were unsuitable for a conventional bombing mission because they all had handling or speed issues that made leaders worried they would be too susceptible to being shot down. So, it’s not really that they were too good to need to drop bombs, it’s that they were too specialized for a specific deterrence to complete the operational missions.

The modern B-1 and B-2 stealth bombers, on the other hand, have both served as nuclear-deterrent bombers but had the handling, speed, and stealth necessary to survive while dropping bombs in Iraq, Afghanistan, and elsewhere.

In fact, the U.S. will likely turn to these modern successors to the B-36 in case of war with China, Russia or North Korean, not for their nuclear payloads but for their value at dropping conventional bombs (the B-1 has been modified to remove its nuclear capability to comply with treaties).

So, toast the success of the B-36 and its peers — but don’t forget the modern bombers that rose above the forebears.