Today in military history: US loses H-bomb in Spain - We Are The Mighty

Today in military history: US loses H-bomb in Spain 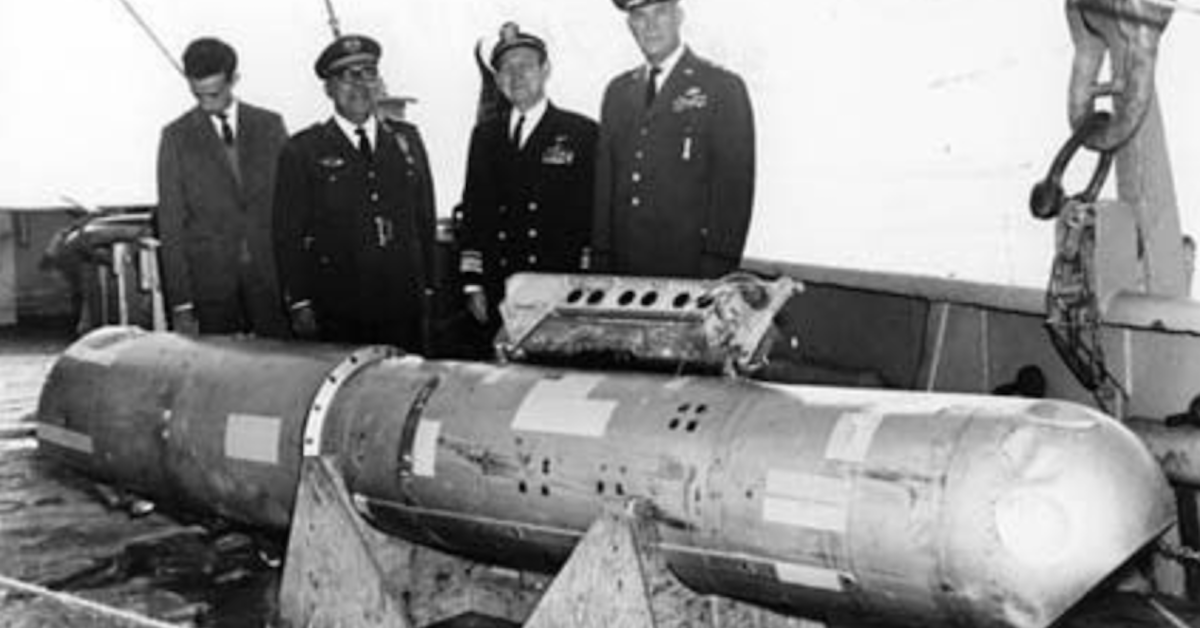 During the Cold War, the U.S. employed nuclear-capable bombers world-wide to fly sorties capable of launching a first-strike against the Soviets…just in case. The Pentagon has admitted to more than three-dozen incidents where such bombers had complications resulting in nuclear contamination, damaged bombs, or, in this case, complete loss of a nuclear weapon.

On Jan. 17, 1966, a B-52 was scheduled to refill with a KC-135 over the Mediterranean coast of Spain. The B-52 collided with the tanker. The belly of the KC-135 was torn open, and jet fuel spilled into the tanker and onto the bomber. Explosions ripped through both planes, consuming the tanker and killing all four men aboard. Three men in the tail of the bomber were killed, and the four other crew members ejected.

The explosion caused the B-52 to drop three 70-kiloton hydrogen bombs near the town of Palomares and one in the sea. Over three times the size of the bombs used against Japan — and carrying over 100 times the explosive power — a single weapon of that size could cause thermal radiation for over 13 square miles.

None of the bombs were armed, but two of them exploded and scattered radioactive plutonium upon impact, exposing the people of Palomares to nuclear radiation, for which the U.S. would settle at least 500 health claims.

A third bomb was recovered, but the fourth fell into the sea. After months of Naval searches, a submarine spotted the H-bomb and it, too, was finally recovered.

According to Business Insider, the disastrous effects are still being felt:

Despite removing soil in the immediate aftermath, tests in the 1990s revealed high levels of Americium, a product of decaying plutonium, in the village. More tests showed that 50,000 cubic meters of the soil remained radioactive. The U.S. agreed to clean up the contamination remaining in the village in 2015. Many of the U.S. veterans who assisted the search have said they are dealing with the effects of plutonium poisoning. Linking cancers to a single exposure to radiation is impossible, and there hasn’t been any study to assess whether they have an elevated incidence of illness, but in the years since, some have been ravaged by disease.

Featured Image: Eighty days after it fell into the ocean following the January 1966 midair collision between a nuclear-armed B-52G bomber and a KC-135 refueling tanker over Palomares, Spain, this B28RI nuclear bomb was recovered from 2,850 feet (869 meters) of water and lifted aboard the USS Petrel. (Image from U.S. Navy)