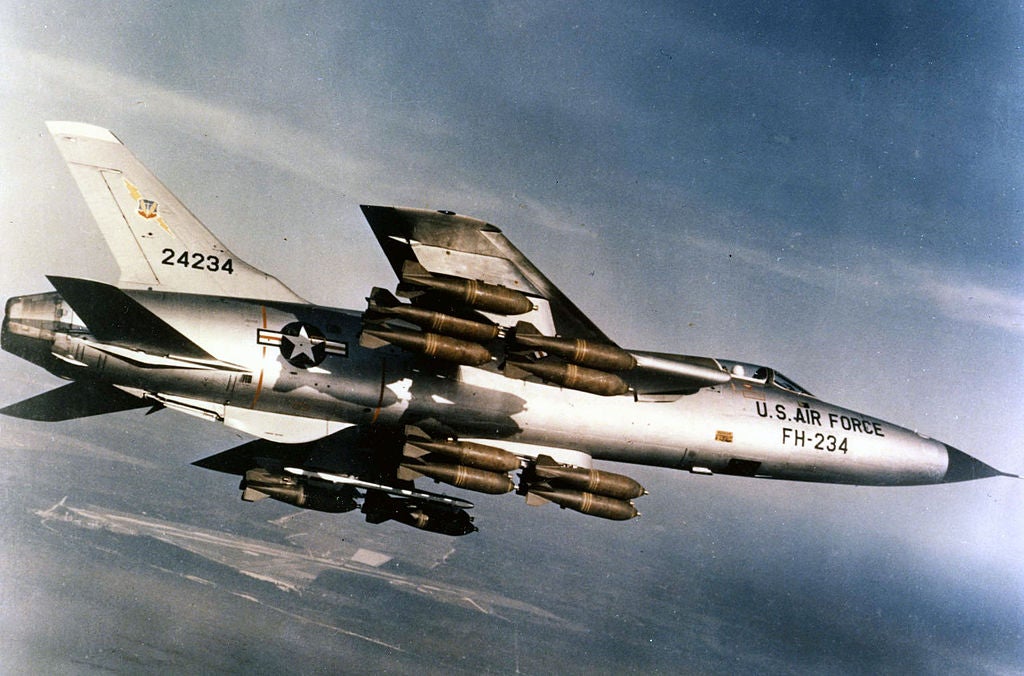 The F-105 Thunderchief, affectionately known as a “Thud” to the Air Force personnel of the time period, was the primary aircraft for strike bombing missions during the Vietnam War. Strangely enough, it was also the only American plane to be removed from combat service because of high loss rates.

What should have been an easy win for the Air Force turned out to be a giant fiasco for a number of reasons. Luckily for the Air Force, the Thunderchief found a new life with an entirely different and kinda crazy mission.

The F-105 was the Air Force’s premier strike bomber at the beginning of the war in Vietnam for a number of reasons. It was a supersonic bomber, capable of delivering more ordnance at one time than a B-17 Flying Fortress or the Consolidated B-24 Liberator. It was the largest single-seat combat aircraft ever made. It was also an easy target.

Thuds were originally designed to be used against the Soviet Union, assuming World War III would be a war of tactical nuclear weapons. The high-speed bomber was conceived as an aircraft that could fly into an area at Mach 2, drop tactical nukes on Soviet Command and Control elements, and then make a hasty escape.

However, as one Secretary of Defense would point out more than 50 years later, you go to war with the army you have, not the one you wished you had. So when the United States ramped up its involvement in South Vietnam, the F-105 came with it. Flying strike missions over the jungles of Southeast Asia was not the planned mission for the F-105, however.

Despite its loss rate, the Thud could take a beating and keep on flying. American pilots and ground crews made the F-105 a formidable opponent for the communists, even if it was doing duty in an off-label capacity. Unfortunately for the F-105, it was often flying against skilled North Vietnamese pilots flying the MiG-21, which could easily outmaneuver the bomber. All of its 27 air victories came against MiG-17s.

In more than 20,000 Thunderchief sorties flown during the war, 382 aircraft were lost in combat. Another 62 were lost outside of combat, which led American war planners to phase out the bomber in favor of the F-4 Phantom II and the F-111 Aardvark. But although the Thunderchief’s bombing run days had ended in 1970, three years before the Vietnam War ended, the Thud’s other mission continued, one that led pilots to think: “You gotta be sh*tting me.”

During the war, the threat of surface-to-air missile (SAM) systems in North Vietnam led to the development of anti-radar “Wild Weasel” missions, at which Thuds were perfectly suited. The F-105F was developed, featuring improved sensors and electronic warfare equipment, along with Shrike anti-radiation missiles and bombs.

Early F-105F missions accompanied F-105 bombing runs, but led to a high casualty rate among the Wild Weasel planes. A new F-105G was created with upgraded Radar Homing and Warning (RHAW) systems and other electronic countermeasures. The F-105G stayed in Vietnam until the end of the war, even after the regular F-105s went home.