Before they were game show hosts, these household names served in the military 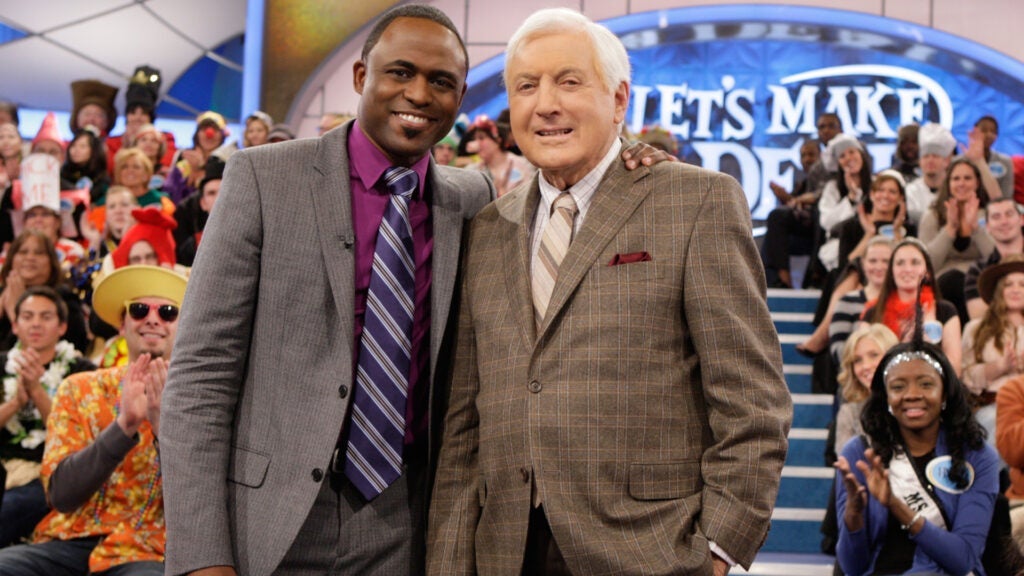 Wayne Brady and Monty Hall on Let's Make a Deal.

Game shows easily become part of our lives. We get to know the game show hosts and see the guest win big prizes, most of the time. The shows are done with good humor and make us laugh. We live vicariously through the contestants and feel their emotions. Most importantly they provide us sustenance during our sick days at home from school and work. At least the Price is Right and the original Let’s Make a Deal did that for me.

The man known to make deals with people from all walks of life, Monty Hall served in the Canadian Army during World War II. His duties included being the emcee of Army shows during his service. It seems like the Army made the most of his inherent talents which certainly supported his civilian career. He immigrated to the U.S. from Canada in 1955 to focus on breaking into American broadcasting as his attempts in his home country were futile. His career included being a radio analyst for the New York Rangers, the host of Video Village and then the host of Let’s Make a Deal after he moved to Southern California. He hosted LMAD through the 60s, 70s, 80s and was brought back again in the early 90s for another run. He even inspired a game theory reference called the Monty Hall problem.

Bob Barker hosted one of the best game shows on TV with The Price is Right from 1972 to 2007. He hosted another game show before with Truth or Consequences from 1956 to 1975. Barker served in the U.S. Navy during World War II from 1943 to 1945. He has appeared on screen as well in Happy Gilmore, as himself, on an episode of Bonazana and on WWE Raw wrestling as a guest host. Barker was at one time the longest-running game show host, however that baton has been passed on to another person on this list. He is an ardent supporter of animal rights and animal rights activism.

Yes, the one and only, incomparable late Betty White hosted a game show! It was called Just Men! and it placed two different female contests against each other in an attempt to predict answers to questions asked prior to a seven-male panel of celebrities. It lasted one season and 65 episodes. White is known for many things to include comedy, being a game show panelist and for her work on some of the best sitcoms of all time. Before her death last year, she held the Guinness World Record for the “Longest TV career by an entertainer (female).” White has received five Primetime Emmy Awards, two Daytime Emmy Awards and three Screen Actors Guild Awards. Her service was during World War II with the American Women’s Voluntary Services. She was assigned the duty of driving a truck for the PX with military supplies to the Hollywood Hills. While volunteering she met her first husband Dick Barker who served in the Army Air Corps as a fighter pilot. Her most notable work is on The Mary Tyler Moore Show, The Golden Girls and Hot in Cleveland.

Drew Carey, one of America’s favorite comedians and stand-up comics served in the Marine Corps Reserve from 1981 to 1987 and earned the rank of sergeant. Post his service he ventured into the tough and many times brutal world of stand-up comedy, which through some success, earned him the right to his own show, The Drew Carey Show. He is also known for the improv comedy show Whose Line Is It Anyway? and his brief participation in WWE. He hails from Cleveland, Ohio which is the setting of his sitcom and the home to his favorite sports team, the Cleveland Guardians. He has hosted The Price is Right since 2007 and Bob Barker’s retirement.

Pat Sajak has been a mainstay in the television game show world for his long tenure on Wheel of Fortune, which started in 1981. He served in the US Army as a disc jockey for the American Forces Vietnam Network and he hosted Dawn Buster. The Dawn Buster show was made famous for prior host and veteran Adrian Cronauer, who had signed on as Good Morning, Vietnam! A movie was made of the same name about Cronauer with Robin Williams. Sajak’s career spanned being a radio disc jockey upon his return and then anchoring NBC’s Today Show five-minute newscast. He worked as a weatherman for KNBC-TV in Los Angeles as well. Merv Griffin, the host of Wheel of Fortune, asked Sajak if he would like to replace him on the show. Sajak is now the longest-running host of a game show and surpassed Bob Barker in the record book. He has appeared in other media including an episode of the A-Team, The Commish and Brickleberry.