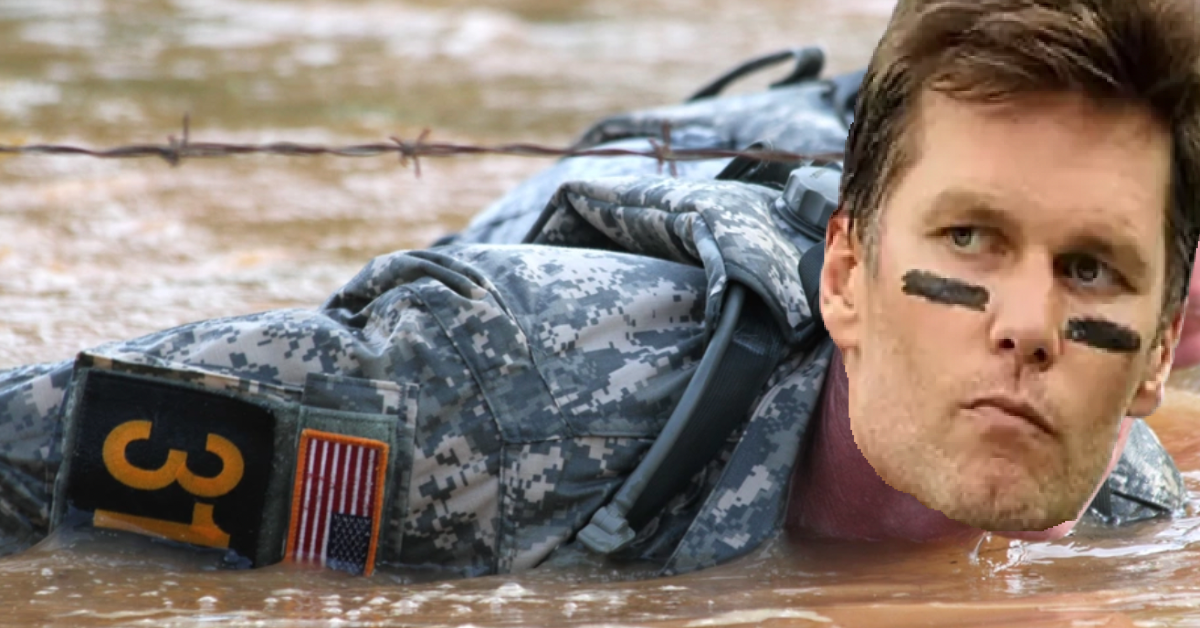 Oh, Tom Brady. First, before we completely eviscerate you for your recent comment about NFL seasons being like deployment, we want to thank you for your service. Yes, indeed, the Tampa Bay Buccaneers quarterback did compare his life of luxury to that of an E-2 eating MREs on the ground somewhere overseas. “I almost look at like a football season like you’re going away on deployment in the military, and it’s like, man, here I go again,” Tom Brady said on the October 17 episode of the Sirius XM podcast he co-hosts called “Let’s Go!”

Watching veterans take to social media to air their grievances was everything we’d hoped it would be. Here are our 5 favorite responses.

Army Ranger Brad Thomas, who served during Black Hawk Down obviously knows a thing or two about dodging bullets, which is clearly THE EXACT SAME as dodging tackles, took to Instagram to voice his opinion. The “Iraq 2003 colorized” Photoshopped version of his time in service adds a contemplative Brady, who is clearly taking a knee to reflect on the op.

We love absolutely everything about this side-by-side comparison about how football and military service are so similar. Keller walks us through everything from pay, honors and rank to family, operations, and more:

Honors: Tom Brady has seven Super Bowl rings. Service members can sometimes wait years to be appropriately recognized for their bravery. It took 16 years for Air Force Tech. Sgt. John A. Chapman to be posthumously awarded the Medal of Honor for sacrificing his life to save other special operators in Afghanistan Operation Anaconda in 2002.

Family: OK, so Brady actually did marry a supermodel and play Division 1 football, unlike the new E-2 that just showed up to your unit who turned down a full-ride to a Power 5 school to serve his country and whose girlfriend is totally a Canadian supermodel, which is probably a bad case of catfishing anyway.

Not much more to say about that – except it’s awesome.

Davis, who is an NFL writer/sub-package columnist for USA Today, served as an artillery officer in the Army. He gives Tom Brady a little bit of grace, which we guess is the adult thing to do.

Harless has gone viral with her open letter to Tom Brady, noting the real differences between deployment and football season. “Until you’ve lost that friend on the battlefield, put a buddy on the medevac chopper, felt the rattle of incoming fire on your base, and dropped to your knees thanking God as you hold your children wondering how you made it home, you do not get to compare your few months of making millions playing a game to a lifestyle that thousands choose to do. That thousands raise their hand volunteering to protect our country so you can throw a ball,” she writes on Facebook.

Whether you love Tom Brady or hate him, think he’s an idiot or just stuck his foot in his mouth, we can all agree: NFL season and a military deployment really aren’t the same thing.