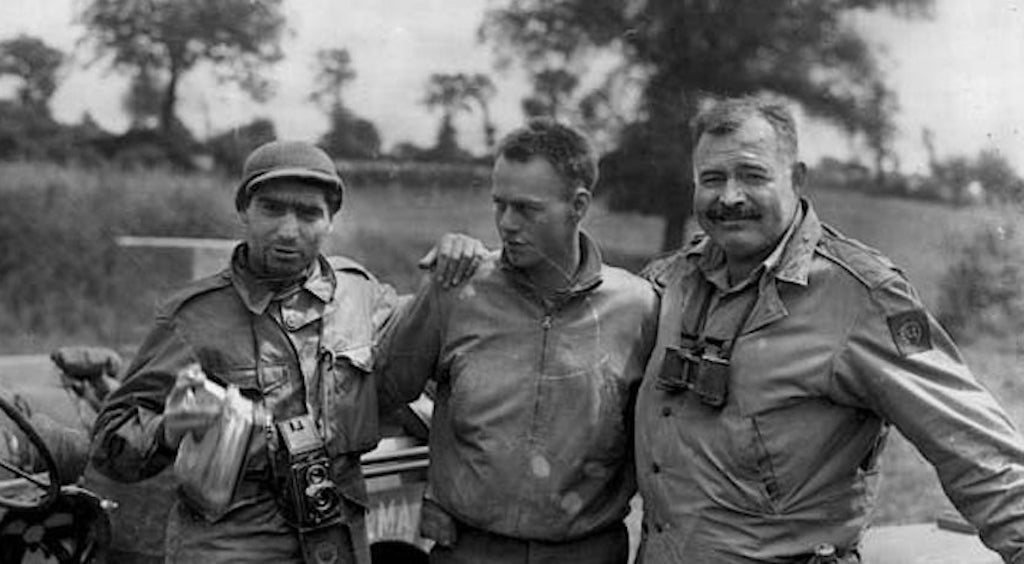 Hemingway (right) had his own objective during the liberation of Paris (Public Domain).

Ernest Hemingway is one of the greatest writers of the 20th century. His experiences during WWI and the Spanish Civil War served as the bases for his classic novels A Farewell to Arms and For Whom the Bell Tolls, respectively. During WWII, Hemingway served as a war correspondent and witnessed the D-Day landings at Omaha Beach. As the allies advanced on Paris, he embedded himself with the 22nd Infantry Regiment.

Deviating from his noncombatant role as a war correspondent, Hemingway made contact with French Resistance and militia fighters, relaying intelligence reports back to allied forces. While Hemingway’s love for the French capital was a strong motivator, the writer had a specific target that he wanted to liberate: the Ritz.

When the Ritz Paris opened in 1898, it did not feature a bar. However, the demand of thirsty Americans escaping Prohibition eventually led to the establishment of a men-only bar in 1921. It was frequented by icons of the era including F. Scott Fitzgerald, Cole Porter and, of course, Ernest Hemingway. In 1926, a ladies bar was opened at the Ritz. The segregation of the genders was relaxed in the 1930s and the ladies bar was rebranded as the Petit Bar. It was here that Hemingway spent a great deal of time chatting, betting and drinking.

Following the Nazi occupation of Paris in the summer of 1940, the Ritz became the headquarters of the German Luftwaffe in France. Infamous Nazis including Hermann Göring and Joseph Goebbels frequented the hotel and its famous bar. Hemingway, determined to liberate one his favorite Parisian haunts, made a request to the French Commanding General Philippe LeClerc for a detachment of soldiers to secure the Ritz. When the writer’s request was denied, he gathered a group of French Resistance fighters, commandeered a jeep and headed for the hotel himself.

Hemingway and his band of fighters pulled up to the Ritz on August 25, the same day that the Germans surrendered Paris. Fighting was still ongoing in the city and Hemingway was itching to be a part of it. However, hotel manager, Claude Auzello informed Hemingway that the Germans had abandoned the hotel. Unconvinced, Hemingway, wearing a combat uniform, directed his men to storm the hotel and clear it of any Germans that may be hiding.

Hemingway’s younger brother, Leicester, later wrote that his brother searched the Ritz’s cellar and took two Germans prisoner along with a stock of Brandy. After clearing the hotel floor by floor, Hemingway and his men made it up to the roof where they found only hanging sheets drying in the wind. They shot the sheets full of holes lest they concealed any more hiding Germans. During his “liberation” of the Ritz, Hemingway also reportedly ran up a tab of between 40-51 martinis at the bar. He later wrote the short story A Room on the Garden Side based on his time at the Ritz after the liberation of Paris.

Of course, such a stunt did not go unnoticed and members of the American military command pushed for Hemingway to be courtmartialed for carrying a weapon as a war correspondent. However, the trial of such a notable American figure would be an embarrassment for all parties involved. Instead, he was awarded the Bronze Star Medal in 1947 for circulating “freely under fire in combat areas in order to obtain an accurate picture of conditions. Through his talent of expression, Mr. Hemingway enabled readers to obtain a vivid picture of the difficulties and triumphs of the front-line soldier and his organization in combat.”

Following his violent arrival in 1945, Ernest Hemingway became even more closely associated with the Ritz. In 1994, the Petit Bar was renamed Bar Hemingway. Photos and memorabilia of the author’s life and adventures adorn the walls and the bar is well-known for its signature “Clean Dirty Martini.” In 2002, Bar Hemingway set a Guinness World Record for the most expensive cocktail at the time: a €400 Sidecar made with an 1834 cognac. Today, the bar is a popular pilgrimage for tourists seeking a taste of Hemingway’s life in Paris.