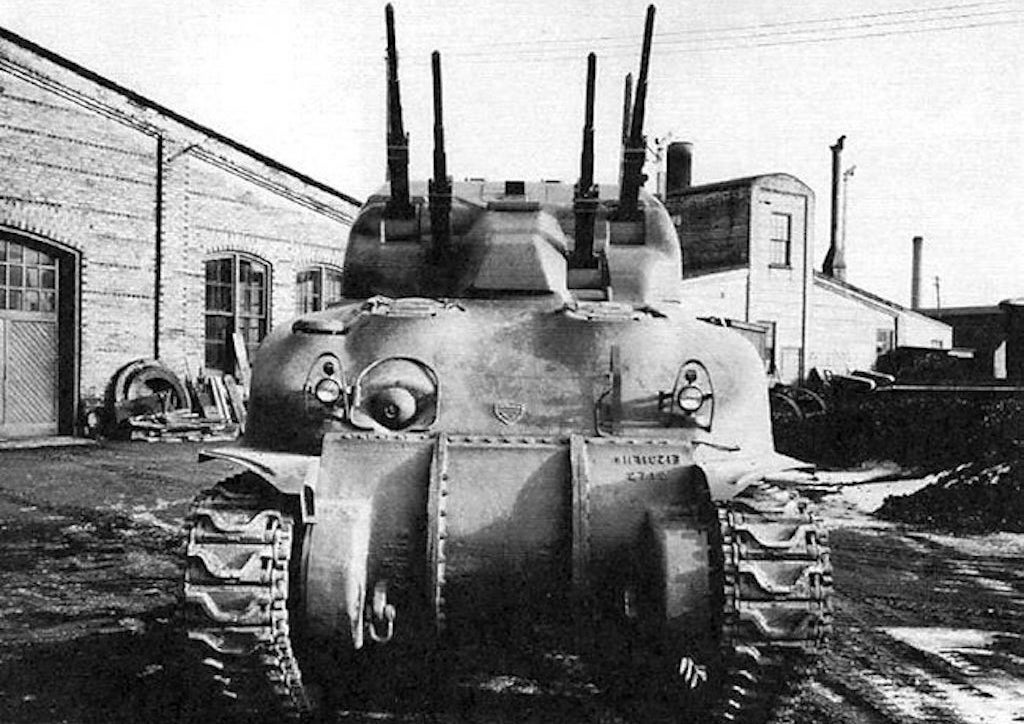 During WWII, the Allied forces agreed to largely standardize on the American M4 Sherman tank. In August 1943, Montreal Rail Works began production on an M4 Sherman for the Canadian Army designated the Grizzly I. At the same time, the Canadian Army Technical Development Board was developing a fully-enclosed quadruple 20mm anti-aircraft turret. Placing the turret on the Grizzly chassis resulted in the Tank AA, 20 mm Quad, also known as the Skink.

Following the Canadian trend of naming vehicles after animals, the Skink was named for Ontario’s only lizard. Designed to provide protected air defense to armored formations, the Skink was developed by the Canadian Army Engineering Design Branch. On September 18, 1943, a wooden mock-up was completed by the Waterloo Manufacturing Co. of Waterloo, Ontario. This resulted in the authorization of the construction of the first two welded armored pilot turrets.

In mid-December 1943, the first pilot turret was demonstrated and successfully tested on a Grizzly chassis the next month. Originally, the pilot turrets were equipped with 20mm Hispano-Suiza cannons, normally fitted to fighter planes. However, in January 1944, the British 21st Army Group standardized on the 20mm Polsten gun, a simplified version of the 20mm Oerlikon cannon. Since the First Canadian Army fell under this command, the Skink turret had to be reworked for the Polsten.

The change in gun delayed the Skink project and the first redesign wasn’t ready until April 1944. At the same time, the 21st Army Group reduced the number of AA platforms issued to each of its units. In late July 1944, with the threat of the Luftwaffe greatly reduced, the command furthered reduced its demand for AA guns to zero. The Skink contract was canceled in mid-August 1944. However, three complete vehicles were built along with eight turret kits, and the Skink did see action.

Beginning in February 6, 1945, the Skink made its way through all but one Canadian armored regiment. Although it saw no use in its intended role as an anti-aircraft platform, the Skink’s quad-20mm cannons proved useful in a ground support role. With each of its four cannons firing 650 rounds per minute, the Skink was extremely effective at flushing out pockets of German resistance. All units that fielded the unique tank reportedly found it to be quite useful. The Skink was used until March 11, 1945. All completed vehicles and turret kits were returned to Canada until they were eventually scrapped.