Messerschmitt made micro cars after WWII - We Are The Mighty

Messerschmitt made micro cars after WWII 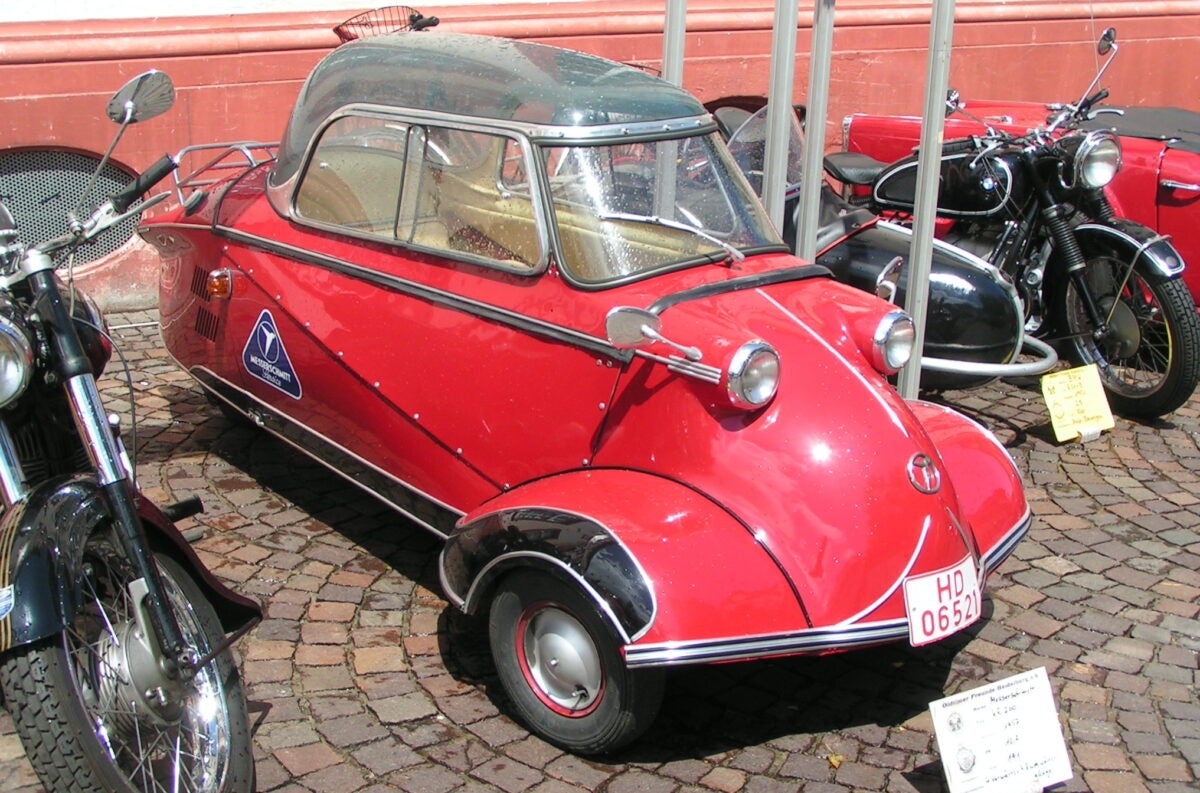 The Luftwaffe terrorized Europe during WWII. Blitzkrieg attacks by panzers and motorized infantry were supported by German fighters and bombers. Bearing the names of their designers, Junkers, Heinkel, and Messerschmitt became infamous among the Allied nations. Messerschmitt was best known for its fighter planes including the Luftwaffe’s primary fighter, the Bf 109, and the jet-powered Me 262. Although the company survived the war, it was barred from producing aircraft for ten years.

The war left Germany in a poor state. Its economy was in shambles, infrastructure was badly damaged, and manufacturing was nearly nonexistent. As the country and the continent rebuilt, fears of roadway congestion weighed heavy on people’s minds. Coupled with the scarcity and high cost of resources, European engineers turned to a radical new automobile design: the micro car.

Fritz Fend was a former Luftwaffe aeronautical engineer and technical officer. In 1948, he began building invalid carriages for disabled people. He noticed that his most popular model, the gasoline-powered Fend Fitzler tricycle, was also being purchased by able-bodied people for personal transport. Fend concluded that a two-seater model would be even more popular and adapted his design. He struck a deal with Messerschmitt to produce his new micro car at their Regensburg factory.

Introduced in 1958, the Tg500 featured the same monocoque chassis, tandem seating, and bubble canopy as the Kabinenroller tricycles. However, it was fitted with a larger engine for increased speed and four wheels for improved performance. Unofficially, the “Tg” stood for Tiger, a name that stuck with the car. Confusingly, the name “Tiger” was not only the name of the most feared German tank of WWII, but also the name of a post-war truck produced by former tank maker Krupp. Despite being manufactured by FMR, the micro car Tiger is sometimes referred to as the Messerschmitt Tiger, a name that can confuse even the most ardent of WWII enthusiasts.

Because three-wheeled cars could be driven with a more affordable motorcycle license, Kabinrollers were extremely popular in Britain where they still maintain a loyal following. Overall though, the Kabinenroller was not a commercial success. Today, Kabinenroller examples are novelties that can fetch tens of thousands of dollars depending on their condition.