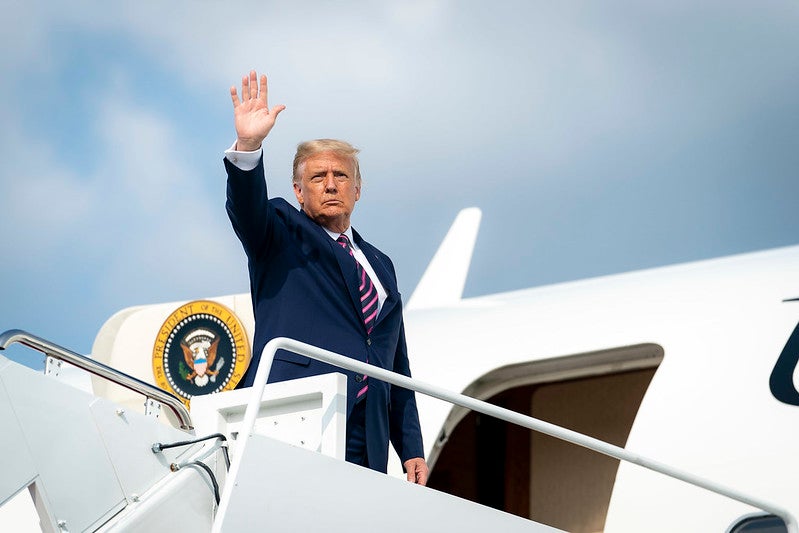 The Commander-In-Chief is more than just an American leader, the office is of global importance. As the “Leader of the Free World,” the American President has to be able to travel all over the U.S. and around the world – safely. So of course, the United States Air Force has a special plane for the President. This wasn’t always the case, however. What we call “Air Force One” isn’t the name of the plane, it’s the callsign for any plane the POTUS happens to be on (so yes, if President Biden went Groupon skydiving in a decades-old rust bucket Cessna, that plane would be Air Force One for a brief, shining moment).

The specially designed planes commonly seen as a referred to as Air Force One are two Boeing VC-25s, military versions of the 747 with some common and classified special air countermeasures. This also wasn’t always so. Earlier planes used by the President had few special features and were just like any other aircraft. Air Force One was introduced as the Presidential call sign after another plane with the same call sign entered the same airspace as President Eisenhower’s in 1953.

Although it was after he left office, Theodore Roosevelt was the first president to fly in a powered plane (because of course he was. I’m surprised he didn’t invent powered flight). He flew in a Wright Flyer near St. Louis in 1910.

The first specially outfitted plane for America’s Chief Executive was a Douglas Dolphin, in service from 1933 through 1939. Built for President Roosevelt, there are no photos of him actually flying in it, but it was there if he needed. The plane was specially outfitted with luxury upholstery and a sleeping compartment.

FDR was the first president to fly while in office, however. A Pan-Am Boeing 314 called the Dixie Clipper flew him to the Casablanca Conference in Morocco in 1943. German u-boats made travel by sea a risky prospect for American VIPs.

A modified C-87 Liberator dubbed Guess Where II was specially designed by the U.S. military to ferry President Roosevelt on international trips. It might have been the first official plane specifically designed to be Air Force One, but it was not accepted for this use.

A C-54 Skymaster was reconfigured by the U.S. Secret Service to be the President’s official mode of international transportation. Nicknamed Sacred Cow, the aircraft was fitted with a sleeping area, radio phone, and an elevator to accommodate President Roosevelt in his wheelchair. He was able to use it only once before he died, on a trip to the Yalta Conference in 1945.

President Truman signed the National Security Act of 1947 into law, creating (among other things) an independent United States Air Force. He also updated the Presidential aircraft, a C-118 Liftmaster, painted with the head of a bald eagle and nicknamed for the president’s hometown of Independence, Missouri.

When President Eisenhower’s plane (callsign Air Force 8610) was confused with an Eastern Airlines 8610, Ike was flying in a Lockheed C-121 Constellation called Columbine II. After that, any aircraft carrying the President would be called Air Force One. Eisenhower put these presidential aircraft into service, two C-121s called Columbine II and III.

In 1962, President Kennedy updated the Presidential airplane yet again, this time equipping them with jet engines. The Air Force purchased a Boeing C-137 jet for the purpose. The plane was designed by famed industrial designer Raymond Loewy to much fanfare from the Press and public. The plane, name Special Air Mission (SAM) 26000 served Presidents Kennedy through Clinton and participated in many of the late 20th century’s most iconic moments. SAM 26000 is now on display at the National Museum of the United States Air Force.

The next plane introduced to the President was SAM 27000, which served Presidents Nixon through George W. Bush. SAM 27000 was carrying President Nixon back to California after he resigned the Presidency. As Gerald Ford was sworn into office, the pilots requested their call sign be changed from Air Force One to SAM 27000. SAM 27000’s last flight took George W. Bush to Waco, Texas, where it was decommissioned. The plane is now on display at the Ronald Reagan Presidential Library and Museum in Simi Valley, Calif.

President Reagan did not make any changes to the Air Force One program, but a new plane was built during his presidency. It would be in service until 1990, when it would carry President George H.W. Bush. The plane now featured defenses from electro-magnetic pulses and secure communications systems. SAM 28000 and SAM 29000 are two military-grade Boeing 747s specially designed to carry the President. The interiors were designed by then-First Lady Nancy Reagan.

The Boeing 747-8 was the Air Force One plane during the most recent Trump administration.